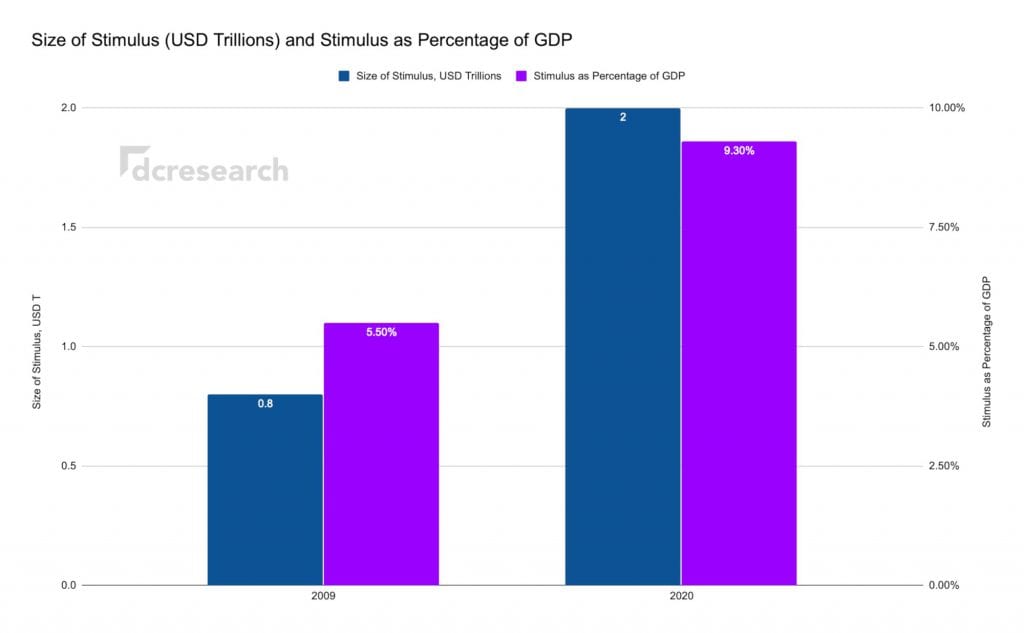 7 Paradigm Shifts and Why We’re Long on Digital Assets

The unprecedented spread of COVID-19 has been a harsh wake-up for many. In addition to its imminent threat to certain risk segments, the virus opened our eyes to the fragility of our centralized infrastructure. Those associated in decentralized systems, like bitcoin, have probably gone through this thought process before: Decentralized structures are more robust than centralized, advantages of diversification, etc. On these grounds we summarized seven upcoming paradigms shifts and why we are, more than ever, bullish on digital assets.

While we’ve seen recessions and pandemics before, the indelible uncertainty on future is what really sets COVID-19 apart from previous events. Exempli gratia, the 2008 financial crisis saw a relatively quick V-shaped recovery, mainly propelled by the monetary easing measures of FED. By some analysts, post-corona recovery might be U- or even L-shaped. The escalating uncertainty is summarized by World Uncertainty Index (WUI), charted beneath. WUI indicates level of uncertainty (392,15) not perceived since the second world war. 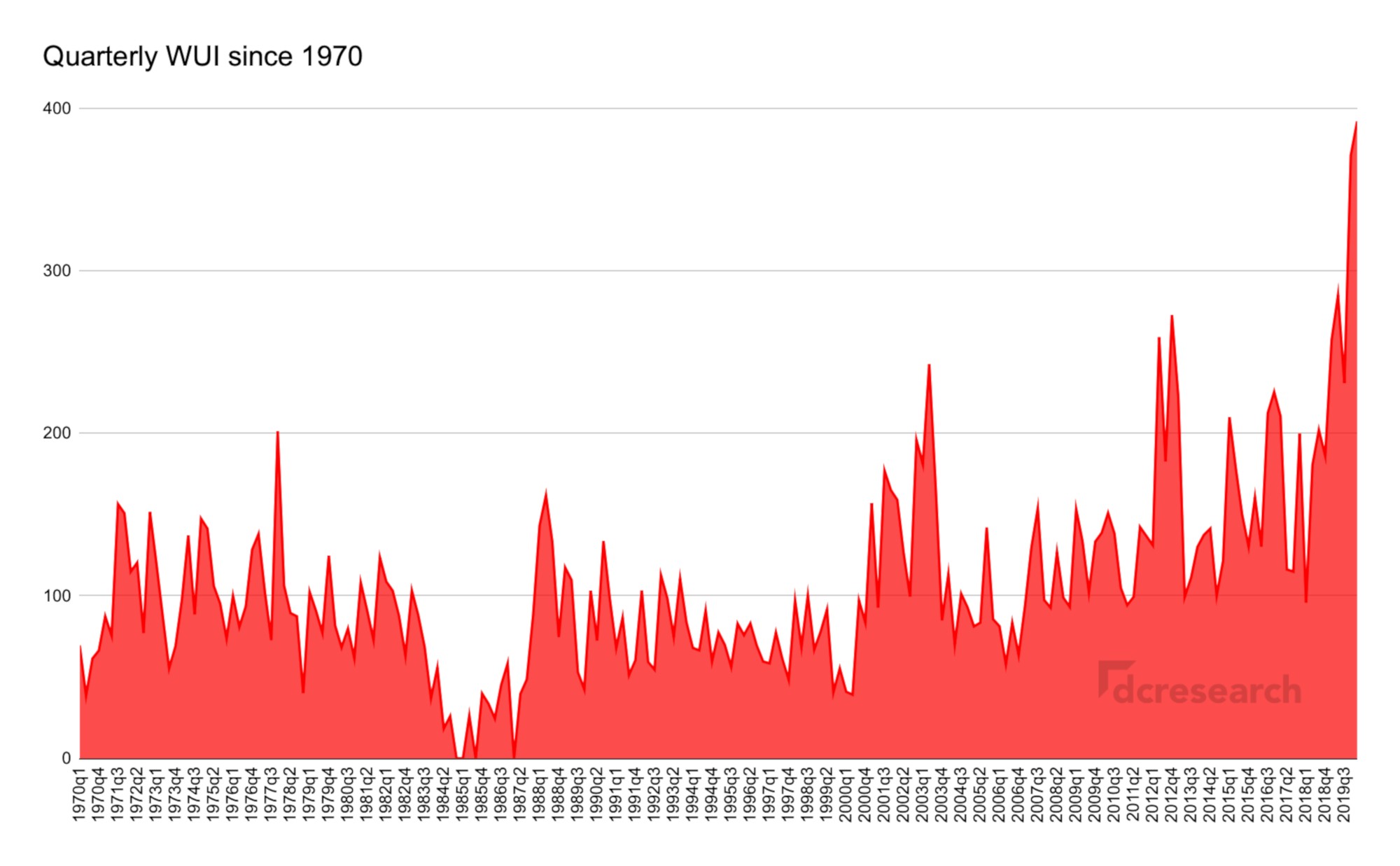 The World Uncertainty Index is computed by counting the percent of word “uncertain” (or its variant) in the Economist Intelligence Unit country reports. WUI is then rescaled by multiplying by 1 million. A higher number means higher uncertainty and vice versa. 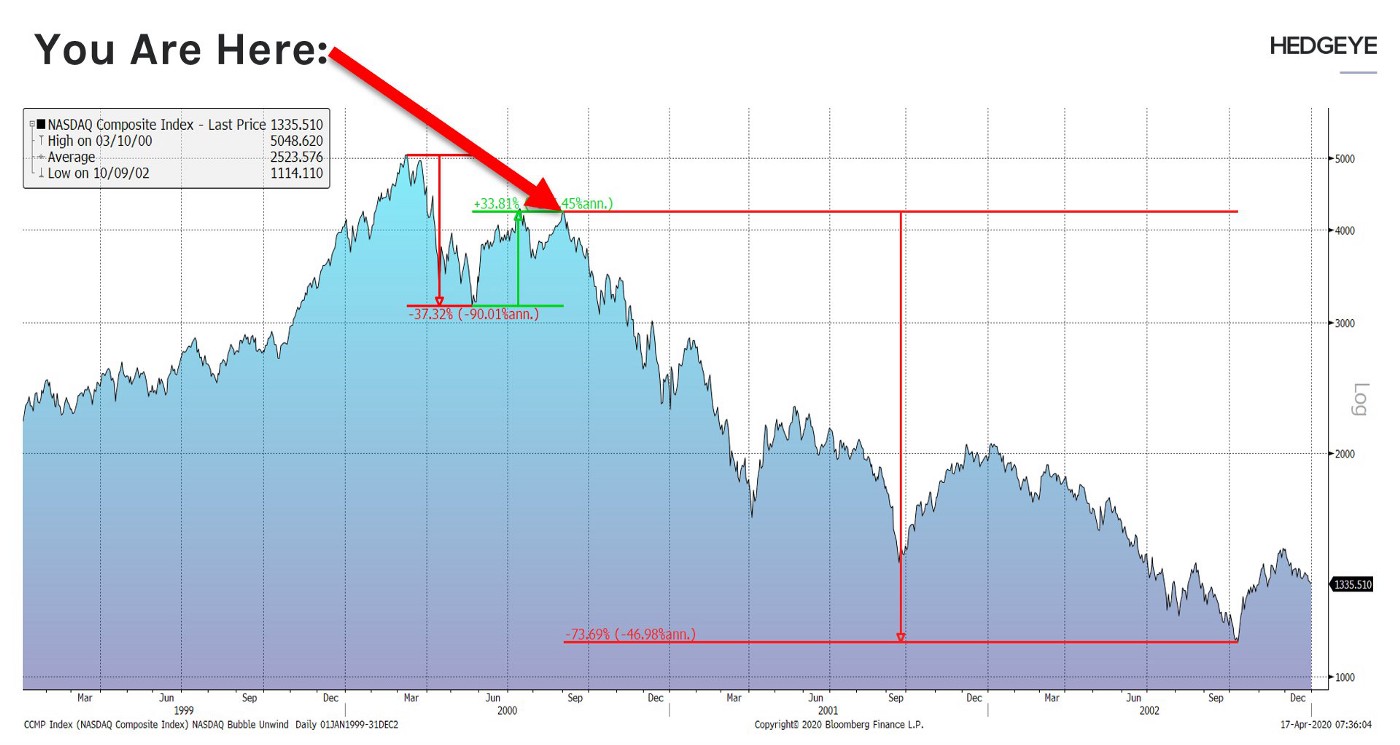 While the stock market has recovered since late March lows, many analysts still expect the worst to be ahead. Hedgeye’s assesment sees the current S&P 500 consolidation as a bull trap before more potential downside. Estimations for second quarter (Q2) performance vary significantly depending on the source:

Consequently, the best word to describe the current consensus is “uncertainty” and smart money will allocate accordingly.

One of the most interesting trends has been dollar’s superiority over fragile, mostly emerging market, national currencies. Amid COVID-19, USD practically crushed many smaller scale fiats, with liquidity escaping from EM. 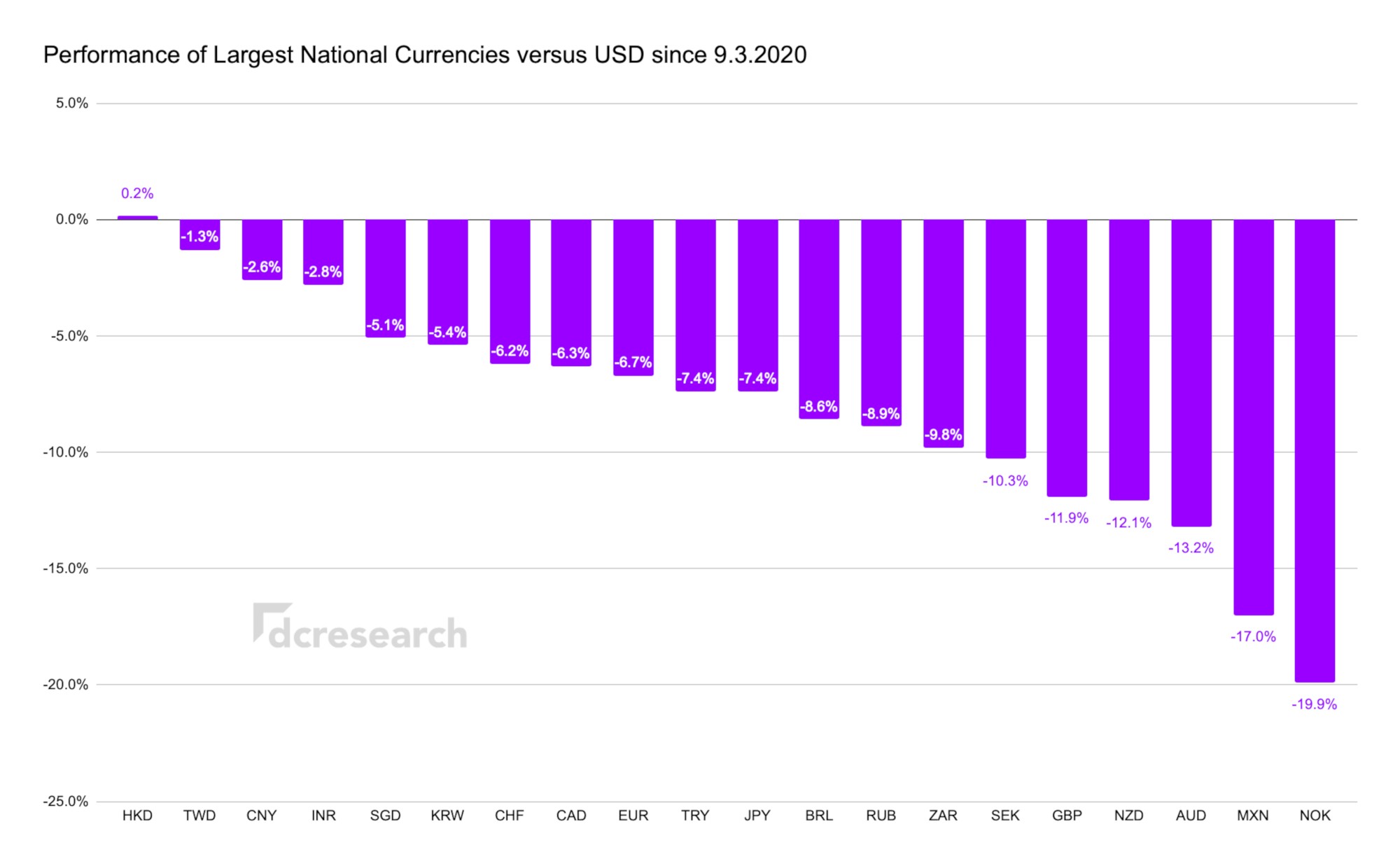 What causes USD to be so dominant against EM currencies? Here’s the general hypothesis:

-> Emerging markets nations have expansionary monetary (fiscal) policies, which are unsustainable in the long term timeframe

-> EM currencies will be exchanged into USD in an escalating manner, creating a negative feedback loop 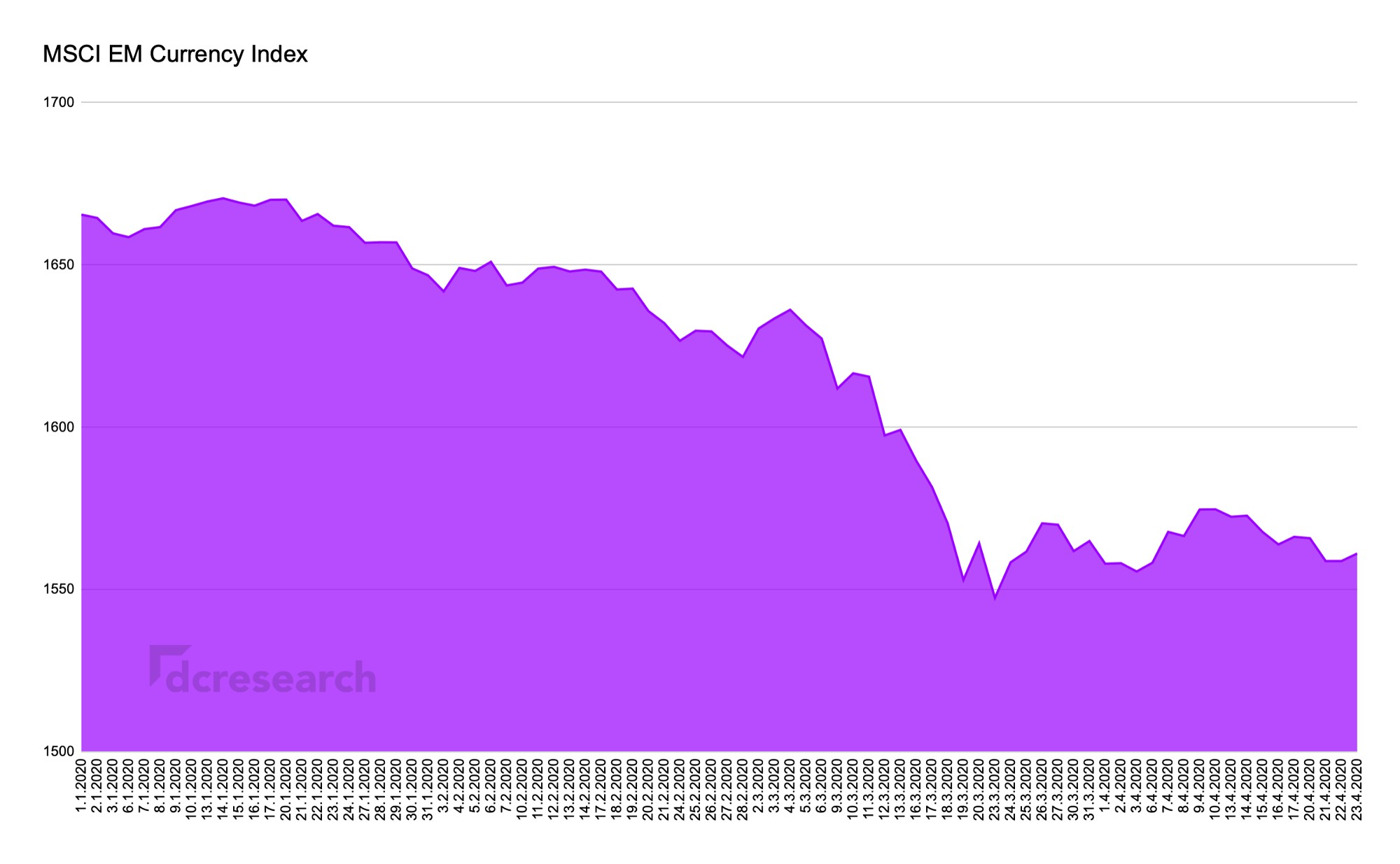 These escalatingly negative feedback loops are particulary pronounced in countries like Argentina (ARS) or Brazil (BRL) with long histories of monetary unsustainability. In practice, these countries have been covering their public sector budget deficits by printing their own fiat currency.

The negative trend of EM currencies is propitious to bitcoin as masses are using the cryptocurrency as an alternative investment, and instrument to avoid capital controls.

Over troubled times in history, the typical monetary response pursued by governments has been capital injection into the financial system. This “quantitative easing” has the goal of financing business activities in the short term, hoping to achieve an overall economic stimulus. 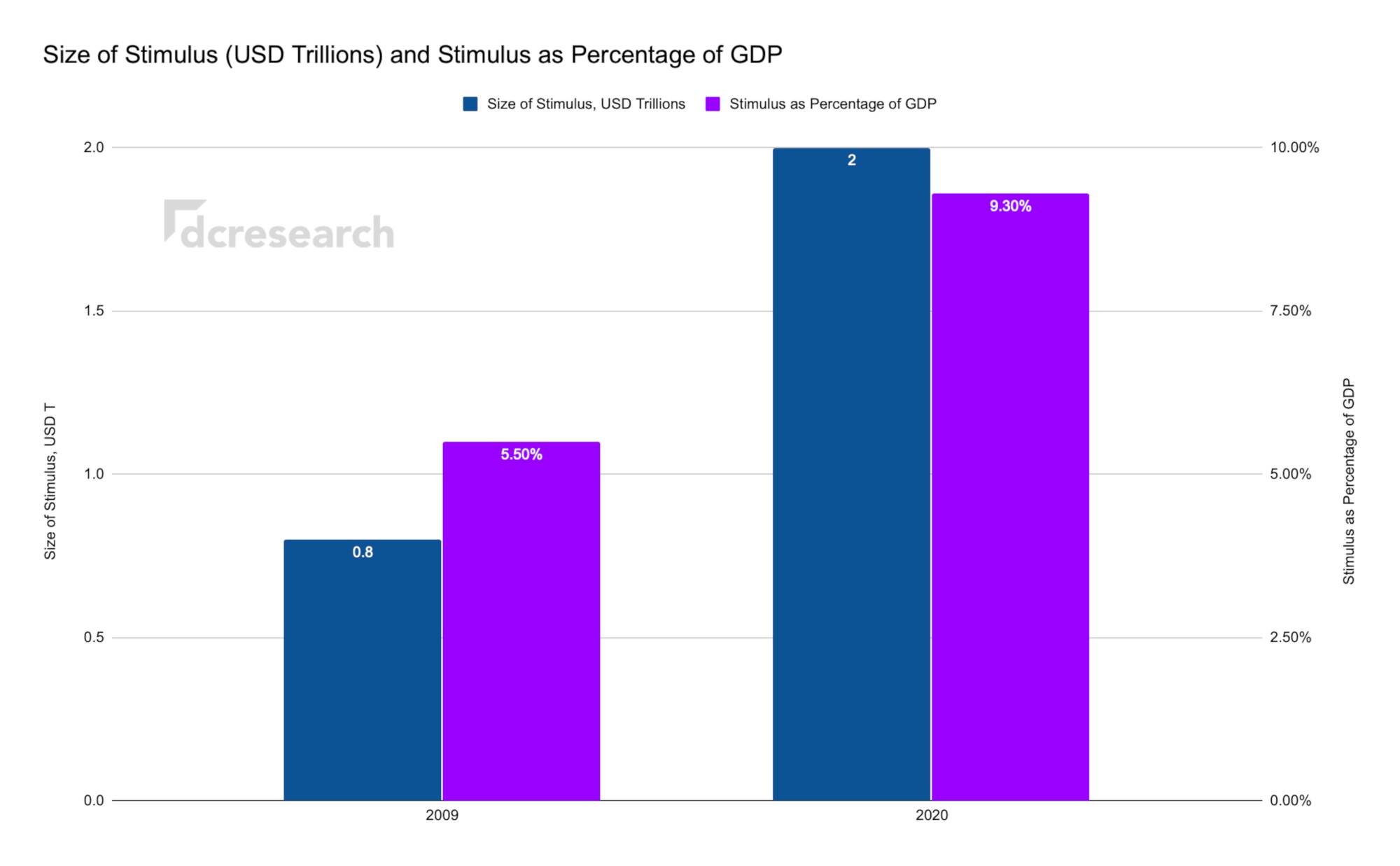 Recently, governments and central banks around the world have been injecting money into the financial system to avoid a coronavirus-induced collapse. The US alone has agreed to a stimulus package of over 2 trillion, the largest economic stimulus in US history. The 2020 stimulus package is estimated to be 9,3 percent of GDP, compared with 5,5% in 2009 (800B USD).

The stock market has decoupled from reality and is now coupled to quantitative easing (QE). Infinite "growth" is now possible.

Meanwhile the stimulus instruments might offer some short-term help, they also contain very potential drawbacks in form of growing inflation and weakening purchasing power. These effects are insidious as they’re not instantly perceived, instead becoming visible over longer timescales. 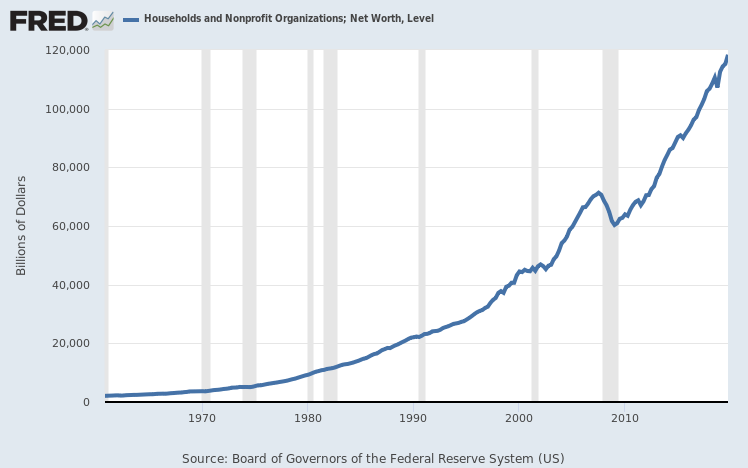 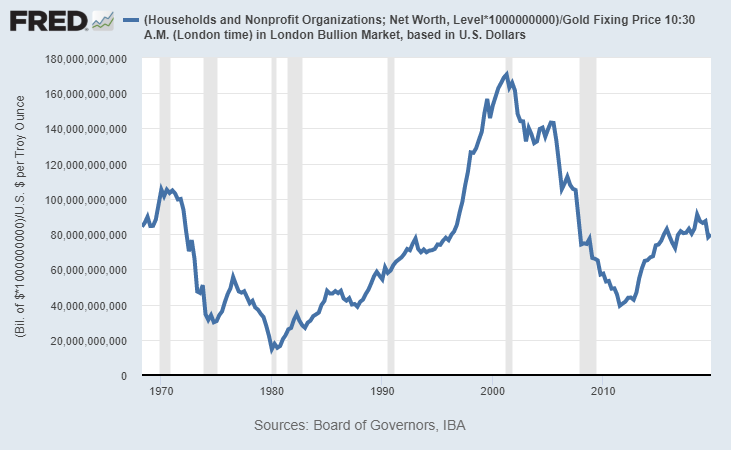 Unsustainable government spending, a perpetual trend, has been escalating recently. Increasing amount of older age segments, rising social costs, and other obligations are the main factors behind government spending going through the roof.

Eurozone, as usual, is one of the definitive hot spots for unsustainable balance sheets. There’s an unfortunate correlation with EU countries located closer to Mediterranean sea and growing budget deficits. COVID-19 has been acting as a catalyst for potential defaults and EU is currently discussing the possibility of “eurobonds” to save the troubled member countries.

While the interweaving of markets has statistically benefited the global economy, COVID-19 has exposed fundamental weaknesses related to it. The main upside of globalization has said to be increasing global stability as countries lifelines are becoming increasingly dependent on each other.

The most probable outcome will likely be weakening globalization. The global trade infrastructure won’t disappear overnight, however we might be past the peak globalization phase.

Another imminent upcoming paradigm shift is increasing decentralization. As COVID-19 exposed the fragile nature of centralized ecosystems, a shift towards decentralized ones would be organic.

Bitcoin, a now over 10 year old network, is acting as a platform for new innovation. So called layer 2 applications like Lightning and Liquid are growing becoming seminal for the ecosystem. Recently the Liquid network, originally created by Blockstream, overtook Lightning in terms of bitcoin held within the network. 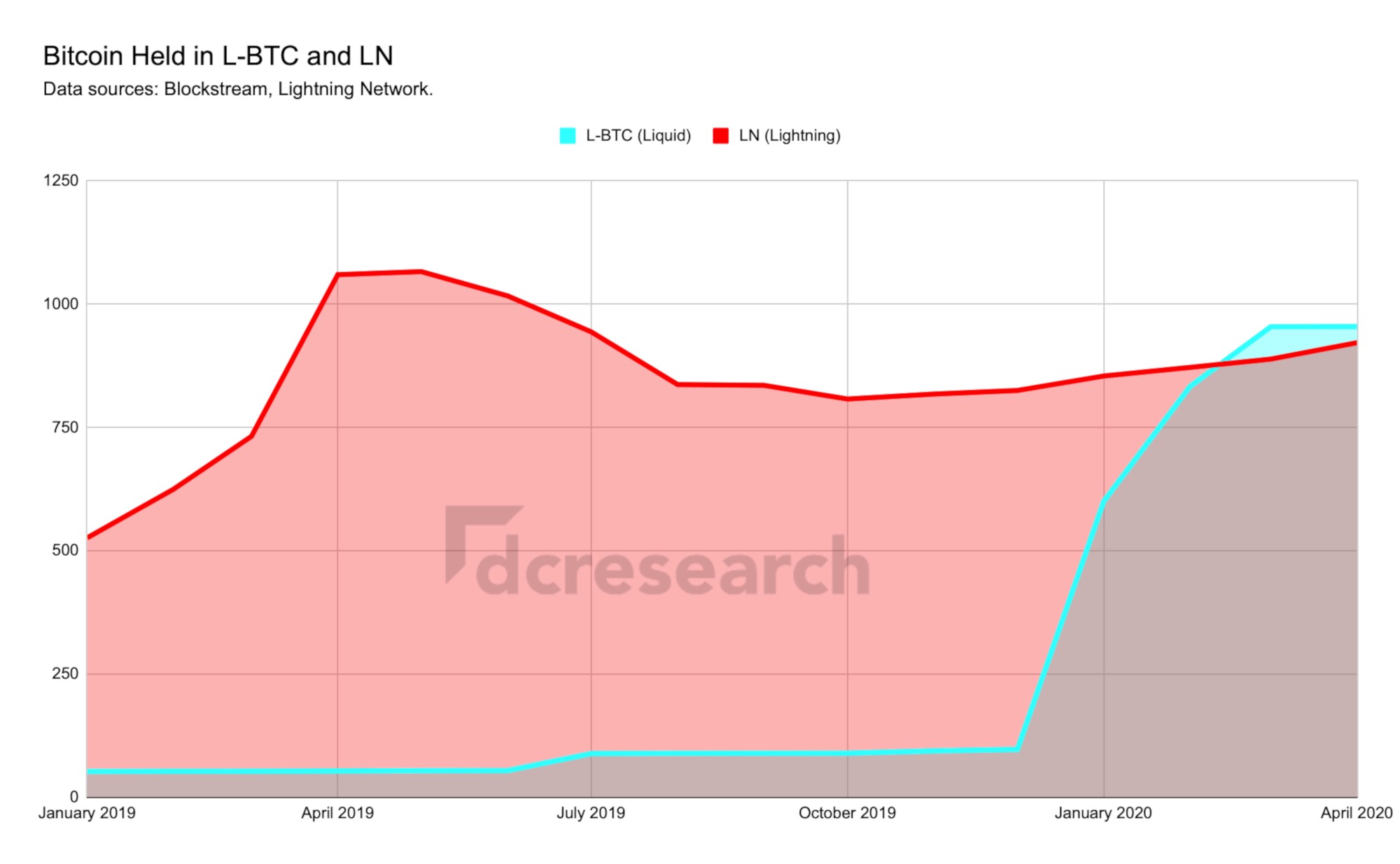 Liquid, originally launched by Blockstream, is bitcoin’s first sidechain and a stepping stone towards new decentralized financial ecosystem. While the actual Liquid network is governed by the U.S. company, Liquid technology itself can be used open-source. Liquid was originally developed as Elements project and allows anyone to fork it, like the founders behind Liquiditi have done recently.

Decentralized ecosystems like DAOs (Decentralized Autonomous Organization) have prominent future potential. While the very first public DAO project, simply called DAO, collapsed after a notorious hack in 2016, we’re experiencing a renaissance of DAOs. Large-cap projects like Dash, Decred, and Horizen each have their own DAO layers. While our world is becoming incrementally digital, decentralized structures will be an organic addition to these ecosystems.

Decentralization does not just avoid single points of failure, it also helps to improve privacy. A powerful central party will always be able to gather more information on a given user than a peer in a truly distributed system would. 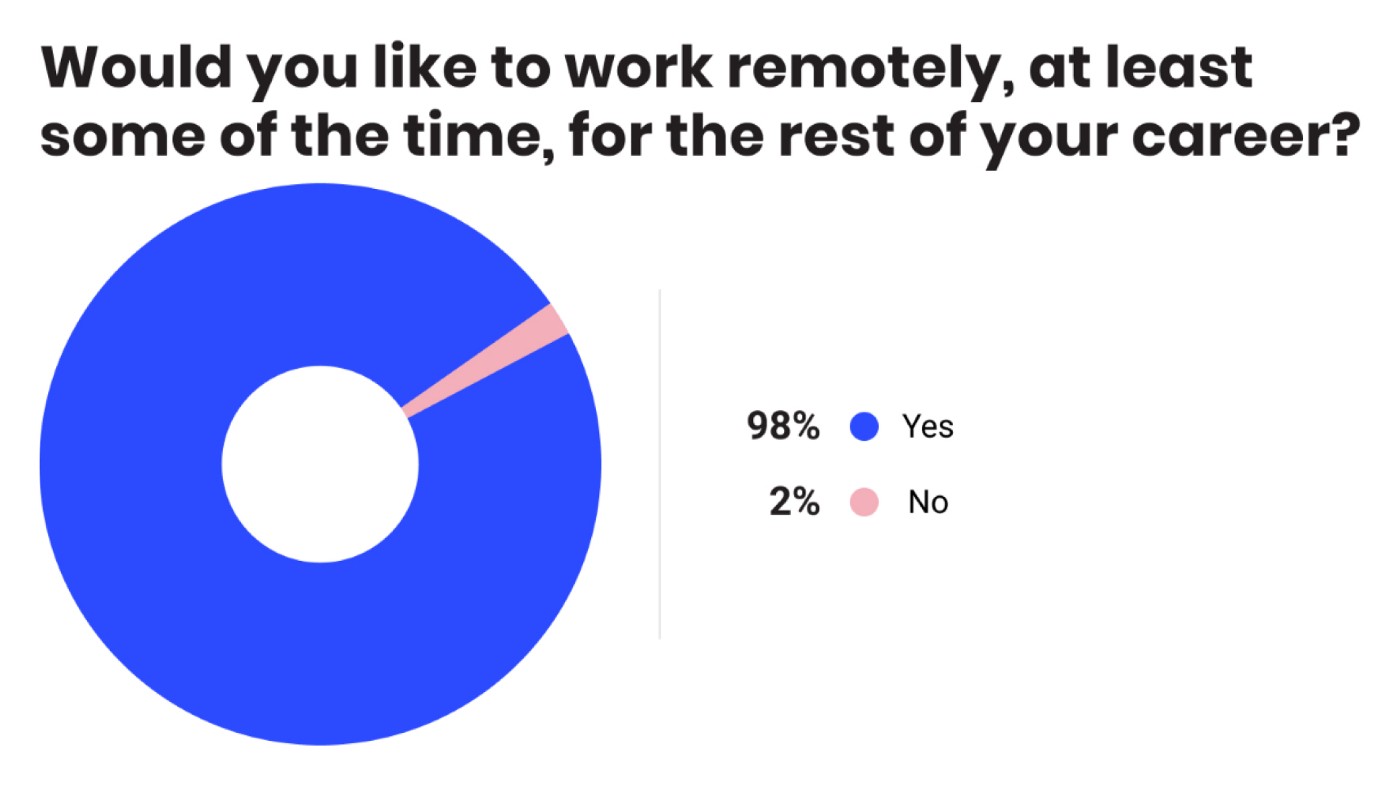 We already live in significantly digitalized society. The shifting consumer behaviour will likely lead to even more pronounced digital society and ecosystems. A recent study indicates that majority of executives would prefer remote working over office, at least some time, during their career paths.

Another paradigm shift driving remote working and meetings will be declining airtravel, at least in short-time timeframe. We’re about to see many airlines to liquidate, large essential carriers are likely to get bail-outs by state. 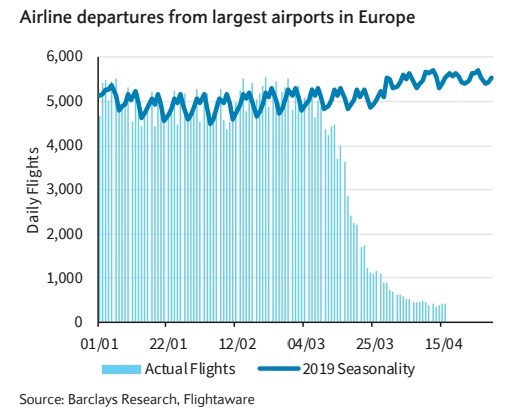 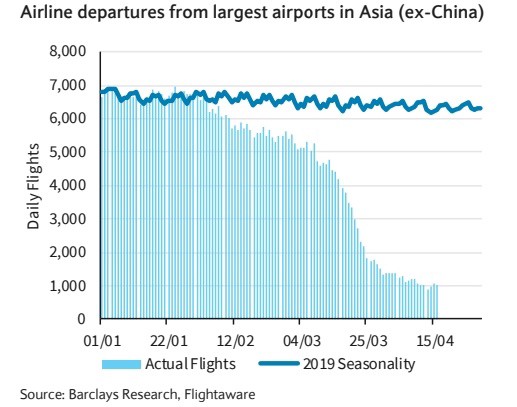 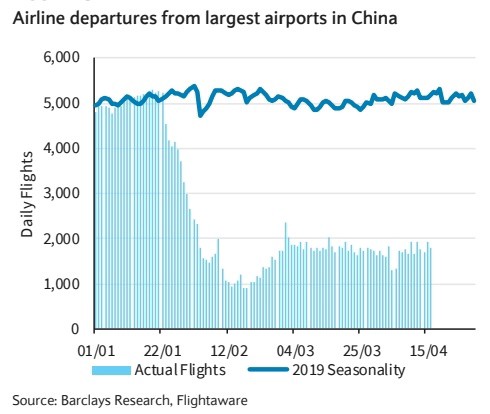 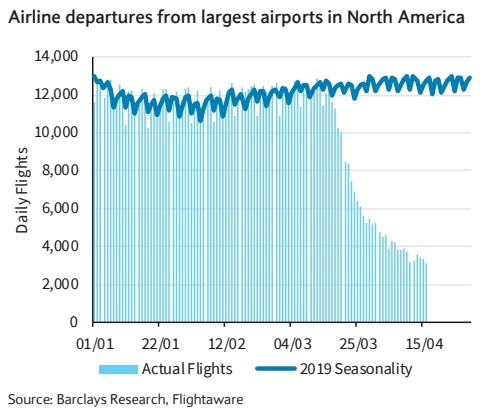 Amid the travel lockdown, the use of software and applications is booming. Coronavirus-triggered social distancing, isolation and lockdowns have driven-up the use of financial apps in Europe by 72 percent in a week.

Concurrently with increasing abundance of fiat money, scarce assets are becoming more valuable. Gold saw a huge increase in price in first quarter of 2020, bitcoin’s performance has been satisfactory compared with the holistic market meltdown. When assessing scarcity, precious metals are a good benchmark for bitcoin, using the stock-to-flow (S2F) model. 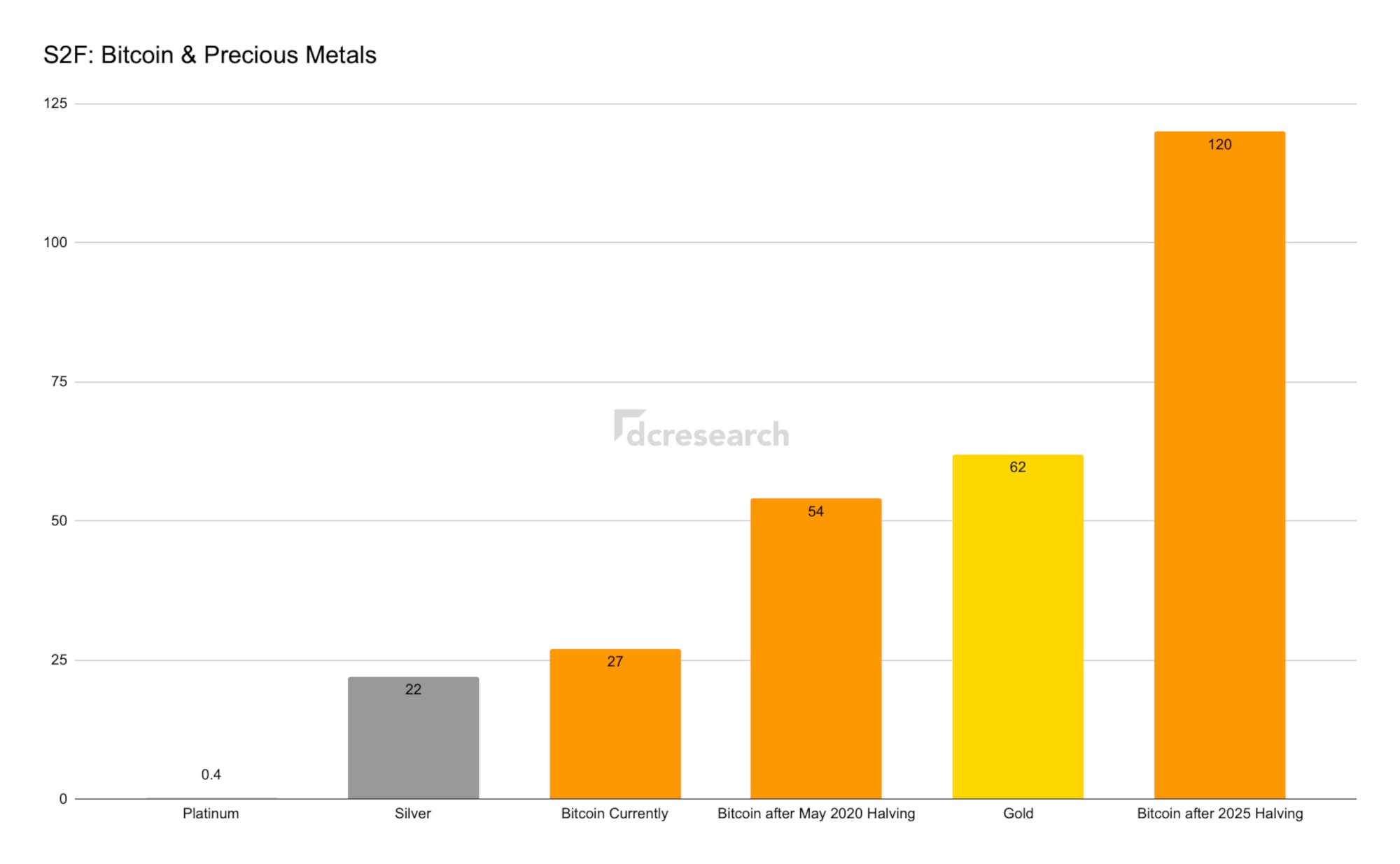 Platinum currently has a 0,4 S2F, which is relatively low. Silver however has 22 S2F, which is closer to bitcoin’s current S2F. Noticeably, the upcoming May 2020 bitcoin halving will elevate bitcoin’s S2F to 54, making it significantly more scarce. Gold’s current stock-to-flow is 62. The estimated S2F for bitcoin after 2025 halving will be 120, making bitcoin extremely scarce. Only 21 million bitcoin units will ever exist.

Bitcoin halving is a process of dividing the number of generated rewards per block in order to maintain the total supply of Bitcoin, which will not exceed 21 million units. Block rewards are the main engine of Bitcoin mining and, therefore, the main infrastructure behind the network.