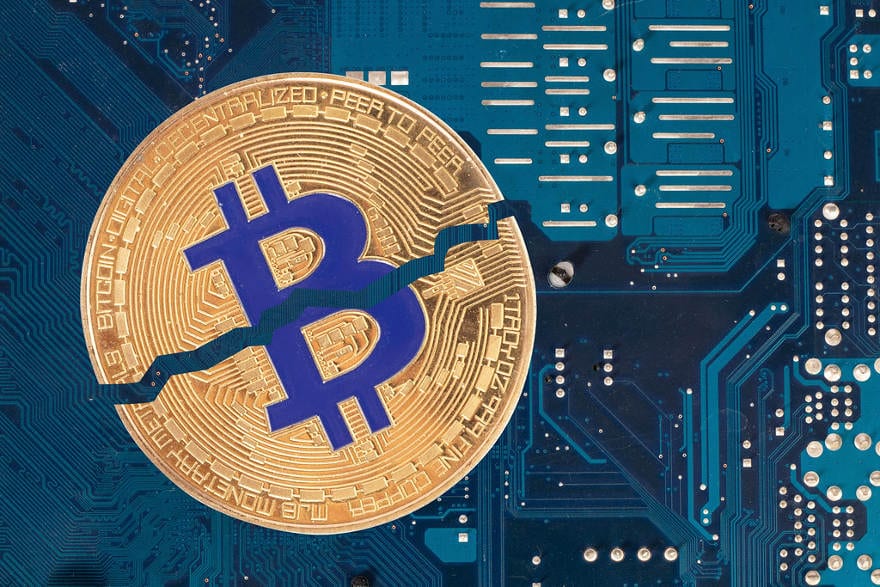 The past week has been bloody on the cryptocurrency markets, but for Bitcoin it’s business as usual. Bitcoin seems to even enjoy and gain vitality from these bloodbaths like the legendary countess Bathory.

Despite falling below $7 000 dollars for the first time this year since May, Bitcoin continues to grow. With the next block reward halving approaching, there are signs this growth may only accelerate. If the laws of supply and demand apply, this event will likely be followed by a price rise much like earlier in history.

This week we will address Bitcoin’s upcoming block reward halving and what it means. In other news we have the OneCoin scam, the recent attack against Monero and Lamborghinis in blockchain among other things.

If you’re interested in a closer look at bitcoin’s price development it’s worth reading our latest market analysis.

Bitcoin is becoming rarer than gold

Henry Brade, chairman of the board for Prasos operating the Coinmotion service, has been interviewed in an investment extra by Helsingin Sanomat. In the interview Brade speaks of the upcoming block reward halving taking place next spring.

”After next year Bitcoin will already be a scarcer commodity than gold. The currency’s mining has been halved two times earlier, and both times were followed by a strong price rise. That may happen this time as well,” Brade states.

Block reward halving means that the amount of new bitcoins generated decreases by half. Halving events take place roughly between four years and are built in bitcoin’s algorithm. This in turn means the supply of bitcoins decreases significantly.

If the demand for bitcoins remains stable or at least doesn’t decrease notably, the block reward halving will likely lead to price rise. In case of increasing demand the price rise will be even stronger.

The OneCoin scam has stolen billions

According to documents by the finnish news agency Yle, at least 20 000 Finns have been victimized by the OneCoin scam pretending to be a virtual currency. In total Finns have lost up to 40 million euros to OneCoin, while the sum globally is counted in billions.

The OneCoin scam operated similar to a classic pyramid scheme. Victims were sold “training packages” which were mandatory in order to gain the right to “invest” in OneCoin. Victims were also encouraged to recruit more victims with promises of profits for every new member added to the network. In reality no virtual currency ever existed and OneCoin’s promises were left empty.

Konstantin Ignatov, brother of OneCoin’s founder Ruja Ignatova, has now been apprehended in the United States. Facing charges ranging from fraud to money laundering, Ignatov has admitted his guilt and signed a confession stating OneCoin was a scam. If the court condems Ignatov, he may face up to 90 years in prison. Ruja Ignatova in turn has disappeared.

Globally the OneCoin scam has managed to steal billions worth of money. According to U.S. authorities the scam has stolen a total of $4 billion dollars worldwide, while other sources claim the real sum is closer to $15 billion.

Bitcoin ATMs have exceeded the limit of 6 000 units. According to Coin ATM Radar there are 6 036 Bitcoin ATMs at the time of writing. The real amount is even bigger, since Coin TM Radar does not list all the world’s automats.

Right now Bitcoin ATMs can be found in 75 different countries. An overwhelming majority is located in the U.S. with 4 154 automats, followed by Canada with 730 automats and Great Britain with 295 automats.

The growth of Bitcoin ATMs is very useful for the growth of Bitcoin’s use. With ATMs anyone can send money fast and affordably from one country to another. The receiver can also withdraw the transferred bitcoins as local fiat currency.

The official webpage of the anonymous cryptocurrency Monero has been targeted by hackers. As a result the downloadable Monero software was infected with malware capable of stealing users’ cryptocurrencies. The coin’s developer team disclosed the incident on 19th November.

“I can confirm that the malicious binary is stealing coins. Roughly 9 hours after I ran the binary a single transaction drained the wallet,” an investor using the name Serhack reported.

Monero has been designed specifically for anonymous transactions and crypto use. Therefore it seems unlikely that the hackers and stolen funds would be traced.

After the infected software was discovered it was removed and replaced with a real clean software. If users suspect their Monero software is infected they are recommended to download it again.

The Tor Project behind the popular Tor Browser has started accepting bitcoin donations via the Lightning Network. Tor Browser is an open-source software developed from Firefox allowing access to the encrypted and anonymous Tor network.

Aside from Bitcoin the Tor Project is also accepting other cryptocurrencies, such as Litecoin, Monero and Dogecoin. However, its primary funding comes from the U.S. government.

The Tor network and Bitcoin have walked hand in hand already for years. Before Bitcoin became more generally known most of its use took place in the Tor network.

Tor and Bitcoin are in many ways similar projects. Both have the primary purpose of increasing the personal freedom of citizens and protecting it from outside interference.

Future Lambos will be stored in blockchain

Luxury car producer Lamborghini has published a new project with the intent of using blockchain technology to verify the authenticity of sold Lamborghinis. The blockchain is set to ease the complex processes related to selling luxury cars.

“When a Lamborghini is resold, the vehicle often goes through 800 to 1,000 certification checks that take place at the Lamborghini headquarters in Sant’Agata Bolognese, Italy,” Lamborghini reports.

These checks often include certifying the authenticity of every part, documenting repair reports and several photographing events. With blockchain many of these steps could be automatized and the risk of errors minimized.

“In the future, each vehicle will come with an immutable record of service, including restoration, prior ownership and more, and each car will be armed against potential counterfeiting,” states Salesforce working on the blockchain.

In crypto circles Lamborghini has gained the status of a meme. Acquiring an own “Lambo” is more or less humorously regarded as a goal for crypto investors.

Cryptocurrency enthusiast who has several years of experience about using cryptocurrencies and writing about them.
PrevPreviousWould you rather lose money or listen to Warren Buffett?
NextBitcoin is a safe haven in economic crises – Weekly news 48/2019Next
Sign up