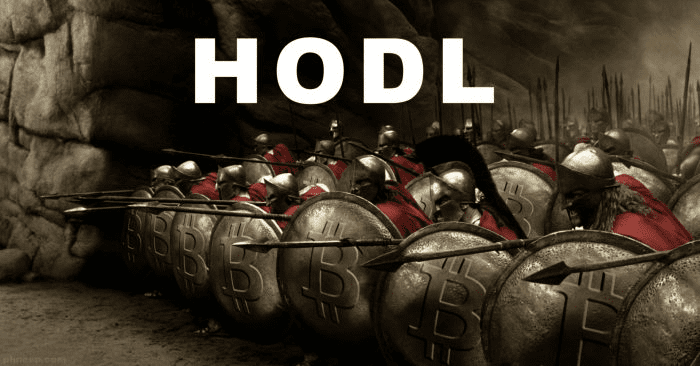 Bitcoin’s impressive rise this year in our corona-ridden world has certainly not been ignored by investors. Last week we talked about how a Nasdaq-listed company had taken Bitcoin as its own reserve currency. Now statistics in turn seem to show that investors are prepared to more actively hodl. This intentionally misspelled form of the word “hold” means investing in bitcoin with long term prospects.

The last time bitcoins were hodled as much was back in 2018. After that markets have rumbled and many have kept their money available for easy liquidation on exchange accounts. Now an increasing amount of people are transferring their coins to their own wallets, which usually implicates intentions to store them over a longer period.

In other news we have an altcoin which surpassed bitcoin in unit value. Additionally we will check out bitcoin transactions in space and other curiosities.

The number of hodlers has grown

The number of bitcoins held in exchanges has sunk to its lowest levels in 21 months, reports blockchain analysis firm Glassnode. Last Monday exchanges had a total of 2 610 000 bitcoins, which marks the lowest level since November 2018.

Investors tend to transfer bitcoins to exchanges when they prepare to sell them. This usually indicates investors expect bitcoin’s price to decrease in the near future.

However, when belief in price rise is strong, investors tend to move bitcoins to their own wallets, in which they are often safer than with exchanges. Last week the number of bitcoins held in exchanges dropped 1.4%. Counted from last month the drop amounts to as much as 3%.

Bitcoins were sent in space

The first cosmic transaction in the Bitcoin network has been executed successfully. British blockchain company SpaceChain reported having transferred bitcoins from a physical BTC wallet located on the International Space Station.

SpaceChain works in collaboration with the European Space Agency, whereby it has access to research resources such as ISS equipment. The Bitcoin wallet in question was delivered to the ISS at the end of last year.

Bitcoin is almost as big as PayPal

Bitcoin’s rise in relation to fiat currencies can be explained by new investors. The corona pandemic with its ensuing national stimulus packages and new money created have alerted an increasing amount of investors to see the potential of Bitcoin and other cryptocurrencies.

If bitcoin’s price will continue rising to higher levels, the cryptocurrency will soon surpass the market cap of Bank of America and PayPal.

The Bitcoin network’s hash rate, or computing power, has reached a new record. According to Blockchain.com, Bitcoin’s hash rate reached a new average high for seven days on the 15th of August, when the average hash rate peaked at 129.075 terahash per second.

The growing hash rate indicates that at least miners believe bitcoin’s price will either grow or remain at current levels. There is often much correlation between bitcoin’s price and its computing power.

Last time Bitcoin’s hash rate broke records was the 28th of July, after which it entered a moderate decline. The higher the Bitcoin network’s hash rate is, the safer the network remains from outside disturbances.

The popular Ripple blockchain project has been forked into a new blockchan utility called XRP Spark or FXRP. The point of XRP Spark is to combine a new Flare network with Ripple’s network and enable smart contracts in the system.

Flare’s Spark token is bound to the number of XRP and initially distributed to XRP owners through a kind of airdrop, in which every independent XRP owner can acquire an equal amount of FXRP.

Coinmotion has at least at this point no intention of supporting FXRP. Different forks are nowadays generated constantly and most of them are either scams or otherwise problematic.

Implementing all new fork tokens would bring minimal benefit for users, since very few of them have any significant future. So far FXRP appears like such a project.

YFI surpassed the price of BTC

The YFI crypto token has become the first significant cryptocurrency whose price has surpassed bitcoin’s. Currently the unit price of YFI is over $14 600 dollars. Bitcoin’s unit price in turn is roughly $11 800 dollars.

Earlier bitcoin’s price has been exceeded only by marginal cryptocurrencies with no real exchange volume and often linked to pump and dump scams. YFI in turn is exchanged for over $176 million dollars on a daily basis.

YFI is the native crypto token of the Yearn.finance protocol. Yearn is claimed to be the first protocol in the Ethereum blockchain completely controlled by token holders.

“If you’re not familiar with Yearn, you can think of it as a smart bank account that automatically allocates your assets to different low-risk investment strategies that execute on the Ethereum blockchain,” explains cryptocurrency researcher Hasu.

Despite its high unit price, YFI still remains very small compared to Bitcoin. Bitcoin is used notably more with a max supply of 21 million units, while YFI is capped at only 30 000 units. The $437 billion market cap of YFI also pales in comparison to Bitcoin’s market cap exceeding $200 billion.