Incremental growth in emerging markets (EM) has been an ongoing phenomenon in bitcoin adoption since the inception of bitcoin. In contrast to developed markets, saturated with premium-level banking services and investment options, the emerging markets still lack fundamental-level stability.

Geopolitical factors are also part of the spectrum. The strength of US dollar often correlates negatively with weaker national (fiat) currencies in the developing world. USD can even be considered a “safe haven asset”, backed by the most dominant economic and military authority globally. USD still earns its position as global reserve currency, with no serious competition in short to medium-term sight.

Bitcoin, however, is not backed by any central authority, making it hypothetically even better safe haven than gold or USD. Bitcoin’s decentralized nature offers an antifragile value proposition, unmatched by any asset class. These features maintain bitcoin’s desirability in emerging markets.

A research released by Passport Capital during late Q1 2019, clearly shows that emerging & frontier markets overtook developed markets already during the spring 2017. The research was conducted by stacking LocalBitcoins’ transactional data. Peer-to-peer trading volume conducted through the site in emerging and frontier markets now surpasses volume in the developed world, and it’s not as responsive to price fluctuations.

One of the most relevant examples of bitcoin’s EM-related performance is Argentina. Argentinian peso (ARS) collapsed >30% against USD within a day, amid escalating political risk. Argentina has a history of failed governmental & monetary policies, suffering great depressions during 1974–1990 and 1998–2002. The country is a prime example of growing bitcoin adoption in a low-trust environment.

Emerging markets additionally act as an indicator to larger paradigm shifts. We’re currently 11 years past 2008 subprime crisis and followed recession. The formula that triggers next downturn is still unknown, however emerging markets will be the first ones to feel the consequences.

Next we’ll dive into 4 emerging market countries, and explore why each of them is an uniquely organic environment for bitcoin growth. 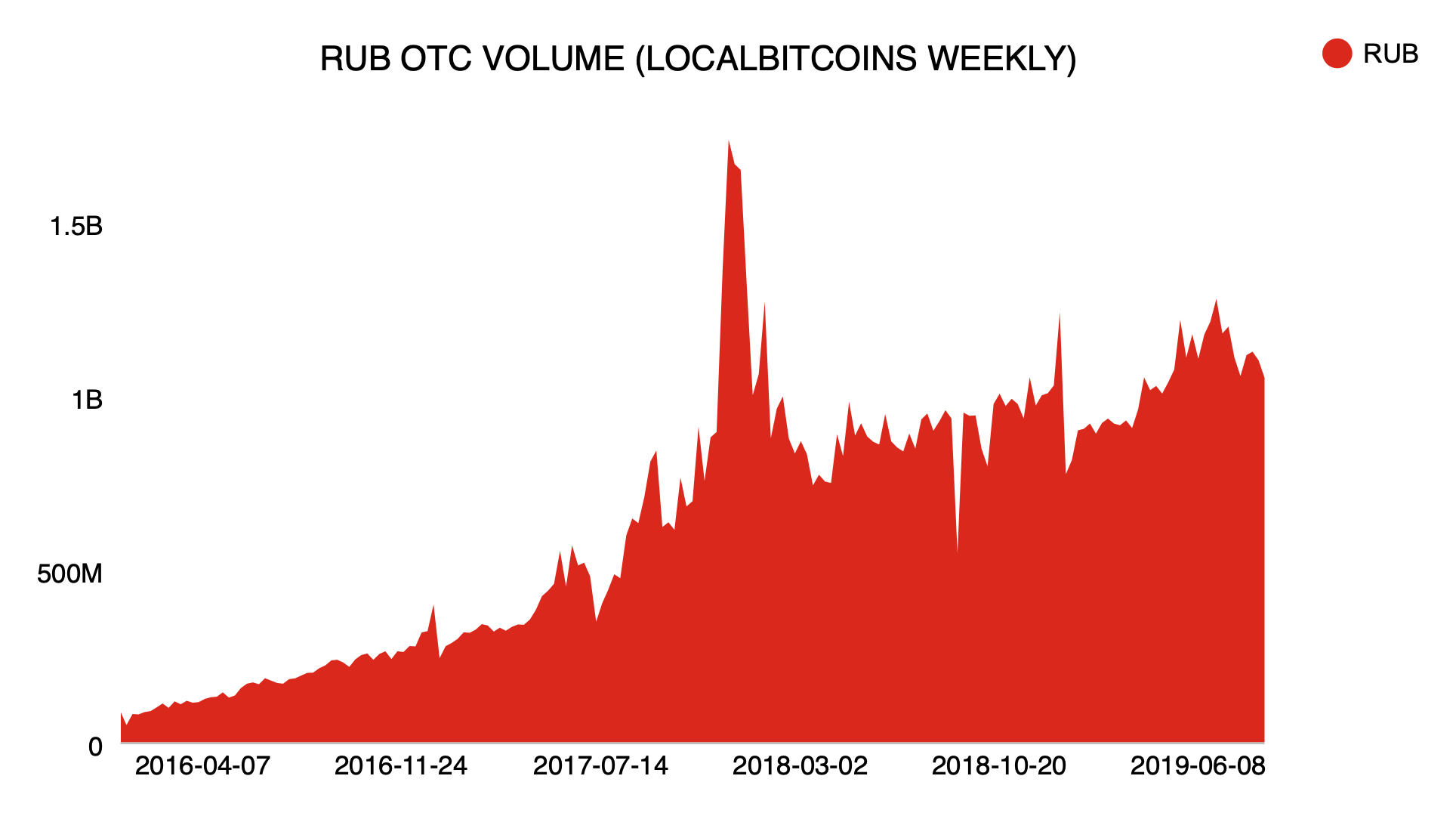 Russia has traditionally been a location for strong bitcoin growth, especially within OTC (over the counter) market. The popularity of OTC transactions stems partially from the lack of proper Russian exchanges. Consequently by 2018 data, Russia was the biggest sovereign market for LocalBitcoins.

Topping at 1,7B rubles during peak demand of late Q4 2017, the weekly OTC volume consistently stayed on the verge and above 1 billion RUB. While a developing and rich with raw materials and talent, Russia copes with challenges within local politics and corruption. With a population of 145 million people, Russia also represents a huge market for bitcoin adoption. 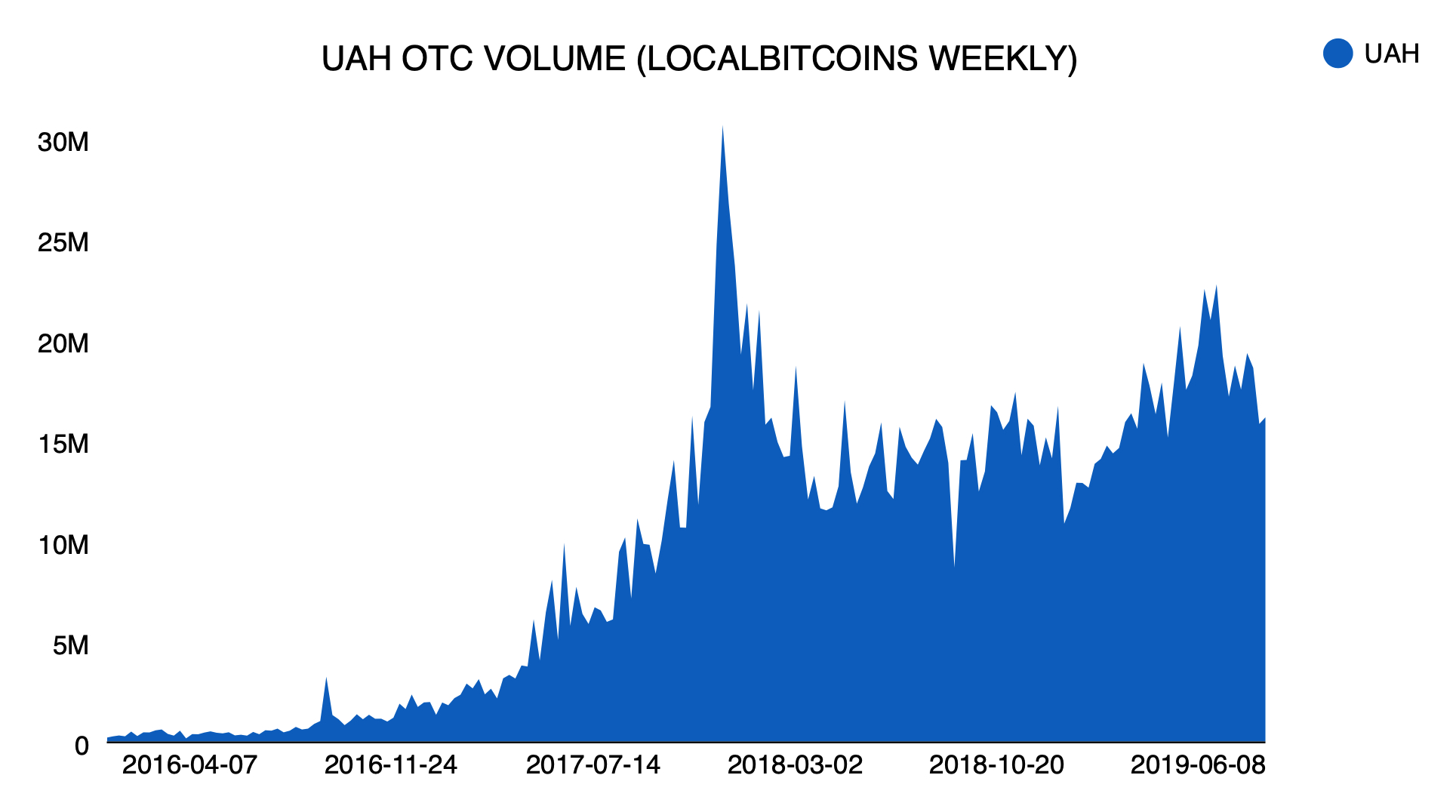 Another post-Soviet state, Ukraine has seen extensive bitcoin adoption. Similarily to Russia, OTC market is especially popular in the country. LocalBitcoins’ OTC data shows volume peaking at 30 million hryvnia (UAH) during late 2017, while staying steadily around 15M weekly throughout 2018 and 2019.

Ukraine has been plagued by unfortunate inflation rates and poor monetary policies. The country suffered from hyperinflation in the early 1990s because of a lack of access to financial markets and massive monetary expansion to finance government spending, while output declined sharply. UAH’s inflation has stayed high since, 12,4% in 2016 and 13,7% in 2017 respectively.

While a country well-known of its IT sector and developer talent, Ukraine’s macro-level outlook is still shadowed by conflict in eastern parts. As the situation remains in flux for the time being, one could forecast the demand for alternative non-correlated assets to remain wide. 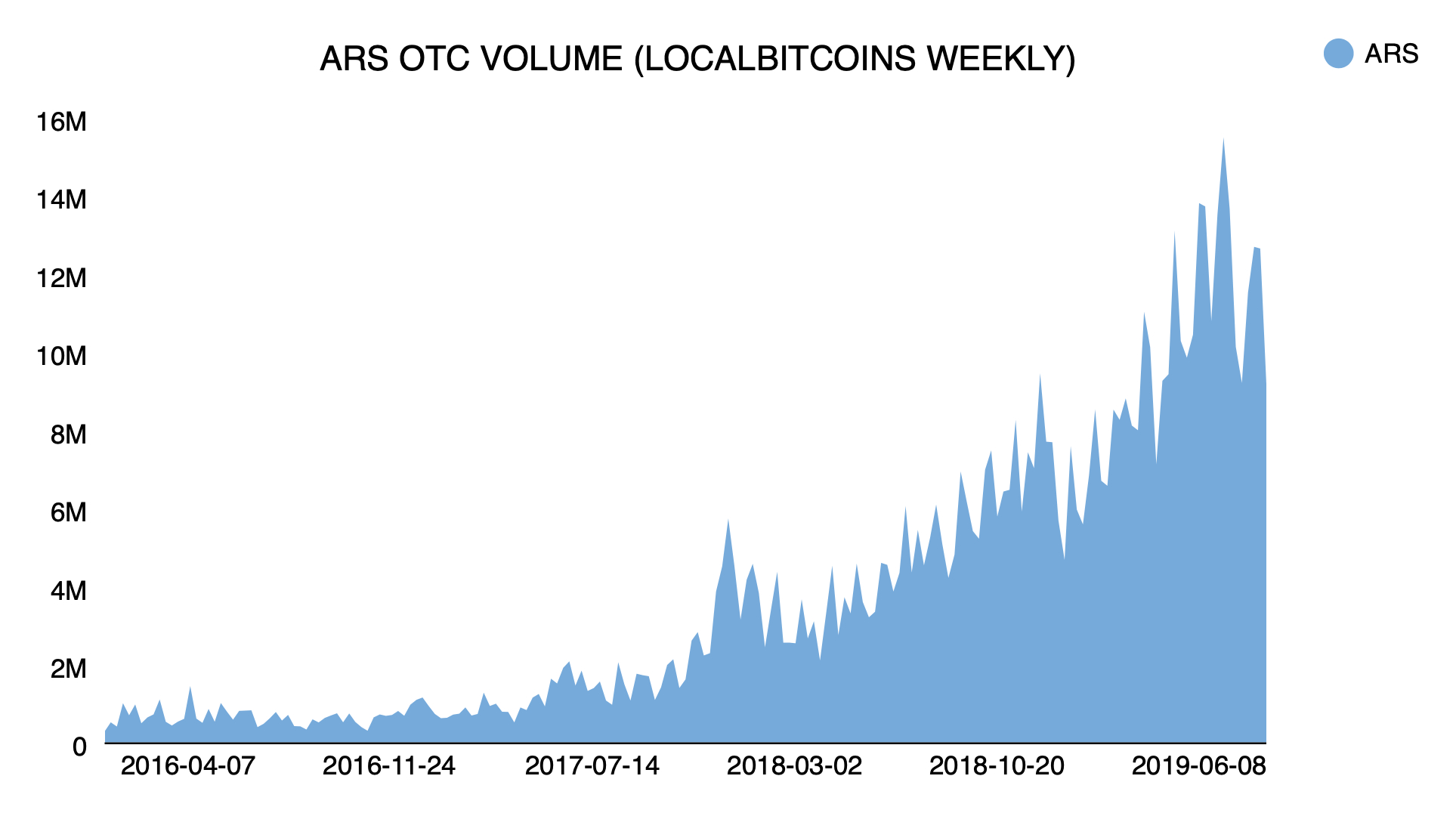 Argentina has a history of failed governmental & monetary politics, suffering great depressions during 1974–1990 and 1998–2002. Argentina is a prime example of growing bitcoin adoption in a low-trust environment. By LocalBitcoins data, the OTC volume has been steadily growing within the last years.

Argentine peso (ARS) collapsed 30,3% to record 65 per USD on August 12th, after market-friendly President Mauricio Macri’s worse-than-expected performance in the country’s primary election. As the stock market tanked globally during the same timeframe, there was also speculation about emerging markets meltdown. 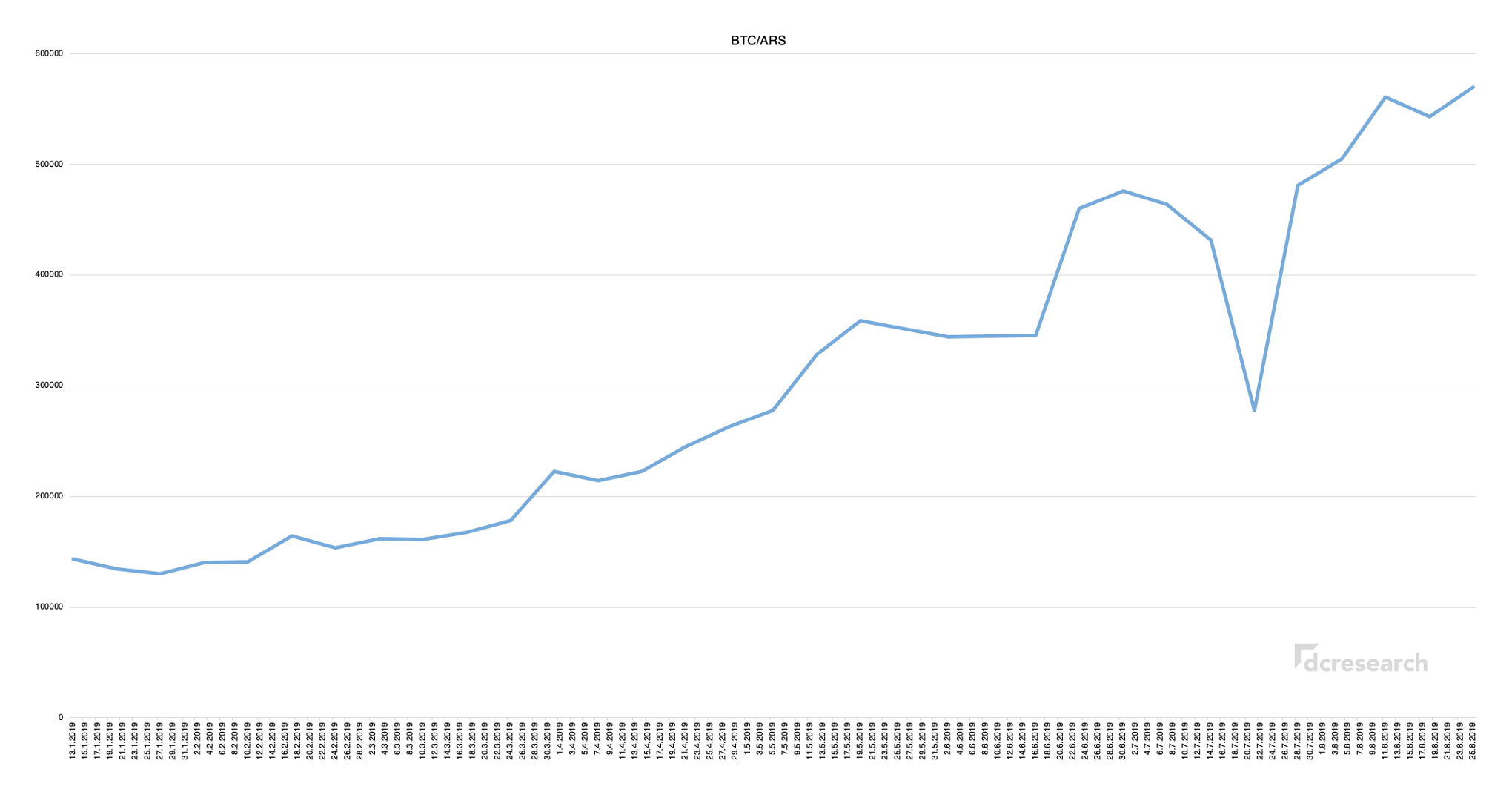 Amid the collapse of ARS, the spot price for bitcoin has been skyrocketing. With the current LBC OTC demand of ~10M pesos weekly, it’s absolutely clear that BTC and ARS are inversely correlated. In summary current sentiment clearly shows the relative weakness of EM national currencies vis-à-vis US dollar. 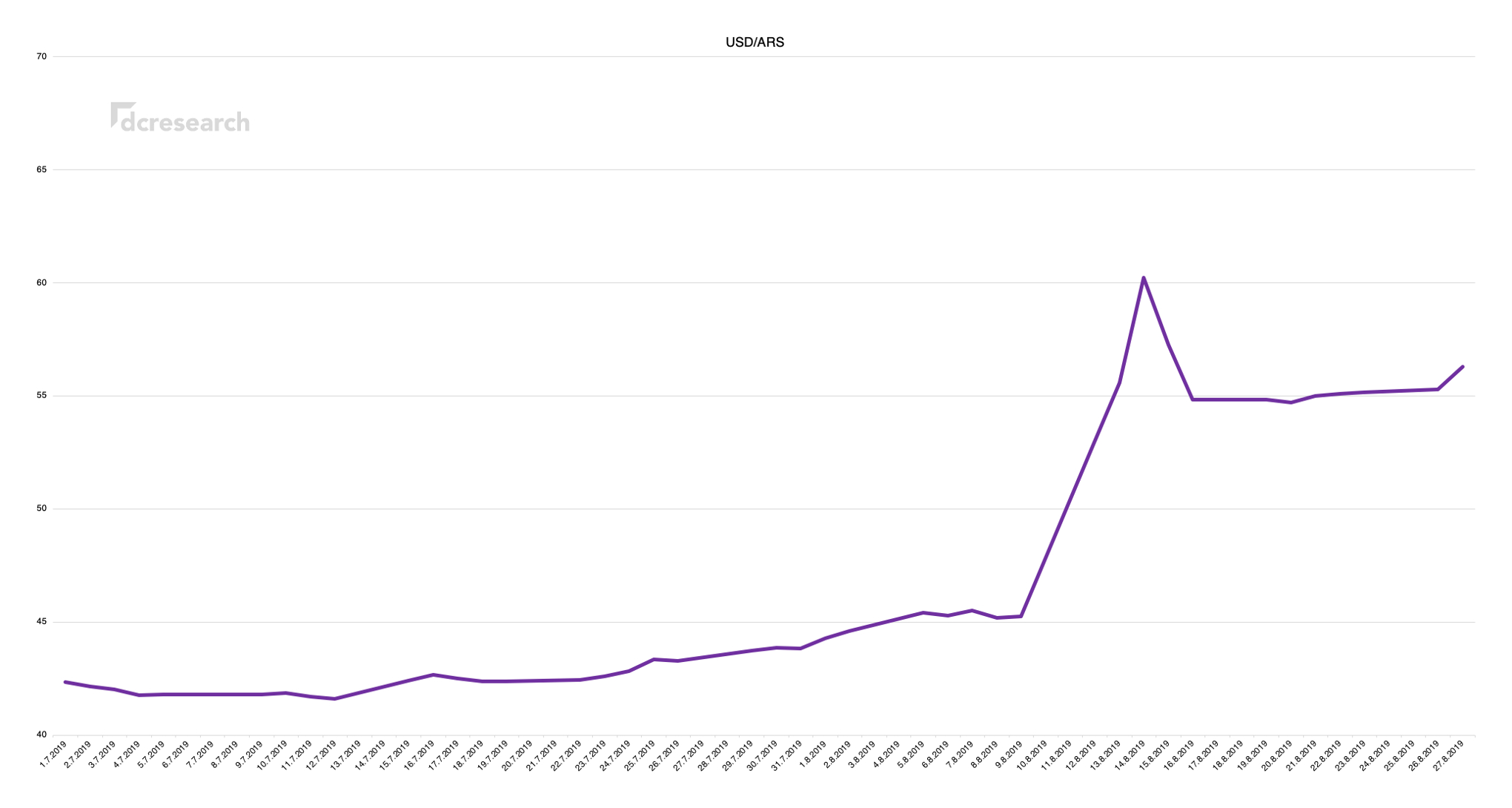 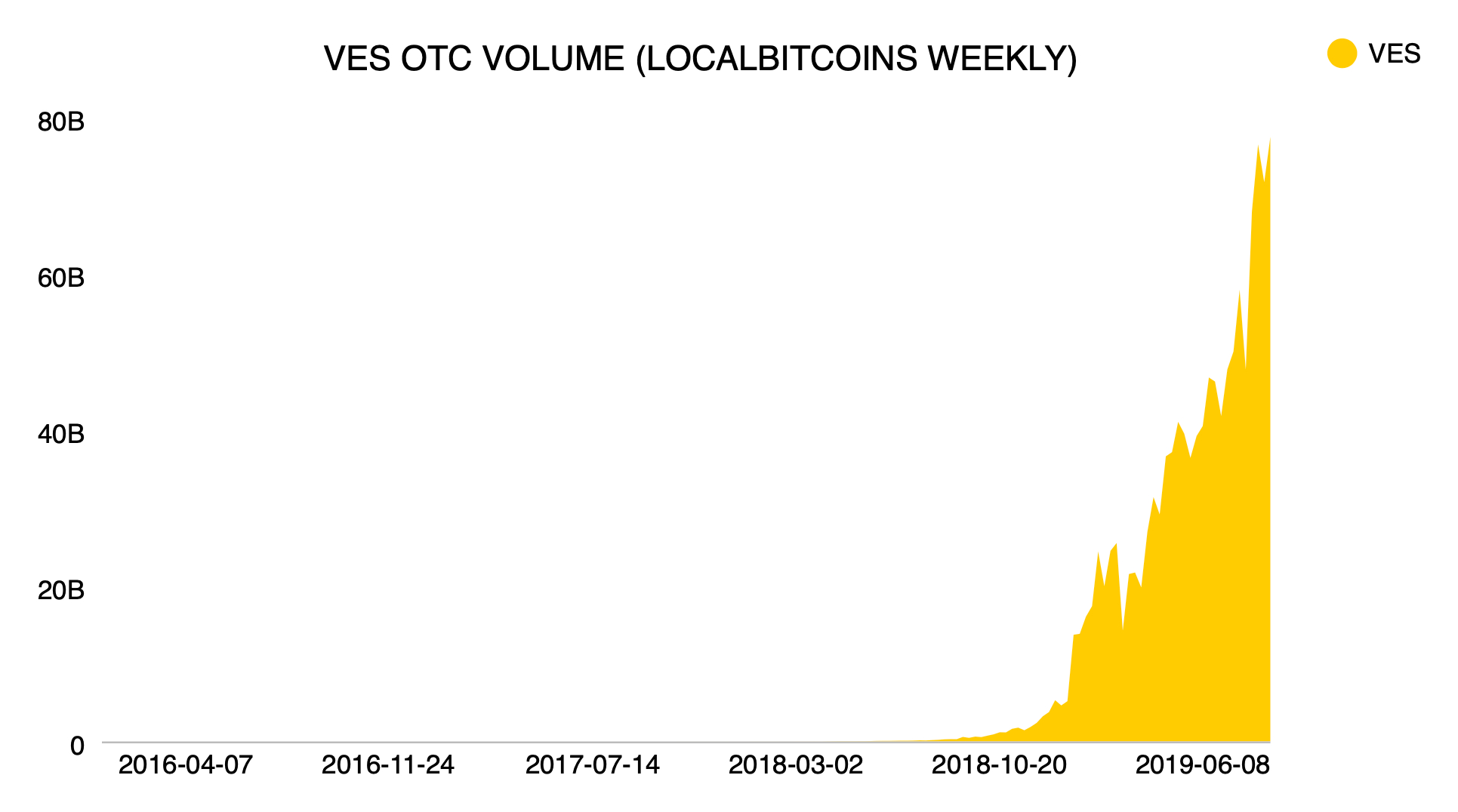 Desperate circumstances sometimes increase creativity, the Venezuelan government launched an oil-backed cryptocurrency called Petro (PTR) during December 2017. PTR is supposed to be backed by the country’s oil and mineral reserves, and is intended to supplement Venezuela’s plummeting bolívar fuerte currency, as a means of circumventing US sanctions and accessing international financing.

The author is an experienced bitcoin market analyst. He runs the bitcoin and blockchain consulting company dcresearch.