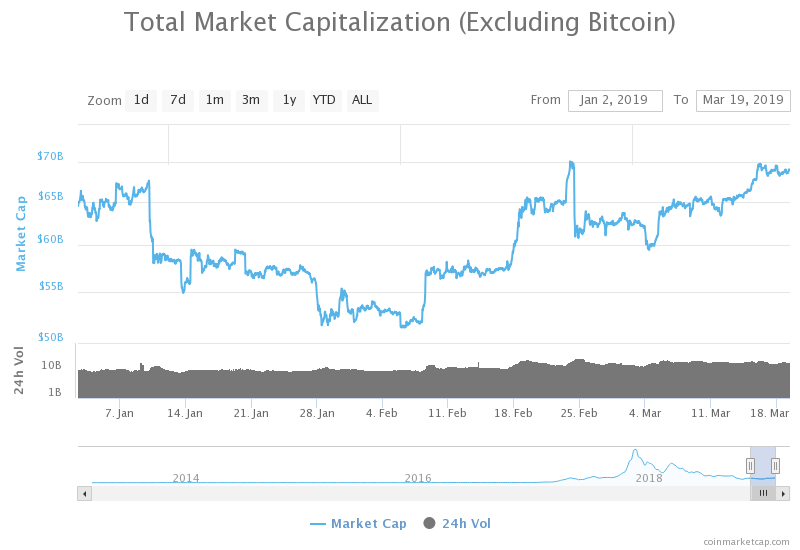 Through the existence of cryptocurrencies, the value of bitcoin has been superior compared to others. When altcoins raised faster than bitcoin during the 2017 rollercoaster, bitcoin’s position among cryptocurrencies was at its weakest and Ethereum showed potential to grow bigger by total market value. Nevertheless this scenario didn’t come true as Ethereum’s rise stalled and afterwards bitcoin made a strong rise. Ethereum’s share of the whole market was 31 percent, when at the same time bitcoin’s share was 38 percent. Regardless of this momentary equality, bitcoin has been pretty superior.

During 2019 altcoins have strengthened their position. Still at December 2018 bitcoin’s market share was approximately 55 percent, but has afterwards dropped near the 50 percent line. At the time of writing, cryptocurrencies prices and other relevant data collecting service coinmarketcap shows 50,3 percent market share for bitcoin.

The recovery of altcoins over bitcoin may tell its part about growing interest of investors towards whole cryptocurrency market. Volatility of altcoins is stronger and investing to them is notably riskier than investing to bitcoin. Nevertheless, higher risk-level means higher expectation of earnings.

Bitcoin’s position is also very strong at services that Prasos offers. At the moment Bittiraha offers only bitcoin exchange services, but Bittimaatti ATMs offer also litecoin and Coinmotion includes litecoin (LTC), ethereum(ETH) and Ripple (XRP) in addition to bitcoin. Among our customers bitcoin is still the most interesting financial asset. Nevertheless, we plan to add more cryptocurrencies to our services, as many altcoins have big potential like bitcoin and we want to offer the possibility to invest in them for our customers.