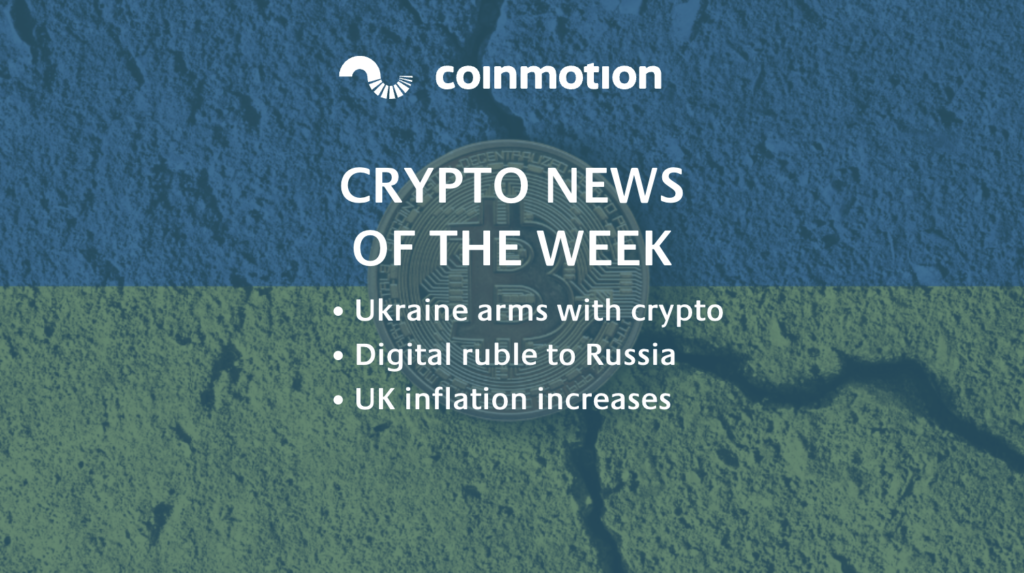 advertising / Ukraine arms with crypto, Scams on the decline, digital ruble to Russia

Ukraine arms with crypto, Scams on the decline, digital ruble to Russia

This is what the crypto world is talking about right now!

The Central Bank of Russia plans to implement the digital ruble in a few years. The topic was revealed in the central bank’s monetary policy publication for the years 2023-2025. During development, the currency will be gradually integrated into other financial institutions.

The release of a new currency enables the market operations to be maintained in accordance with the new conditions. The central bank has also mentioned that some restrictions can be placed on wallets. The central bank can, for example, limit the maximum amount of digital rubles contained in an individual wallet and the number of transactions.

According to the central bank, the restrictions imposed by the West have increased the importance of the digital ruble and accelerated the implementation schedule. Testing of real users and payments will begin in the spring of 2023. The roadmap for the digital ruble can be expected by the end of the year.

What is digital currency?

Currently, the central bank digital currencies are only available to banks. Digital currency is not necessarily intended to replace physical money but to enable a more convenient implementation alongside it.

Ukraine is arming itself with cryptocurrency donations

Since the beginning of 2022, Ukraine has been fighting against Russian aggression. Already since the end of February, Ukrainian ministers have been tweeting about crypto donations in hopes of covering the costs of the war. Due to the weakened infrastructure and the speed of cryptocurrencies, Ukraine has received significant help from them.

Ukraine has covered the costs of the war with cryptocurrency donations. The Ministry of Ukraine has published a comprehensive report on procurements made with donations of just under 60 million dollars. Crypto donations have been used to support mainly war expenses, such as protective equipment, drones, weapons, and medicine.

“We exchanged cryptocurrencies and sent them to our Ministry of Defense. They decided which purchases would be made with them. We are at war, and we can defend ourselves by any means”, says Digital Ministry’s Bornyakov in his statement.

Even though the use of the funds has been transparent, the ministry does not want to specify, due to the ongoing war, which instruments have been purchased with the funds. Ukraine will not publish more detailed information about the acquisitions until the end of the war.

Many actors have criticized weapon acquisitions made with cryptocurrency, such as Patreon. The company has removed a Ukrainian non-profit organization from its platform, as according to their rules, the funds cannot be used to purchase weapons or support military activities.

“We don’t list every single thing we buy, but this is still a start. We continue to buy night vision goggles and bulletproof vests. We have started spending more money to fight propaganda. This is new. We have also started spending money to establish a new English-speaking Ukrainian media, United24“, said Bornyakov in a recent interview.

By donating cryptocurrencies, users know that the funds will go to their destination in full. That’s a big advantage over traditional donations, as donations made through a centralized entity go largely into administrative costs. Sending donations across borders is also really easy and simple, compared to a standard bank transfer.

Crypto scams have decreased by 65% ​​since last year

Chainalysis has researched that the number of victims of crypto scams is significantly lower compared to last year. The total financial amount of scams in 2022 has been 1,6 billion dollars, which is 65% less compared to a year ago.

How can you fall victim to a crypto scam?

The most frequently seen scams in the news are hacks into blockchains, where users’ funds have been drained in the blink of an eye. The amounts stolen can be large if hackers gain access to the contents of all users’ wallets.

Other common crypto scams include connecting your wallet to a shady service, where you think you’re going to a regular page, but automatic smart contracts empty your wallet.

Some fraudsters also pose as company customer service agents in, for example, chat services. The user is asked for the wallet’s encryption keys, which scammers can use to empty the user’s account.

The crypto world is full of different crypto scams. You may have come across the following claim: “Send us 1 Ethereum and we’ll double it so you’ll get 2 Ethereum as a reward”. Many unsuspecting users fall for similar scams, which tarnishes the reputation of cryptocurrencies and slows down real global adoption.

Although the Texans claim to be the first in the league in the world of crypto, earlier this year the Dallas Cowboys signed a deal with Blockchain.com. However, the collaborations are a bit different, so the Texans’ claims are not made out of thin air.

“Digital currency has become the primary means of payment, and BitWallet’s collaboration with the Texans is leading the way in crypto payments in the NFL,” said BitWallet CEO John T. Perrone at the press conference.

How does sport contribute to the adaptation of cryptos?

The cryptocurrency market is still relatively small and teams can easily sell their match tickets with cryptocurrency. The users consist of people of all ages and different people, so bringing cryptos to their attention is an excellent thing in terms of mass adoption.

In recent years, many professional athletes have started to receive contract compensation in cryptocurrency. However, it is interesting to note that some have made really good contracts in the short term.

Sports also affect the general population, because a large group of people actively follow sports. When athletes and sports clubs adopt cryptocurrencies, it will probably have a positive effect on the behavior of people who follow sports. In other words, people follow the example of their role models.

Inflation in England continues to rise

Inflation in England has risen to a new 40-year high last month, rising above 10 percent for the first time since 1982. Inflation is causing difficulties for households to pay their bills and buy food.

The hard times are not ending, as the Bank of England has had to raise its interest rates on a monthly basis the most in 27 years. Although consumers seem to be in trouble, it doesn’t slow down the bank. Many indicators already show that England is in a recession.

Between April and June, wages increased by 4.7%, but taking inflation into account, the income level of employees decreased by 3%. This is the biggest drop in the 20-year recorded history.

Inflation is expected to rise even further by the end of the year. The prices of electricity bills have already risen by 54% and the price of gasoline by more than 95% in a year, which puts consumers in a difficult situation

What does inflation mean?

Inflation means a decrease in the value of money, i.e. a weakening of purchasing power. You can think of inflation in such a way that if you have 100 euros in your bank now and inflation is 7% per year, your money will be worth 93 euros a year from now.

Inflation is usually a long-lasting, but controlled phenomenon. However, recent world events have triggered a chain reaction that has caused inflation to skyrocket. Since the beginning of the corona pandemic, new dollars have been poured into the market and it has reduced the value of money. An estimated 80 percent of all dollars have been created between 2020 and 2022.

Cryptocurrencies are often thought of as a hedge against inflation. New crypto coins cannot be created out of thin air after their launch and measures against similar types of disasters can be programmed into them. The central bank has taken various measures to solve inflation, such as raising interest rates. On the other hand, as long as more fiat currency can be created out of nowhere, there will be demand for cryptocurrencies.

Spending on crypto advertising is on the decline

Spending on television advertising for cryptos has decreased, but crypto firms still see the money spent on advertising as important in a bear market due to brand recognition.

On Wednesday, Bloomberg published a statement about the money used to advertise crypto firms, which tells about a wild downturn. During July, only 36 thousand dollars were spent on marketing in the United States, which is 99.9 % less than in February, when the corresponding figure was 84,5 million dollars.

The big advertising expenses in February were mostly from the time of the NFL’s Super Bowl. Coinbase, Crypto.com, and FTX US wanted to raise their awareness and invested huge amounts in advertisements.

Even though television advertising has decreased, many crypto companies continue to heavily market online. During a downturn, brand recognition is important, and companies don’t want to be forgotten in the minds of customers.

The growth of cryptocurrencies in sports circles is not slowing down, despite the decrease in TV advertising, as more and more professional athletes take their salaries in cryptocurrencies. In addition, many crypto exchanges continue to advertise on sports stadium advertising spots and on athletes’ clothing.

Why has the advertising decreased?

The value of the crypto market has fallen drastically since the end of last year. The total value has dropped to one-third of its peak, so companies have trouble with their budgets.

In addition, global inflation has played a role in it. Inflation reduces the amount of money available to consumers, so many companies think advertising is pointless because people simply don’t have the extra money to invest.

It is, of course, typical that less advertising is done in the summer than at other times. People are often on vacation in the summer, and ordinary consumers are more interested in funds used for vacations than for investments.

The FED is making things difficult for crypto

The US Federal Reserve has revealed new guidelines for banks working with cryptocurrencies. Banks are no longer allowed, for example, to proceed with issues related to cryptos without approval from the central bank’s inspectors.

In its announcement published on Tuesday, the central bank described the various steps that the bank must accept from the inspectors when taking actions related to cryptocurrencies.

The measures will apply to all banks that are under the authority of the US Federal Reserve, regardless of the number of assets. The central bank’s idea is to get information about all activities related to cryptocurrencies, as well as the development of projects that are already underway.

Banks should perform sufficiently good risk analyzes and take care of the state and state legislation when operating.

Central banks act as the rulers of the money flow in their region. The central bank’s operations are financed with the interest income received from the banks’ operations. Cryptocurrencies are not a viable option for central banks if people can transfer currency at a fraction of the cost compared to the traditional banking system.

In practice, with the help of cryptocurrency, ordinary consumers can be their own banks. A person can receive interest income, take out a loan or make cross-border transactions without the bank getting its share.