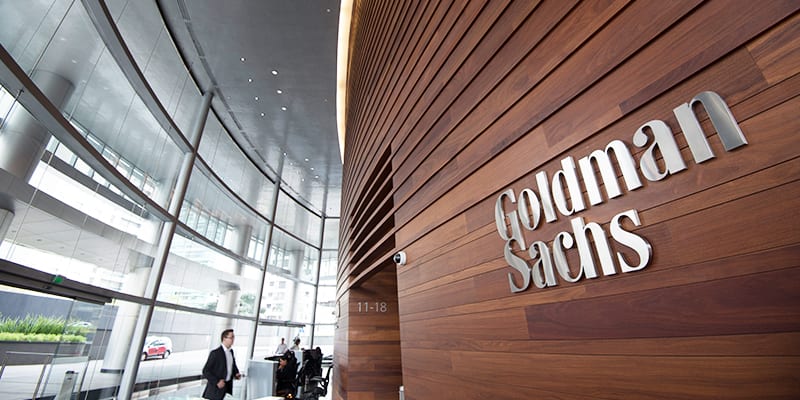 Last week we reported how financial institutions are more and more interested in cryptocurrency trading. Soon we heard that none other than Goldman Sachs, one of the biggest banks in Wall Street, is going to start trading its own Bitcoin futures because of the increasing demands of its clientele.

The price of Bitcoin seems to have stabilized to a little bit over 9,000 dollars during the start of the week and it seems that the bottom has been reached.

Of course it’s hard to predict the future, but at least signs are promising. Institutional money is going to flow into Bitcoin and the technological aspects of Bitcoin, like mining and payments, are developing well.

The future shines bright on this one.

Goldman Sachs is About to Trade Its Own Bitcoin Futures

Goldman Sachs is about to become the first Wall Street bank that commences bitcoin trading operations. The bank is moving ahead to offer their own versions of Bitcoin futures to their clients. According to Goldman Sachs there has been a demand from clients for Bitcoin-based products.

“It resonates with us when a client says, ‘I want to hold Bitcoin or Bitcoin futures because I think it is an alternate store of value,'” said Rana Yared, the Goldman executive in charge of overseeing the creation of the trading operation.

Goldman Sachs is not the only major financial institution that is interested in bitcoin. According to a study released last week about one fifth of major banking and financing institutions are going to commence some sort of bitcoin trading in the future. Most of these have stated that they will start their own projects as soon as withing 6 months.

Bitcoin network’s hashrate is climbing even though the price of bitcoin hasn’t been as high as last year. This might mean lower revenues for miners, but it also means that more miners are moving from Bitcoin Cash or other alternative cryptocurrencies back to Bitcoin.

Another reason for growing hashrate is the developement of more and more powerful chips like ASICs and graphics processing units. New generations of these chips can do more calculations for the same amount of consumed energy.


Many Official Sites Infected With Cryptojacking

Hundreds of websites have been infected with a malicious cryptojacking software that allows hackers to harness the computing power of website users to mine cryptocurrencies. The infected sites were all running the Drupal content management system, and many of them were official and public sites.

These affected sites include the City of Marion, the University of Aleppo, the Government of Chihuahua and many others. A full list of affected websites has been released as a spreadsheet.

When an user visits a website affected with cryptojacking code, their computers start to calculate cryptographic functions. An average user won’t probably even notice the slight slowing down of computer, but cryptojacking could potentially raise electric bills and cause wear to computer’s hardware.

For website operators cryptojacking can cause larger problems. Many antivirus software block sites infected with cryptojacking, and the rise of new cryptojacking methods means that operators have to keep updating their systems more regularly.

CoinMarketCap, the largest single database of cryptocurrency price charts, has removed Bitcoin.com from its Bitcoin page. Reason for removal is that Bitcoin.com doesn’t anymore advocate Bitcoin information, but it has more and more centered on Bitcoin Cash; the hard fork copy of the original Bitcoin.

This confusion has led many to buy Bitcoin Cash by accident thru Bitcoin.com or its advertisements. An ever-growing group of Bitcoin users are raising money and preparing a joint-case against Bitcoin.com and its owner Roger Ver for practicing dishonest marketing methods.

Even though Bitcoin.com was once one of the best places to get information on Bitcoin, it can no longer be recommended for anyone, at least not before the site stops it false advertisements and deliberately dishonest practices.

CEO of Bitcoin payment firm Living Room of Satoshi, Daniel Alexiuc, has posted a video on Twitter, where he demonstrates a real-life payment using Bitcoin and Lightning Networks. The video shows how the payment is made and how it is instantly received.

Lightning Networks are a second-layer scaling solution for Bitcoin. The primary idea of Lightning Network is to transfer Bitcoin transactions between trusted parties outside of Bitcoin’s blockchain. The blockchain is then only used to verify payments when sent outside of a trusted circle.

Here's what it's like to buy an actual real coffee using the #LightningNetwork. Lightning is now live as a payment option at The Botanist Kitchen and Bar #brisbaneairport Spoiler: it works 🙂 Thanks @TravelbyBit and @roomofsatoshi pic.twitter.com/yT0Zipc0e0

Bytecoin has been on rise. Bytecoin rose over 110 percent between Monday and Tuesday. One bytecoin now exchanges for about 0,017 dollars, which is far higher than bytecoin has been during entire year. This is the all time high for bytecoin.

Bytecoin has been seen as a double-edged sword. On the other hand Bytecoin was the first anonymous cryptocurrency, preceding currencies like ZCash or Dash. Even the more known Monero was originally a hard fork of Bytecoin. The privacy technology behind Bytecoin is solid.

On the other hand Bytecoin has been hit with scam allegations. Until recently the team behind Bytecoin stayed anonymous, which lead to some people question their true motives. Vast amounts of bytecoin were premined and held by few people, which could give them the opportunity to crash the markets, if they so well.

Bytecoin is close to reaching its maximum amount of 184 billion bytecoins. Over 99% of all bytecoins that will ever be have been mined already. The believers of bytecoin say that when the cap is reached, the price of bytecoin will blow thru the roof.

At least the case of Bytecoin will give an interesting look on what will happen when a somewhat used cryptocurrency reaches its limit.

A Finnish author who has been writing about cryptocurrencies for over eight years.
0 Comments
Inline Feedbacks
View all comments
PrevPreviousBlockchain & Bitcoin Conference Finland On May 25th
NextLitecoin is a Faster Alternative to BitcoinNext
Sign up