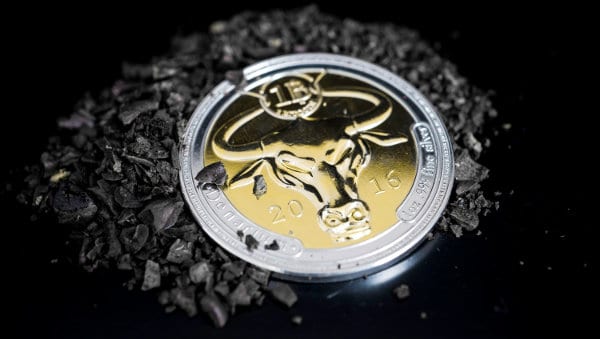 Last week has once again been an interesting week for Bitcoin, the master of all digital currencies and financial technologies. In October 18th the price of bitcoin declined sharply, as its price fell almost 10% in one day. This spurred many nay-sayers to draw comparisons to the famous Black Monday that shook up the financial world almost exactly 30 years ago, when the largest stock markets crashed almost 25% in October 19 of 1987.

But the anniversary of Black Monday didn’t spell doom for the cryptocurrency. On the contrary what many thought was the beginning of a bursting bubble was a so-called bear trap, which shed away the weaker investing hands. When the anniversary of Black Monday came, bitcoin price started a fast road to recovery. The price recovered from the correction in one day, after which it resumed its path towards higher prices.

The magical threshold and all-time high of over 6 000 dollars was reached in October 20th, just a day after the 30th anniversary of the stock market crash of 1987. After reaching the new limits, bitcoin began to push even more aggressively forward, climbing as high as over 6 100 dollars.

Even though the growth of bitcoin during this year has surprised all but the most optimistic investors, it seems that there still might be some room for short-term growth. According to a poll conducted by CNBC for investors, almost half of the investors believe that bitcoin will soon see prices of over 10 000 dollars. 16 percent of investors believe that a price range of 6 000 to 8 000 dollars is more realistic, with only a third of investors saying that the price will crumble.

According to CoinDesk, the data from Google Trends shows massive growth in interest towards bitcoin and cryptocurrencies, as the price is gaining momentum. As Google Trends has previously offered a reasonable glimpse of the future, the speculators believe that as more and more investors get attracted to the promises of Bitcoin and cryptocurrencies, the price of bitcoin might soon see some more growth.

Nonetheless; even if the recent surge in price is a bubble, Bitcoin will probably come out as a clear winner of this year. Even if Bitcoin would shed half of its current market value, it would still hold annual price increase of about 1 000%.

The Massachusetts Institute of Technology has become the first university in the world to offer digital certificates based on blockchain technology. MIT began its pilot project in middle of October, and already over 100 students have received their graduate degrees and diplomas in tamper-proof blockchain format.

The pilot project is handled in cooperation with MIT and a software firm Learning Machine, and it uses a special application that enables the graduates to share and verify their certificates themselves without any action from MIT. According to associate dean Mary Callahan, the pilot project aims to provide more power for the students to handle their own credentials.

“From the beginning, one of our primary motivations has been to empower students to be the curators of their own credentials. This pilot makes it possible for them to have ownership of their records and be able to share them in a secure way, with whomever they choose” Callahan explained.

Blockchain is ideally suited for handling official records like degrees. The immutable blockchain makes it impossible to forge, misplace or destroy the documents. As the blockchain is open, it’s possible for anyone to verify the documents without a need for a third party. Blockchain also removes the previously necessary link between the degree and its issuer.

“MIT is among the first universities to have issued official records in a format that can exist even if the institution goes away. People can own and use their official records, which is a fundamental shift” the CEO of Learning Machine, Chris Jagers, stated.

Russia to Issue an Official CryptoRuble

The President of Russia, Vladimir Putin, has officially stated that the Federation will issue its own cryptocoin called CryptoRuble. The statement was given behind closed doors and it was broken through the Minister of Communications and Mass Media, Nikolai Nikiforov, to a local news media AIF.ru.

According to minister Nikiforov the new cryptocurrency will not be mineable by common users. Its issuance and maintenance will be solely responsibility of the authorities. The new cryptocurrency can be exchanged for traditional Rubles at any time; though if the holder is unable to explain where the CryptoRubles comes from, a special tax of 13 percent will be levied.

Minister Nikiforov is one of the youngest members in president Putin’s cabinet, and he has also the reputation of being one of the tech-savviest politicians in Russia. According to Nikiforov the reason for issuing a state-run cryptocurrency is simple: they have to do it or someone else does it before them.

“I confidently declare that we run CryptoRuble for one simple reason: if we do not, then after 2 months our neighbors in the EurAsEC will” Nikiforov said to AIF.ru.

If Russia’s operation goes according to plans, Russia will become the second government to issue its own cryptocurrency, after the city of Dubai launched its own crypto-project.

A Finnish author who has been writing about cryptocurrencies for over eight years.
0 Comments
Inline Feedbacks
View all comments
PrevPreviousWeekly News 41 / 2017: Bitcoin breaks all-time high of over 5 500$
NextBitcoin Gold hard fork announcementNext
Sign up