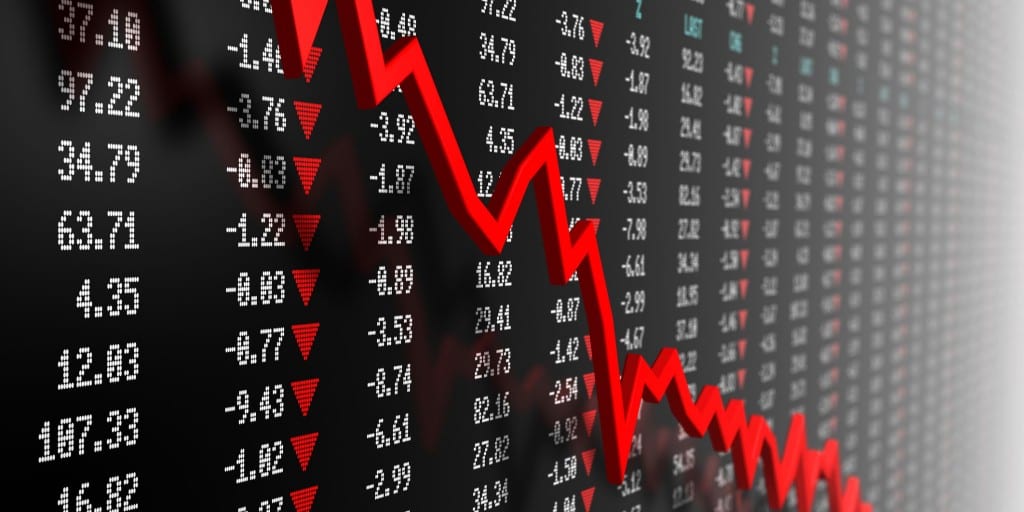 Bitcoin / Weekly News 6 / 2018 : Both Traditional Markets and Crypto Markets Down

Weekly News 6 / 2018 : Both Traditional Markets and Crypto Markets Down

Last week has been a dark week for markets: not just crypto, but for the mainstream as well. Last Monday, February 5th The Dow Jones Industrial Average dropped more than 1 100 points, which was its largest drop since the debt crisis of 2011. Another traditional market index, the S&P 500 that lists 500 of the biggest american companies, went down 4,1 percent.

On Thursday Dow Jones fell again for over 1 000 points, making it the second time in the week for traditional market to fall as much. S&P 500 Index also reported drops, when it fell down by 3,75 percent, reaching its lowest since last November.

Bitcoin and other cryptocurrencies weren’t spared from the market woes. On Monday, for the first time since 2017, bitcoin fell under 7 000 dollars. All the other important cryptocurrencies lost millions of their market cap as well. In general cryptocurrency markets were on the red, though since then they have somewhat recovered.

The second slump of Thursday didn’t affect cryptocurrency markets as much. Though the traditional markets crumbled, bitcoin was trading strongly above 8 000 dollars. Other cryptocurrencies were also recovering strongly. This hints that the reasons behind cryptocurrencies market drop were at least somewhat different than reasons for the fall of mainstream markets.

According to CNBC “no particular piece of news” caused the traditional markets to fall, but the fall was more caused on unfounded consumer fears. On the other hand, for Bitcoin and other cryptocurrencies this fall could be attributed to China, which expanded its cryptocurrency ban to include all foreign exchanges and ICO websites. China extended its Great Firewall to block all cryptocurrency sites operating outside the country, essentially cutting most of the Chinese cryptocurrency users from the rest of the community.

Even though the first two months of 2018 have been somewhat rough for Bitcoin, those who have had years of experience in the field believe that this is only natural and that cryptocurrencies are still poised for bright future. This year seems to have many things to offer for Bitcoin from technological advantages to economic maturation.

“We believe after February the market will likely go on a bull run comparative if not greater than last year potentially reaching the trillion-dollar mark before a proper crypto winter sets in where the market becomes more focused on proper market fundamentals” the CEO of Europe’s first blockchain-based incubator, told CNBC.

According to Thomas Glucksmann, the head of APAC business at Gatecoin, new regulation that increases mainstream trust, the introduction of institutional capital and technological upgrades like Lightning Networks as the driving reasons behind the growing price.

“There is no reason why we couldn’t see bitcoin pushing $50,000 by December” Glucksmann told in an email.

Bitcoin billionaires and veteran investors, the Winklevoss twins, commented for CNBC that Bitcoin has “potential appreciation of thirty to forty times its current value”. This could, of course, take time. According to Winklevoss brothers bitcoin could reach these highs in ten to twenty years.

The security expert and antivirus millionaire John McAfee stood firmly on his bullish beliefs as well. According to McAfee there is no reason why bitcoin’s price wouldn’t go up this year. McAfee also showed bitcoin price statistics that indicate that bitcoin goes through a period of correction every year before it resumes a growing momentum.

Though many times crashes hurt, they also aren’t entirely without their benefits. According to Cointelegraph’s Darryn Pollock the price correction of cryptocurrencies could very well be a boon for Bitcoin, since it could have shaken off at least some of the potentially harmful investors, like “weak hands” and those who buy bitcoin for debt. This kind of investing could very well lead bitcoin to a bubble territory, which could lead to many people suffering and losing their money.

By shedding off the so-called weak hands, investors whose belief in bitcoin isn’t that solid, the long-term growth of bitcoin becomes more probable. Thus crashes are sometimes beneficial, even necessary, for a stable, long-term growth of technology.

Reports Indicate that Blockchain Will Strive

The feelings of bullish investors aren’t entirely baseless.  According to a global market intelligence and data analysis firm International Data Corporation spending on blockchain-based tech has been steadily increasing. In year 2017 around 945 million dollars was spent in blockchain. IDC expects this amount to reach 2.1 billion dollars during 2018. Within five years spending could increase as much as over 81%, reaching a total spending of 9.2 billion in 2021.

“Many technology vendors and service providers are collaborating and working with consortiums such as the Enterprise Ethereum Alliance and the Hyperledger Projects to develop innovative solutions that improve processes such as post-trade processing, tracking and tracing shipments in the supply chain, and transaction records for auditing and compliance. Also, multiple regulators and central banks have made positive comments about blockchain and DLT and this will help to accelerate demand in regulated industries such as financial services and healthcare” Bill Fearnley, research director in Worldwide Blockchain Strategies told.

Blockchain is striving and as the foremost use-case of blockchain-based technologies, Bitcoin has a tendency to profit from this as well. Most of the easiest advantages of blockchain to implement have to do with economics and transactions. As bitcoin is by far the largest and most trusted cryptocurrency, it has the potential to become the centerpiece of these applications.

“There are a multitude of potential new use cases for blockchain, as transactions and records are the lifeblood of just about every organization. However, we are seeing initial blockchain spending to transform existing highly manual and inefficient processes such as cross-border payments, provenance and post transaction settlements. These are areas of existing pain for many firms, and thus blockchain presents an attractive value proposition,” said Jessica Goepfert a program director of Customer Insights and Analysis at IDC.

This increase of interest in blockchain can be seen in other fields as well. As the value of cryptocurrencies increases and new altcoins flood the markets, mining has seen a kind of an Renaissance. Mining is no longer concentrated solely on the hands of large mining farms, but consumers can do it profitably as well. This in turn has led to graphics cards manufacturers reporting unexpected returns as more and more people are buying their products, not for gaming, but for mining.

The graphics processor company Nvidia reported that the company gained about 2.91 billion dollars in revenue in the last quarter of 2017. This is over 34% more than what the company reported last year during the same period.

An analyst of Nvidia told Coindesk that the company didn’t expect the increased profits from cryptomining. The company didn’t have any plans for it, nor did they have modified any part of their business strategy. Nonetheless cryptominers were buying their products en masse.

“While the contribution of cryptocurrency mining to our business is hard to quantify, it is likely to have been higher than in previous years. However, we remain committed to our gaming demands as cryptocurrency trends are likely to remain volatile” Nvidia’s executive vice president and chief financial officer Colette Kress commented.

Smart contracts are a digitized form of contract which is entirely dependent on code. This eliminates any need for a middle-man or even the need to trust the other participants of the contract. Potentially smart contracts could reshape fields like law and trading.

Even though they have a vast potential, smart contracts haven’t seen much of use. The most (in)famous case of a smart contract was The DAO – a decentralized venture fund build on top of Ethereum’s blockchain. By utilizing a weakness in how the smart contracts behind The DAO were created, a hacker managed to steal millions of dollars in cryptocurrencies.Up to date there hasn’t been many more successful attempts at smart contracts.

“There has been a lot of hype about smart contracts, but real and meaningful usage of them hasn’t caught up with that hype yet. Taproot and Graftroot improve the backend technology for these advanced applications and by doing so will contribute to making them more accessible to people” Maxwell said.

E-Coin, a Pump-and-Dump Scheme from the Past

As the cryptomarkets have seen more volatility than usual in the last few weeks, many have seized the opportunity for quick bucks regardless of whether it is morally wrong. Even though most cryptocurrencies have had a slow week, one coin has rocketed for over 1 000 percents in value: E-Coin.

On the surface E-Coin looks like a typical cryptocoin without any real differentiating features. It was first closed down (as much as you can close down a computer program) in 2017 by Switzerland’s financial overseers. According to Swiss authorities the E-Coin bared no resemblance to actual blockchain-based cryptocurrencies, but was instead based on centralized servers. The issuers of E-Coin claimed their token was backed by tangible assets, but the investigators found out that most E-Coins were issued without any backing whatsoever. E-Coin was a typical pump-and-dump scheme.

A pump-and-dump scheme is basically a con where someone creates a cryptocurrency or something that looks like a cryptocurrency and then creates hype around the product by false advertising, media and buying their own products to bump its value up. When the value has risen enough, the developers or other actors engaged in the scheme dump their coins in the markets, taking what they can and then disappearing from the community.

This sudden rise of long dead scamcoin is another pump-and-dump scheme, which have become more common as ICOs and big investor money floods the market. Currently there is more money invested in cryptocurrencies than there is actual knowledge of what cryptocurrencies are and what they do. For scammers this is an ideal opportunity, as they can create fake coins and conduct pump-and-dump schemes and there is usually at least someone who falls for their tricks in the wide world of Internet.

Even though E-Coin is listed in CoinMarketCap, it is in no way a legit cryptocurrency. On paper it has seen a quick, rocket-like growth, but in actuality this is just a hustle to get people’s hard-earned money.

When investing in cryptocurrencies, especially in less known altcoins, it is imperative that the investors do their research. By googling the coin, reading forum posts about the coin and doing even a little homework on how people swindle with coins can save lots of money and heartache.

0
Reply
PrevPreviousSegWit Paves the Way for FinTech Revolution
NextWeekly News 7 / 2018 : Bitcoin on a Path of RecoveryNext
Sign up