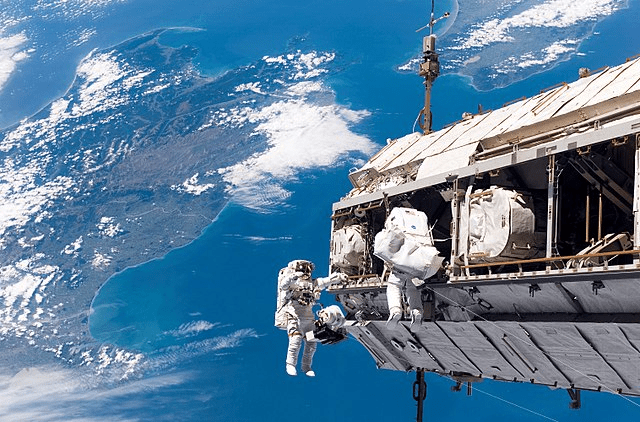 Happy December, dear readers! The year and decade is nearing its end but Bitcoin’s story is only in the beginning. Now the number one cryptocurrency has expanded its reach even beyond our planet by visiting space through a physical bitcoin wallet. Bitcoin in space is no longer just a metaphor for its price rise but also a literal reality.

As for bitcoin’s ever-shifting price, it has recently been zigzagging around $7500 dollars with minor spikes up and down. A closer review on the matter is provided by our technical analyst in his latest blog.

In less fortunate news we have a court ruling allowing a Nordic bank to limit the Bitcoin use of its employees even on their spare time. While enforcing this ban may be impossible, the ruling sets a bad precedent by invading employee privacy outside their work environment. The good news here is that banks would not restrict Bitcoin unless they saw it as a serious threat – and that means Bitcoin works.

In another interesting case we have an Ethereum developer arrested in the United States after holding a blockchain lecture in North Korea. Furthermore an update on the digital euro and Ethereum’s successful hard fork.

Bitcoin wallet technology  has been sent to the International Space Station ISS for the first time in history. Blockchain startup company SpaceChain sent its physical hardware Bitcoin wallet to the ISS along a service mission, reports a press release from 6th December.

The European Space Agency ESA has funded SpaceChain’s project with a €60 000 euro grant. SpaceChain intends to test new multisig technology in which one of three necessary signatures is sent through a satellite-based blockchain node.

“This will be specifically for Bitcoin, however we are planning for this to be extended to other blockchains in the near future as part of our expected roadmap that will see several new launches over the next 18 months. The technology tested on the ISS will be applicable to crypto exchanges, wallets and custodial services that benefit from additional security to their transaction validation process, and we are already working with some of these stakeholders to implement this type of use-case,”, states SpaceChain.

Nordic Bank allowed to restrict bitcoin use of employees

Nordic bank Nordea has won a court case in Denmark related to its right to restrict the bitcoin use of its employees. In early 2018 Nordea decided to ban all bitcoin-related activity from their workers, stating that Bitcoin was a competitor to banks and a risk investment.

The case stirred strong criticism in Denmark, as it was regarded to restrict individual rights and economic freedom. Eventually a group of workers’ unions took the case to court. The court now ruled that Nordea did not violate employee rights but had the right to ban bitcoin use.

The case may yet see a retrial and the ruling has no effect outside Denmark. However, Nordea also restricts bitcoin use in other countries, including Finland.  If a similar trial would arise in Finland or elsewhere, local courts could use Denmark’s example as a precedent.

A whole other matter is how Nordea could possibly implement their bitcoin ban. In order to truly enforce it the bank would have to use heavy blockchain analysis tools and other digital profiling methods. This in turn could create more serious judicial questions about banks abusing their authority.

All Android interfaces are vulnerable to hacks

Norwegian cyber security company Promon has found a dangerous vulnerability in all Android user interfaces, which gives hostile hackers the chance to steal confidential information from the applications. The company revealed this vulnerability dubbed StrandHogg on 2nd December.

For cryptocurrency users this means that Android-based cryptocurrency wallets may be also be vulnerable to hacks. In the worst case it may allow hackers to steal cryptocurrencies stored on smartphone wallets.

“We have tangible proof that attackers are exploiting StrandHogg in order to steal confidential information. The potential impact of this could be unprecedented in terms of scale and the amount of damage caused because most apps are vulnerable by default and all Android versions are affected,” Promon reports.

Promon revealed another weakness to Google last summer. Google has thereafter removed all vulnerable apps from their store. However, according to Promon the weaknesses in Android interfaces remain.

A digital version of the euro currency may see daylight already next year. François Villeroy de Galhau, governor of the central bank of France, told financial publication Les Echos the digital euro will commence testing during the first quarter of 2020.

In the pilot stage the digital euro will mainly concern banks and other financial sector institutes. Private consumers will not yet get to partake in testing the project.

According to Villeroy, the digital euro is meant to improve the central bank’s efficiency in the evolving financial world and exploit modern solutions. The digital euro could also give France a better position against Facebook’s possibly upcoming Libra cryptocurrency, deemed a threat by many other EU countries.

”I see the interest in rapidly advancing the issuance of at least one central bank digital currency,” Vileroy stated.

Ethereum, the world’s second most popular blockchain application, has succeeded in its hard fork update. Dubbed Istanbul, the update improves Ethereum’s resistance against DoS attacks and also lowers the cost of transactions in the Ethereum network.

Hard fork refers to an update changing code so significantly that later versions are no longer compatible with earlier ones. In this sense it differs from so called soft work updates, in which updates are so small they don’t directly make different versions incompatible.

Istanbul marks the third important update of Ethereum this year. In the future Ethereum is set to see even more radical changes, as the blockchain may move from the current proof-of-work verification to proof-of-stake verification around the year 2021.

Authorities in the United States have arrested Ethereum developer Virgil Griffith after he visited North Korea to speak about blockchain technology. The authorities claim Griffith’s lecture broke sanctions against North Korea, since it can be seen as handing over technology to a hostile state.

According to Griffith’s defence there was nothing handed over, since all the information was already publicly available. On the other hand North Korea is known to have sponsored hacks against cryptocurrency exchanges as well as private citizens around the world.

If Griffith is found guilty, he may face years of jail time. Any ensuing sentence could also discourage future blockchain and cryptocurrency activists from holding similar lectures.

Cryptocurrency enthusiast who has several years of experience about using cryptocurrencies and writing about them.
PrevPreviousThe bear is strong – Bitcoin market analysis 2.12.2019
NextInternational Customer service specialistNext
Sign up