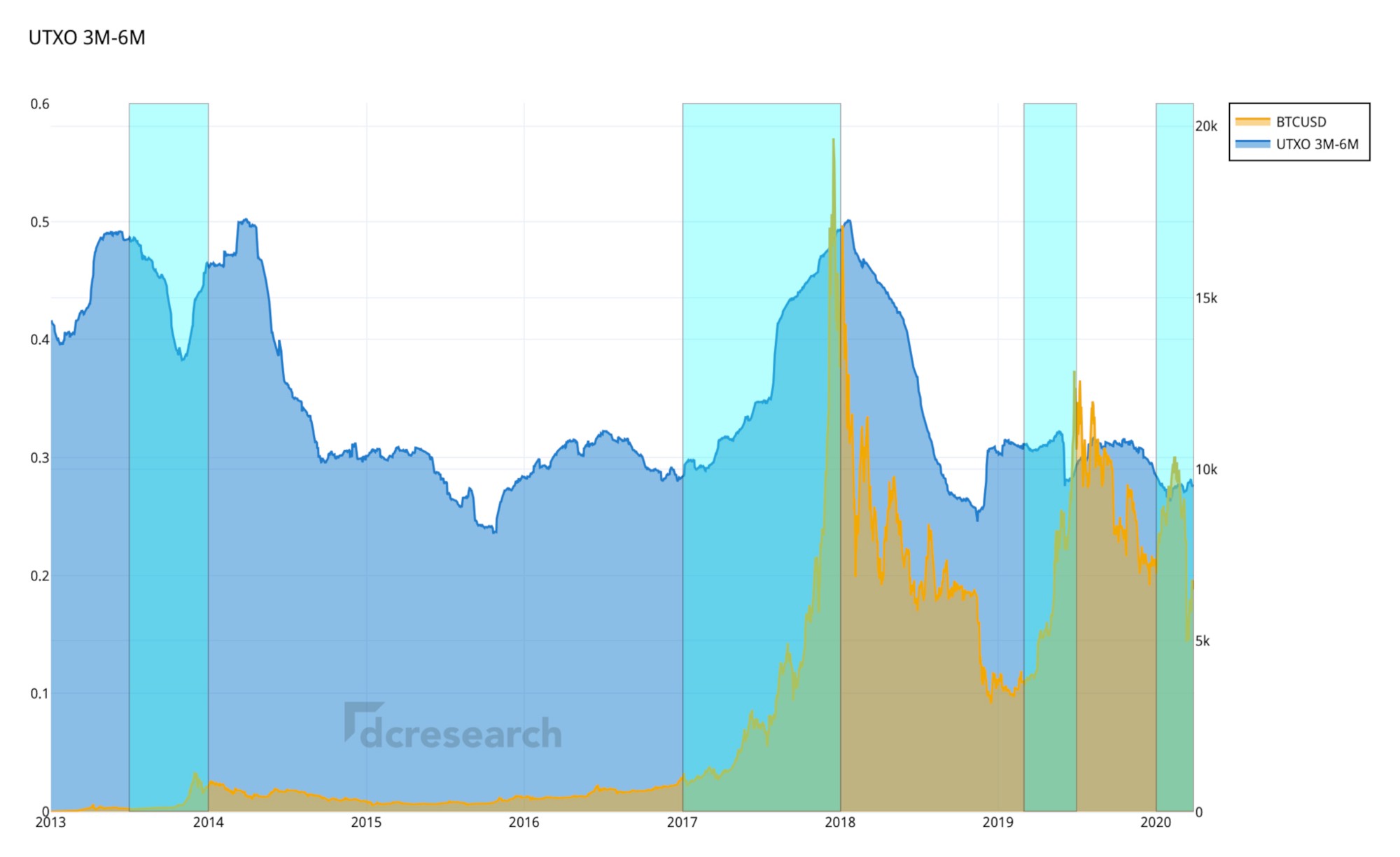 Unspent output from bitcoin transactions, or UTXO, offers notable possibilities for analysing the cryptocurrency market. Inside the bitcoin blockchain, every transaction creates a new UTXO, and the certain age of UTXO shows the block that the transaction was firstly included in. UTXO data can be utilized to track buying and selling patterns in the previous, current and upcoming market cycles.

Recent data by Glassnode shows a majority of UTXOs being in profit, despite the early March BTCUSD meltdown. Over mid-February >75 percent of UTXOs were estimated to be in profit. 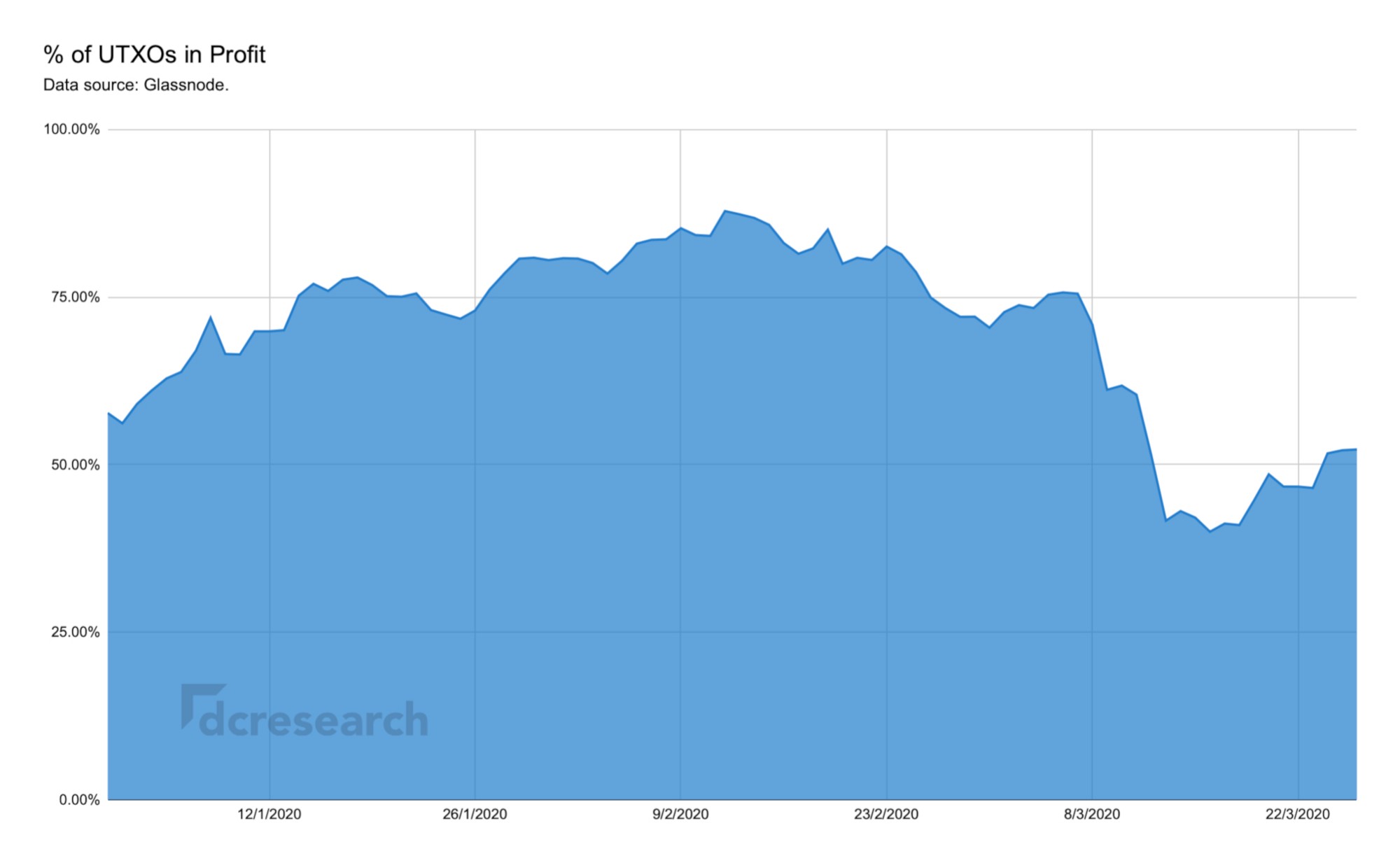 “Hodl Waves”, firstly showcased by Unchained Capital, calculate the age of a specific Bitcoin UTXO, meaning when it was last used in a transaction. A Hodl Wave is a time frame when many accumulated bitcoin and put them into cold storage. There have been 3 to 4 such mass accumulations with a large amount of UTXOs which have not moved since.

When exploring UTXO data, the trend clearly shows rapid growth in the UTXO line corresponding with uptrends and downtrends. As we saw at the end of 2017, continued price appreciation leads to a rapid influx of new users and fresh investments into bitcoin. 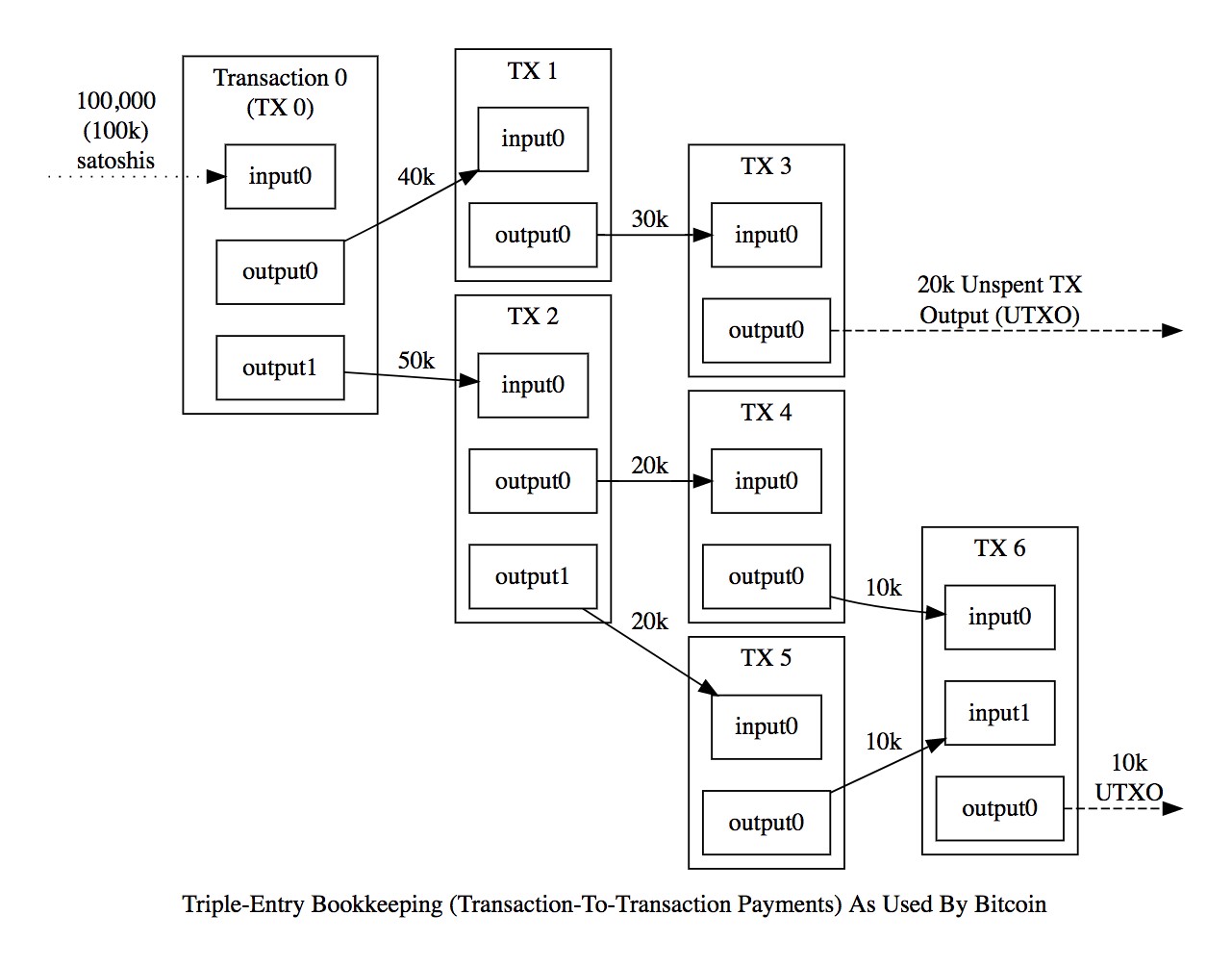 Each time bitcoins are sent, the network creates a new UTXO. The age of UTXO points to which block the particular transaction was first added and representing the last time when said bitcoin was moved. UTXO data allows bitcoin analysts to track the last time coins have moved.

A drop in cumulative UTXO age usually renders to increase in bitcoin activity. A rise in cumulative UTXO age represents more holding in the market, as smart investors typically accumulate when price decreases. The correlation between UTXO bands and BTCUSD is a relevant indicator for forecasting bitcoin market cycles.

Let’s analyze different UTXO bands and their correlation with bitcoin’s price (BTCUSD) by historical data. We analyzed four UTXO bands during major market trends from 2013 to 2020. 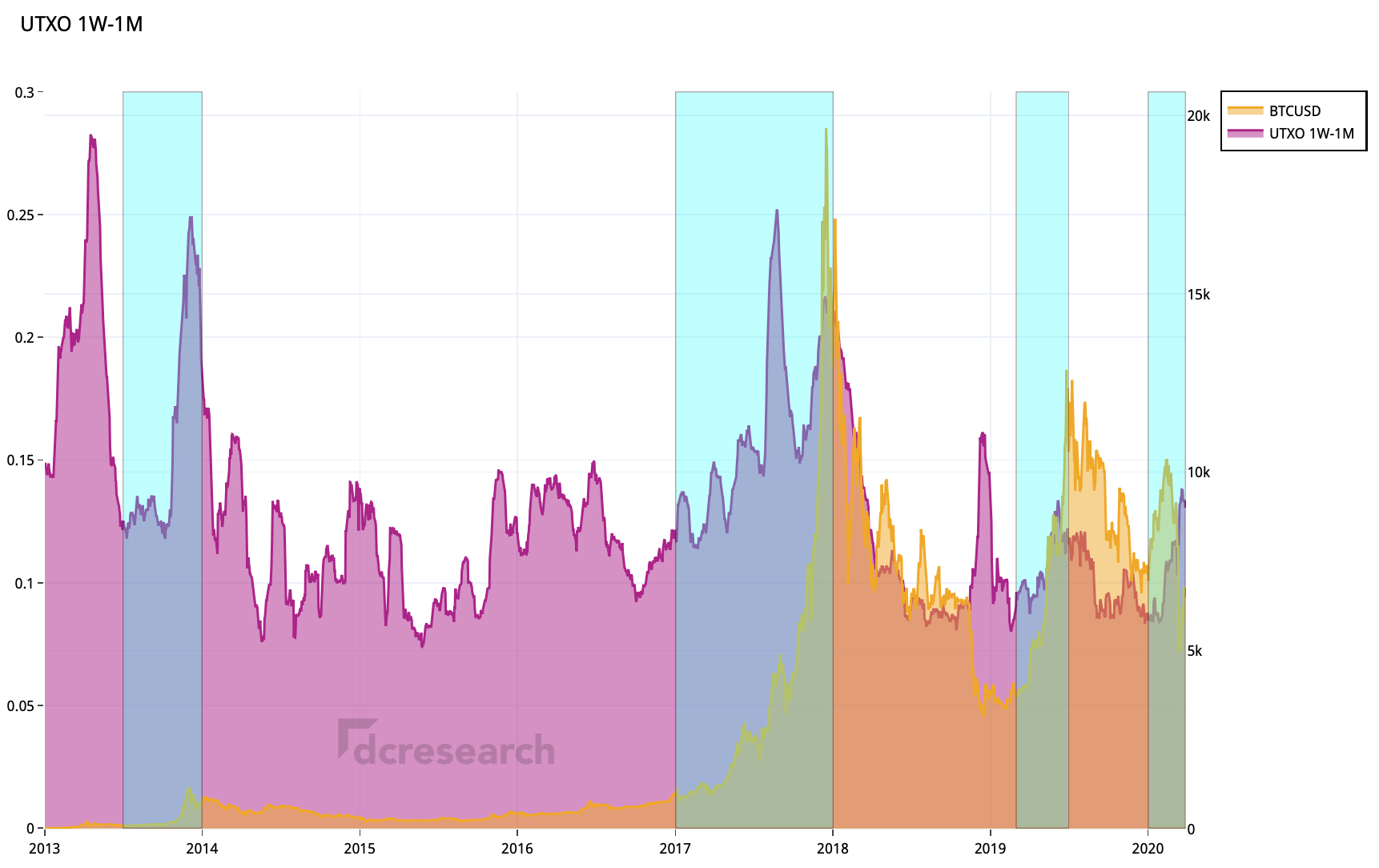 The UTXO data shows a clear correlation between 1W-1M UTXO band and BTCUSD in 2013 Q3-Q4 bull market. In late 2013, BTCUSD reached >1000$ for the first time after rising over 5000 percent. The amount of holders quickly increased with BTCUSD uptrend and accordingly decreased with downtrend.

After the late 2018 capitulation. 1W-1M UTXO band had a positive relationship over the second and third quarters of 2019.

1W-1M UTXO band was correlated with BTCUSD anew during first and second quarters of 2020. BTCUSD has been reaching new highs again in Q2 as the market tries to price in the upcoming halving event. Early 2020 UTXO band shows accumulation and increasing holding with BTCUSD pointing up. 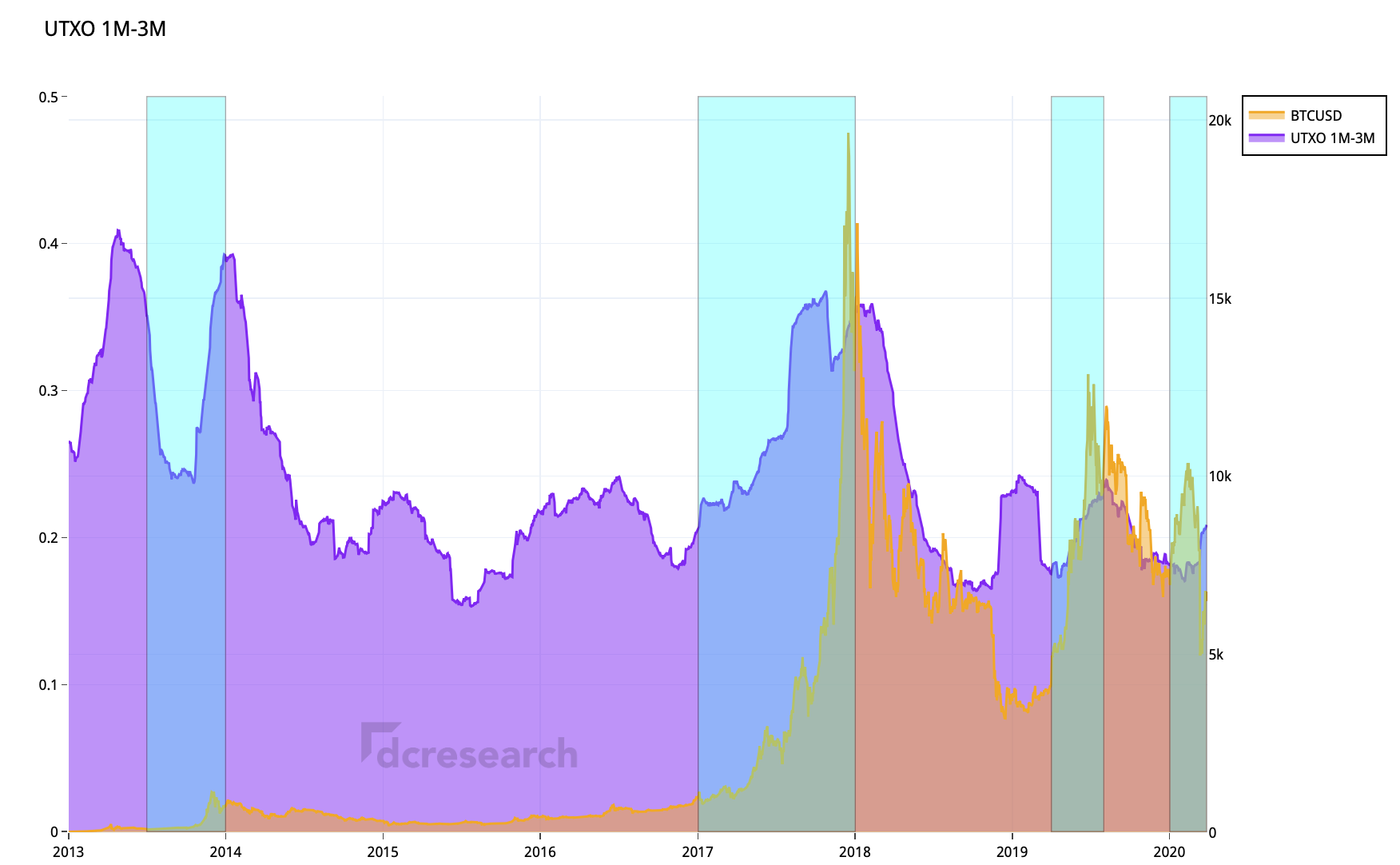 Correspondingly to other UTXO bands, 1M-3M UTXO correlated with BTCUSD price after bottoming in Q1. 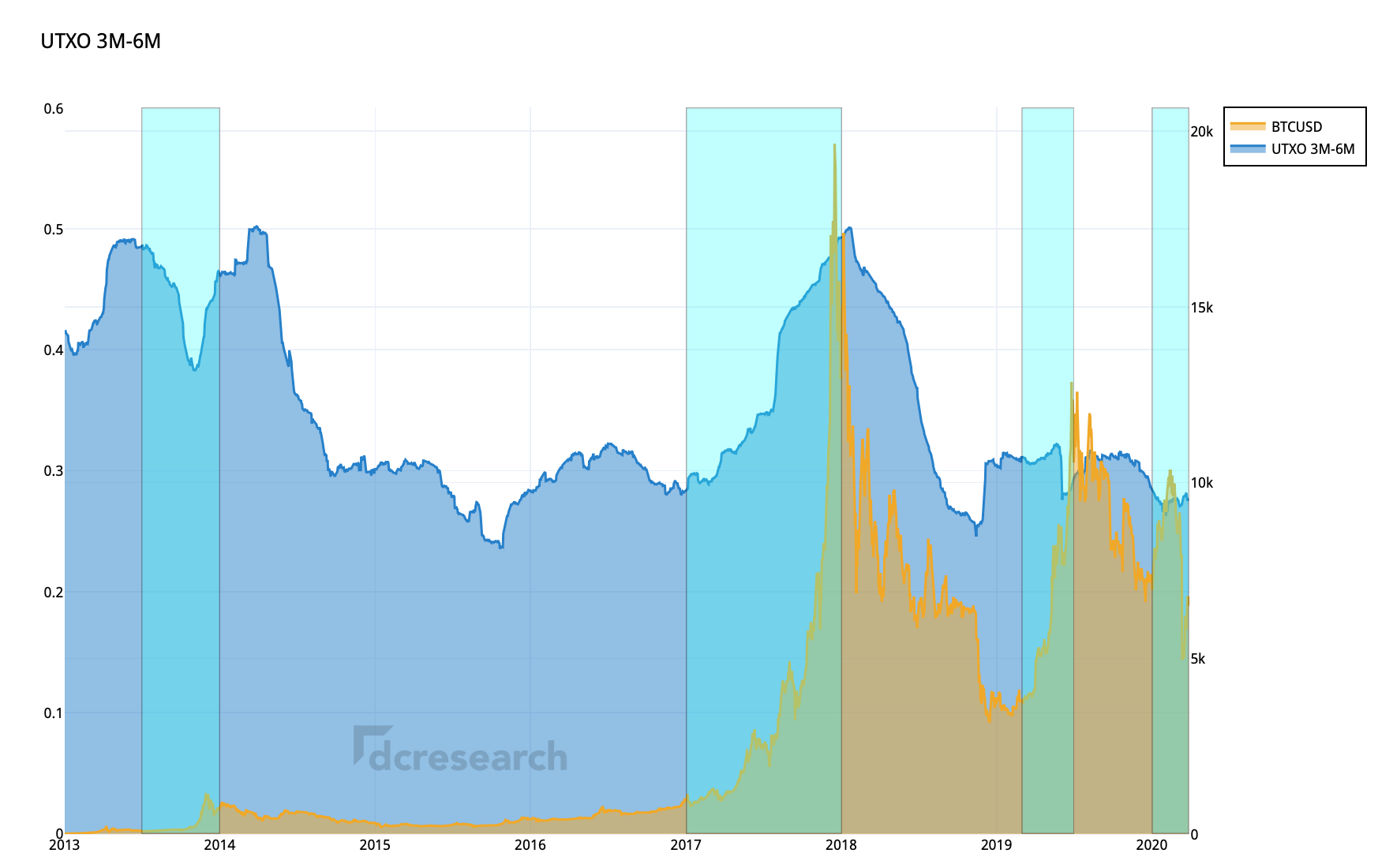 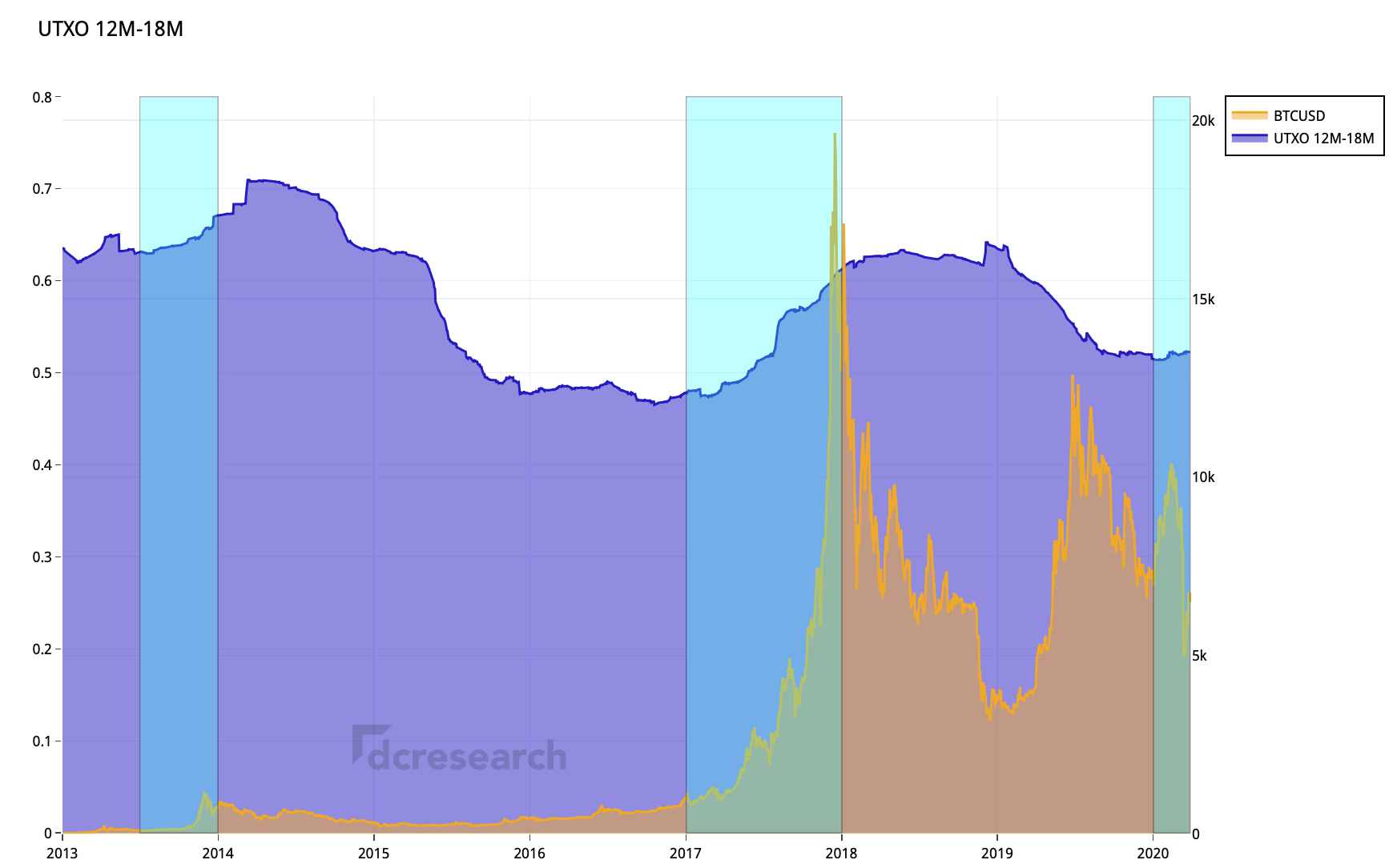 Early 2020 and H1 show slight accumulation of bitcoin and correlation with BTCUSD. Possible beginning of a bull market in close proximity to 2020 halving.

Recent data shows retail investor segment accumulating bitcoin, as the amount of addresses containing from 0,01 to 1 bitcoin or more, has grown from 2019 into H1 2020. 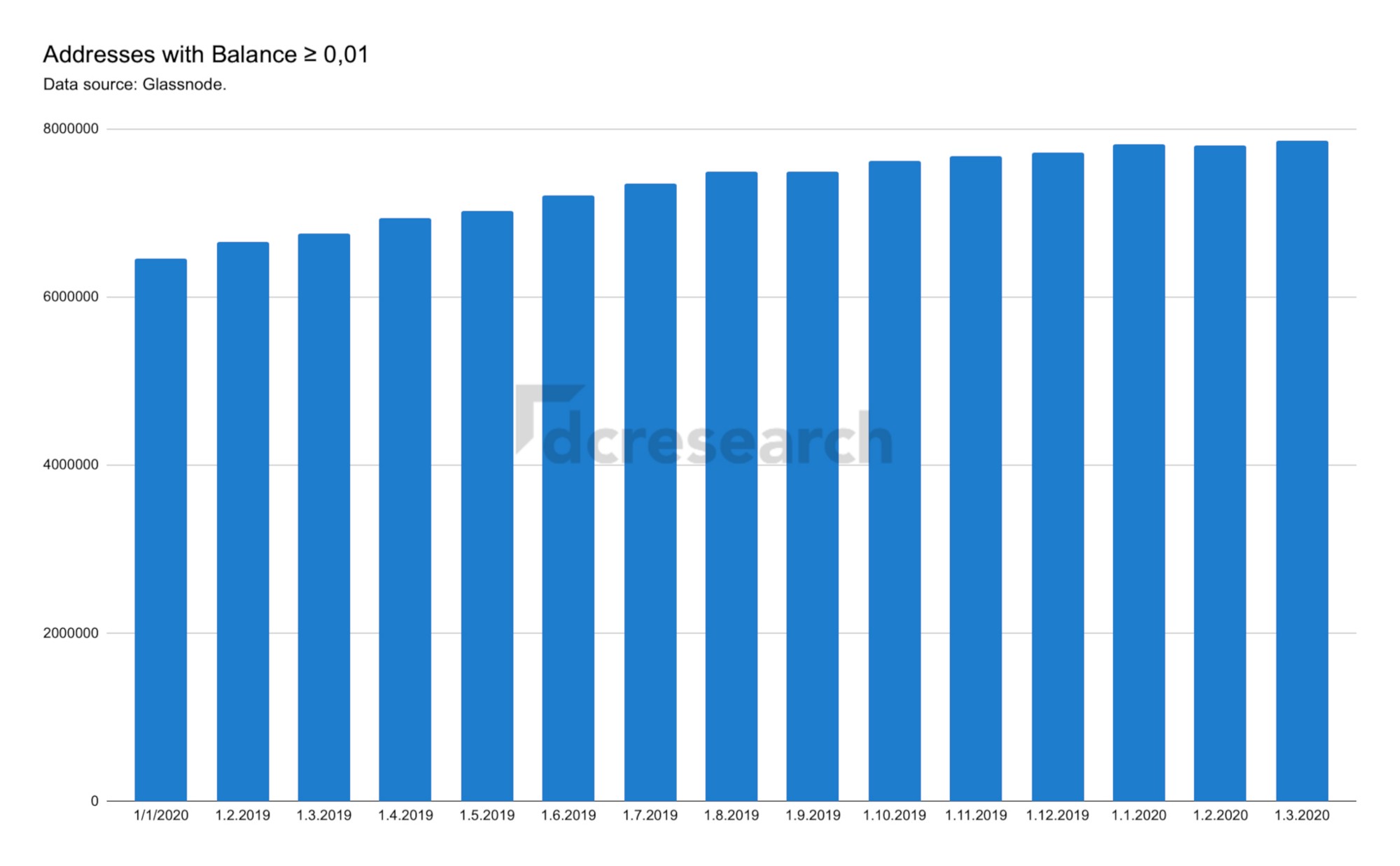 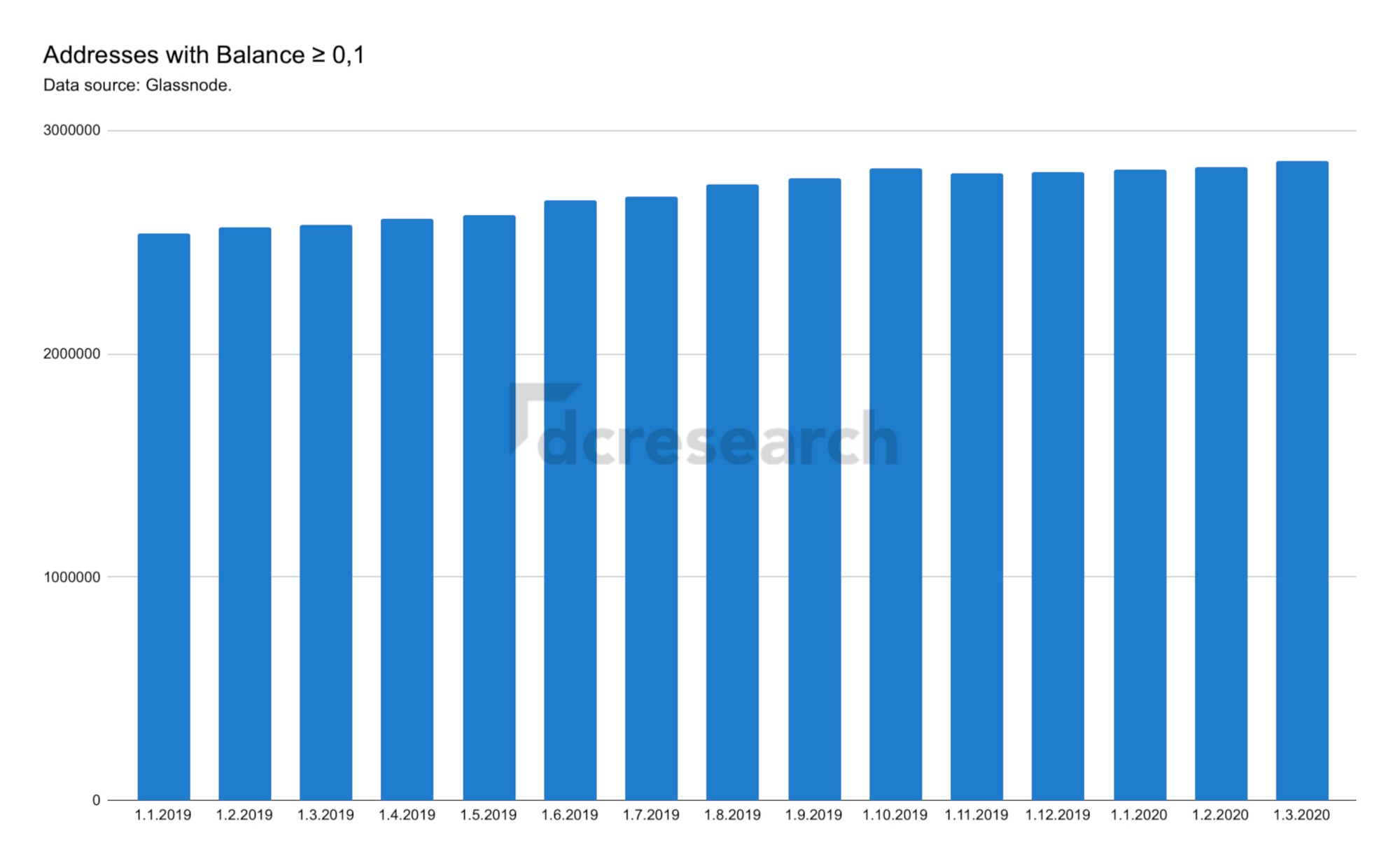 The amount of small addresses also indicates growing segment of investors buying small amount of bitcoin, for the first time. 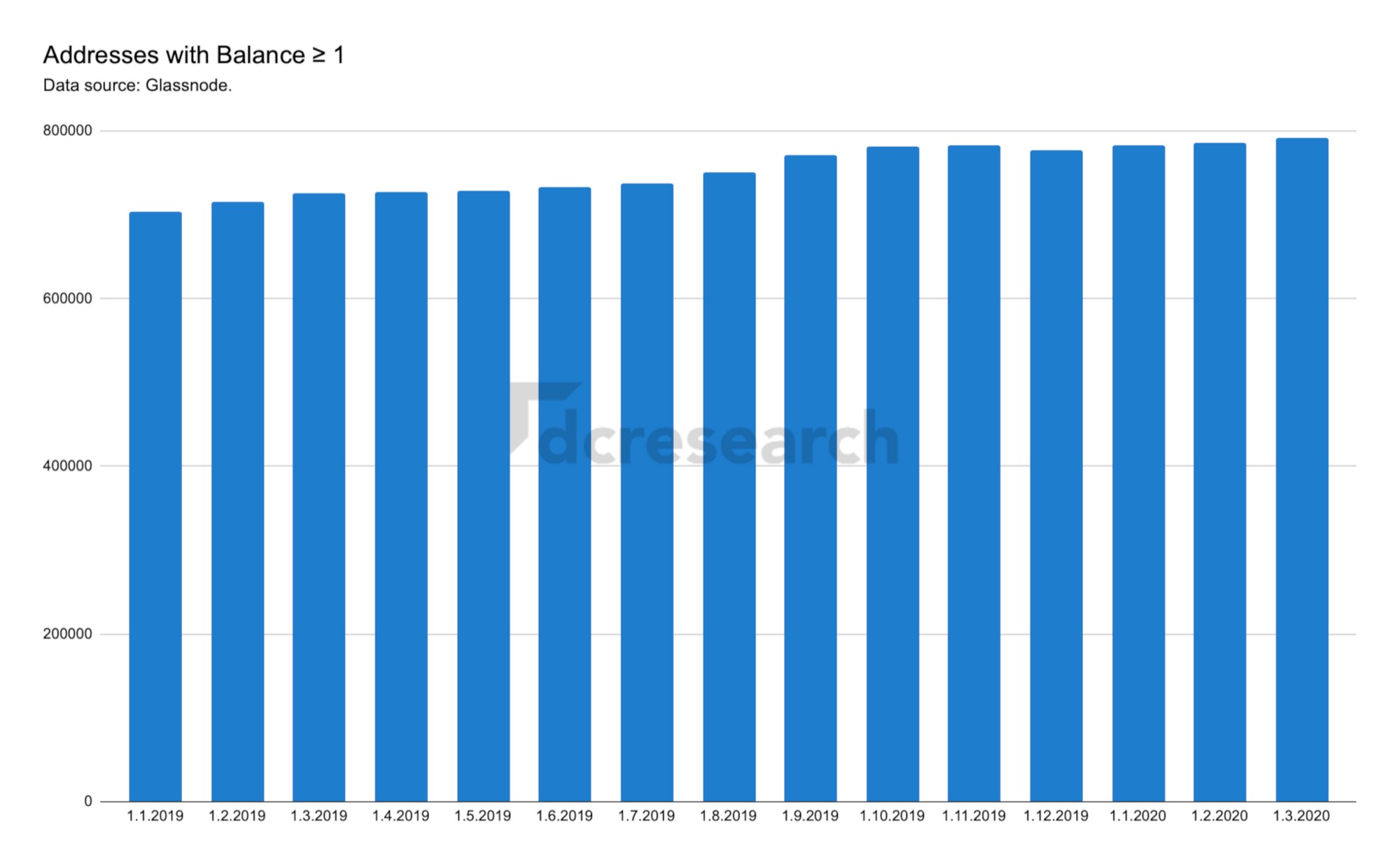 In addition to increasing retail investors, institutional interest is growing. Over the first quarter of 2020, 88% of Grayscale’s investors were institutional, including a large share of hedge funds. A majority of these hedge funds were multi-strategy (46,1%).

Renaissance Technologies, one of the largest hedge funds globally, has shown interest in the bitcoin futures market. The firm announced their Medallion Funds are now permitted to enter into bitcoin futures transactions. The firm would limit its trading activities to contracts traded on the CME, for now.