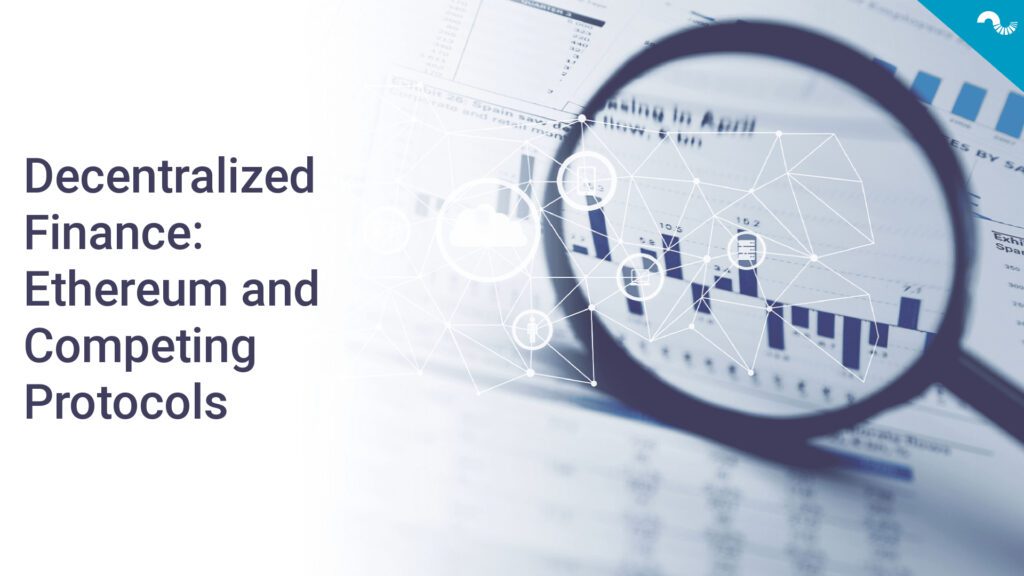 This article takes a deep dive into the concept of decentralized finance (DeFi), different blockchain layers and scaling. Additionally we asses the market leader Ethereum and its most plausible competitors.

The Definition of Decentralized Finance

Decentralized Finance (DeFi) has evolved into the main driver of growth in the blockchain industry during recent years. Decentralized finance can be described as a cluster of decentralized applications (dapp), that are built on blockchain technology.

The decentralization is achieved by using smart contracts, where the rules of the contract are embedded into code and implemented automatically. All transactional data is saved into a distributed ledger. The process makes sure that no single party has unilateral control over transactions, which would potentially allow censorship and disruption.

The decentralized finance applications are operated on two layers, which are named Layer-1 and Layer-2. The Layer-1 means the actual blockchain, while Layer-2 refers to upper layer used for scaling purposes.

The growth momentum of cryptocurrencies and blockchain applications has been massive and the market capitalization of Bitcoin alone has climbed from 2016’s couple of billion US dollars into current > 800 billion. The rising transaction amount moves the focus into network scalability and effective supply to growing user base.

The Layer-1 (or L1) refers to blockchain protocols like Bitcoin (BTC) and Ethereum (ETH). The protocols of Layer-1 have been largely based on PoW mechanism (Proof-of-Work), which is secure but somewhat slow. The Layer-1 revolves around computing power and thus it’s been criticized for high energy consumption although PoW can utilize green energy sources.

The scaling of Layer-1 has been tried to improve by moving into PoS (Proof of Stake) consensus mechanism, which is mandated by the staked amount of tokens instead of computing power. PoS is expected to enhance scaling, however it also entails security-related compromises. The structure of PoS protocol is also more centralized than PoW.

In addition to Proof of Stake the layer one is scaled by using sharding technology, which splits the transactions into smaller pieces. These pieces or “shards” can be used parallelly in a blockchain, allowing the processing of multiple transactions at the same time.

The Layer-2 (L2) refers to network or technology built on Layer-2. Probably the most well-known L2 is Bitcoin’s Lightning Network (LN). The Layer-2 applications are especially used for PoW scaling. Most popular Layer-2 technologies are nested blockchains, state channels, and sidechains.

Sidechains are used in parallel to Layer-1 in order to settle large transactions. The sidechains are using different consensus mechanism than the L1, which can be optimized for scaling. Likely the most known sidechain is RSK, operating on top of Bitcoin. The sidechain transactions are not private and they’re added to the public blockchain. Additionally the construction of a sidechain requires huge resources as the whole infrastructure needs to be built from the ground up.

The Categories of Decentralized Finance and Total Value Locked

Lending is the second biggest DeFi category with $44,19 billion of value locked. The open-source lending platform Aave is a significant operator in this segment, known for its flash loans. Third largest category is yield protocols with a TVL of $17,58 billion.

The fourth biggest category is algorithmic stablecoins with $17,58B TVL. Protocols like Frax Finance have succeeded at building a functioning algo stablecoin and Frax’s TVL has increased up to $2,27 billion. Somewhat surprisingly staking is only worth of $11,35B, a mere fourth of the size of lending.

Ethereum is a legacy decentralized finance platform that dates back to 2015. Originally launched by Vitalik Buterin and Gavin Wood, the value proposition of Ethereum has revolved around the “world computer” concept that would operate all decentralized application on one platform.

Subsequently Ethereum’s narrative has been upgraded and in 2017 the platform was the epicenter for (in)famous ICO funding rounds. Ethereum operates as a platform for decentralized applications simple dubbed as dapps, and more recently for NFT (non-fungible token) art.

The EIP-1559 upgrade has been radically decreasing Ethreum’s supply by moving the focus towards digital scarcity. This new paradigm can be seen as a move towards Bitcoin-like features.

The increasing scarcity is implemented by systematic Ether burning and by current estimation ETH will reach its estimated supply peak in July 2022. The supply will peak at 118,5 Ether units.

The decentralized finance pioneer Ethereum is undoubtedly the industry leader with $327,18 billion market capitalization and it has a unique first-mover advantage. Nonetheless the DeFi scene is running hot and new “Ethereum killers” are being spawn every day. As Ethereum is still switching from PoW to PoS, most of its competition is already using PoS protocol.

The three most plausible Ethereum competitors are Cardano (ADA), Solana (SOL), and Avalanche (AVAX). The market caps of Cardano and Solana are are almost in parallel but the smaller Avalanche has a 10 billion lower market cap.

Cardano is a $32,87 billion decentralized ecosystem and a emerging Ethereum competitor. Cardano’s approach is said to be more scientific than Ethereum’s and its backed by years of research. Cardano was founded by distinguished software engineer Charles Hoskinson who previously worked at Ethereum.

Cardano’s transactional costs are small compared with Ethereum and its capacity rises to 270 tx/s, a 20 times more than Ethereum. Cardano is the oldest of these Ethereum rivals as it was already launched in 2017. Regarding the age of the platform the development has been relatively slowish and developer community is small compared to Ethereum. Nevertheless Cardano has an established position within DeFi.

Solana was definitely one of retail hyped tokens in 2021 and those lucky investors who could hold SOL from January to December could enjoy a ROI of up to 11 000 percent. However Solana’s reputation started to fade in late 2021 as the network was targeted by DDoS attackers and it went offline for days. These attacks embarrassingly revealed the security flaws and non-decentralized structure of Solana.

Solana network was built for speed and it can handle 65 000 transactions per second, eclipsing Ethereum’s 15 tx/s. When assessing Solana from scalability trilemma perspective the project has weighted speed over security. Solana is a lot more centralized than Ethereum and some experts say it’s basically running on Amazon AWS.

Avalanche is the smallest project of the three by market capitalization and its attracting increasing investor appetite. Avalanche was built by Emin Gün Sirer and his team, collaborating with Cornell University. Avalanche’s value proposition is to tackle weak scaling in blockchains.

In the current testnet Avalanche is capable of settling 4500 transactions per second and it’s been promised to reach 20 000 tx/s when fully launched. In contrast to other blockchains Avalanche doesn’t use L2 or sharding, instead all transactions are handled in its own L1. Avalanche additionally promises to enhance cross-chain interoperability.

Ethereum (ETH), Aave (AAVE), and Uniswap (UNI) can be purchased directly on Coinmotion’s platform. Other more exotic assets like Cardano (ADA), Solana (SOL), and Avalanche (AVAX) can be acquired via our Coinmotion Wealth service.