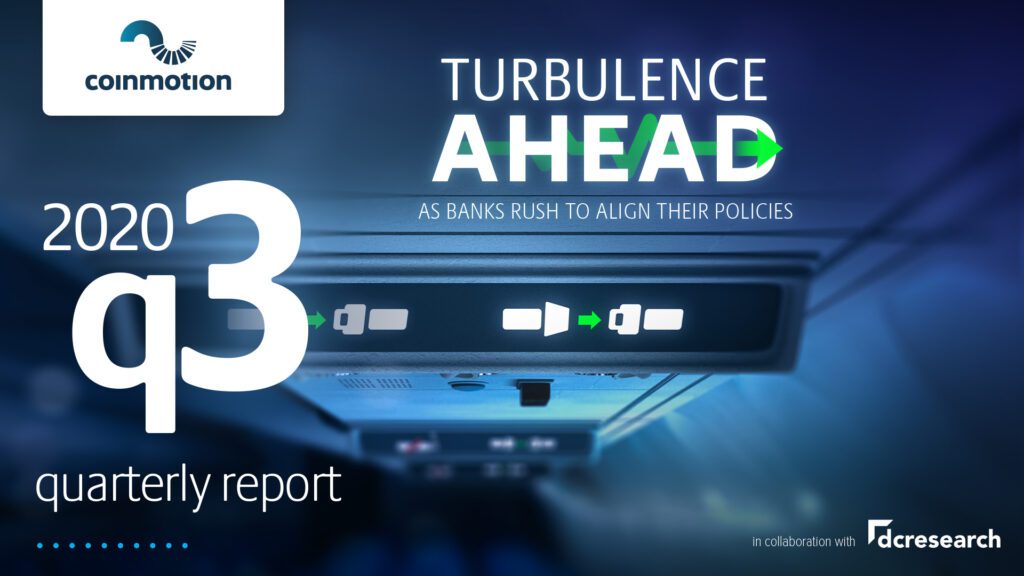 The latest cryptocurrency market report for Q3/2020 has been published. The past quarter was strong especially for bitcoin. Bitcoin market dominance grew during the quarter and the same trend has continued in October and November as well.

In this report we take a deep dive into the central bank policies in different regions of the world following the economic crisis caused by COVID-19.

You can download the full cryptocurrency market report here.

Huge rise in the amount of dollars in circulation in 2020

In order to stabilize the economy amid the COVID-19 disease, central bank policies have radically aligned towards quantitative easing and expansive monetary policies. The total monetary base of the United States has increased to 4,8 billion dollars in August. Representing 1,4 trillion USD increase in 2020 alone, rising from January 3,4 trillion and peaking at 5,1 trillion in May. 22 percent of the total dollar amount in circulation was created during 2020 alone.

Institutional adoption of bitcoin is on the rise

Institutional growth has been one of the main driving forces behind the developing digital asset industry. In 2020 institutions are holding more bitcoins than ever and institutions like Grayscale LLC are estimated to own up to 3,4 percent of all bitcoins by 2021.

Bitcoin allocation of publicly traded companies are on a steady climb too. Grayscale is forecasted to own a whopping 3,4 percent of all bitcoins by 2021. The current estimated amount of bitcoins in Grayscale’s Bitcoin Trust (GBTC) is 449 596 ($5,18 billion), making Grayscale the leader in terms of bitcoin holdings in the U.S. and worldwide. CoinSharesis the second largest institutional bitcoin holder with 69730 BTC ($803,43 million), mainly operating within EU jurisdiction.

Tether maintains position as the No 1. stablecoin

The first widely adapted stablecoin Tether is still dominating despite the increasing number of competitors. In the report we take a closer look at the stablecoin market. Below you can see other main topics of this cryptocurrency market report.