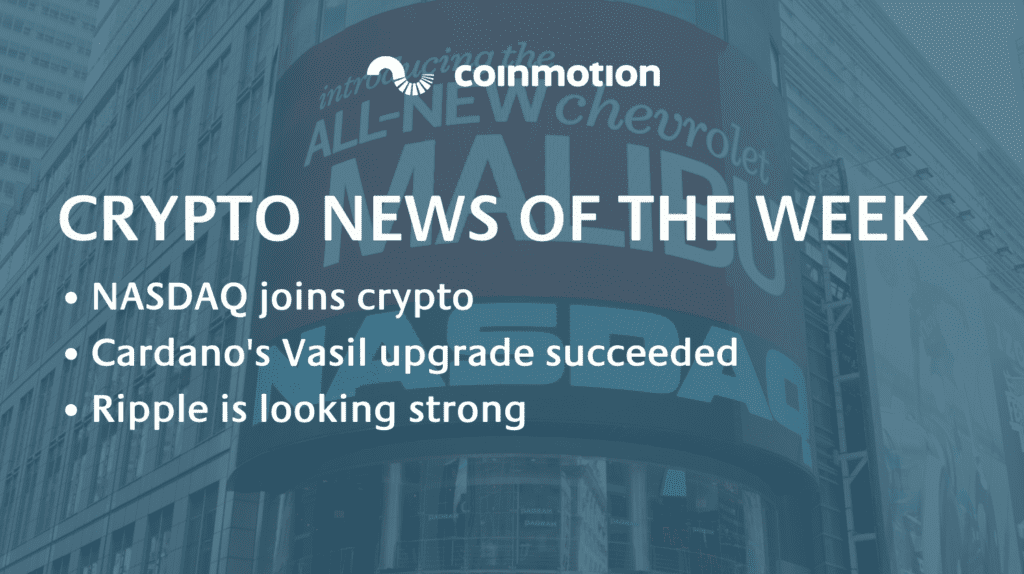 We have witnessed another eventful week in crypto. The global adoption of cryptocurrencies took significant steps forward again on the corporate and institutional side. During the week, the crypto community discussed Nasdaq’s crypto plans, the crypto payment system developed by Stripe, and Cardano’s Vasil hard fork.

The stock exchange Nasdaq sees the potential of cryptocurrencies and is preparing a new digital finance service that offers cryptocurrency custody for institutions. Nasdaq has assembled a digital finance team led by Ira Auerbach, who was previously in charge of prime brokerage services at the crypto exchange Gemini.

Until now, the lack of regulation and unreliable services have been an obstacle to adoption. Nasdaq is a globally functioning and reliable service that will surely solve the trust problems of institutions towards cryptos.

Nasdaq is a global stock exchange where you can buy and sell securities. Its name originally came from the words “National Association of Securities Dealers Automated Quotations”. Nasdaq’s operations started on February 8, in 1971.

Nasdaq is headquartered in New York and operates in 29 different markets enabling the exchange of stocks, derivatives, commodities and other securities. Its trading technology is used in 100 different exchanges and in 50 different countries.

In 2021, Coinbase promised to grow into the “Amazon Web Service of cryptocurrencies”. In practice, Coinbase wants to control the infrastructure of the crypto market. Now Coinbase Cloud is aiming for the market share of Web3 development services.

A new developer platform called Node enables its users to create and monitor Web3 applications. There is also a paid version of Node, but the free version already includes advanced API possibilities for developing decentralized applications and NFT applications.

Coinbase Cloud promises the platform will work faster to create Web3 applications while reducing their complexity and cost.

Coinbase has set out to develop the platform with the goal of providing developers with easy tools to build decentralized applications. Coinbase’s decision-makers have said that they want the services to be at the same level as Amazon Web Services, but for cryptocurrencies. Amazon Web Services is the world’s largest server operator, which enables many internet-based services.

Web3 is the next step of the Internet. Web3 includes blockchain technology, decentralized technology, and ecosystems based on crypto tokens.

At the moment, anyone and anywhere can access the internet. Big companies can collect information about what you do online and monitor your activities very closely.

As blockchain technology becomes more common, it is believed that the control would transfer to users. Users could, for example, use a crypto wallet to identify themselves to different online services, which enables completely new dimensions. What if you were paid a fee for using your personal data and not the other way around?

Web3 technology enables better protection for your data, scalability for applications, and privacy protection. Many have been concerned that decentralized services allow anyone to access malicious sites. According to some, Web3 is just a marketing term and has no meaningful use.

Cardano has released a new Vasil hard fork, a major update to its blockchain. The update is the biggest since September 2021.

The long-awaited Vasil update was finally released on Thursday and it should improve the functioning and possibilities of the blockchain. It is seen as a big win for developers and one of the most impressive and complex updates to the Cardano network.

The release of the development was delayed for many months due to problems in the testnet, but it finally got the green light for release in September. The update improves the functionality of smart contracts and the processing of transactions.

Charles Hoskinson co-founded Ethereum and noticed the flaws in its platform. He set out to develop his own blockchain and designed it from the beginning to work in the best possible way.

The development has been done very slowly and surely. The slowness of development has negatively affected the interest of Cardano in the eyes of investors who expect quick profits from the market.

After the release of Cardano, it said it was the next step for Ethereum, and it already worked directly with the Proof of Stake algorithm, which Ethereum only now got access to after many years of waiting.

Cardano’s blockchain works on two different levels, which is why its operation is said to be really efficient and enables better opportunities for developers. The blockchain has its own layer for transactions and another layer for processing smart contracts.

Cardano’s plans are really ambitious, and it is practically built from the bottom up. Ambitiously designed features take time to develop. However, everything is slowly starting to come together according to their plans, as can be seen from the current Vasil update. It will be interesting to see how the market reacts to the update in the coming weeks. After the update, Cardano’s price has been on a small decline.

Ripple on an uptrend

Ripple has had a tough time in recent years, as its operations have been constantly under the scrutiny of the US Securities and Exchange Commission, SEC.

In the last few days, the value of Ripple has increased by tens of percent. It is currently the sixth largest cryptocurrency, which is why changes of tens of percent are significant.

The recent increase in value suggests that the years-long legal battle between the SEC and Ripple is finally coming to an end, and Ripple would be allowed to continue operating as usual.

Analysts estimate that Ripple’s value will rise to at least its former peak if Ripple finally wins the legal battle and can continue its operations in the same way.

If you listen to the rumors, then Ripple is supposed to be used really widely in transferring money, especially across borders.

With the help of the system, it is possible to send money to the other side of the world quickly and at a minimal cost compared to today. It can take days for banks to transfer money and hours for Bitcoin, which is a big difference to Ripple’s operation.

Compared to other cryptos, Ripple is really centralized, as its operation is maintained only by a predetermined group of actors. A large part of Ripple’s coins are out of circulation, and launching them all at once can have a big impact on its value.

Ripple can be used like any other cryptocurrency, i.e., for exchange or investment. Ripple’s network can also be used to exchange currencies digitally.

One of the founders of USDC says that stablecoin is a better way to send money to people around the world.

There are more than a billion people outside of banking services, and it is difficult for freelancers operating in such countries to get paid for their work.

Stripe estimates that currently, around 4,4 billion people have the opportunity to receive rewards in the form of USDC coins.

Stripe has already enabled support for Bitcoin since 2015 and was the first major player to get involved in cryptos. In 2018, the company removed cryptocurrencies from its services, and after the bull run of 2021, it has re-entered cryptos.

The majority of unbanked people globally are women. It is estimated that there are up to one billion women in the world who do not have access to banking services, which is 55 percent of all unbanked adults in the world.

Most of the unbanked are in China, India, and Africa. They either don’t have money or access to banking services. Many also say that banks have expensive and slow ways of processing payments.

New technologies, such as blockchains, allow people outside of banking services an easier way to manage their money. You can set up a crypto wallet quickly and without the unnecessary bureaucracy of banks, and it is easy to send money abroad cheaply.

The Bank of Russia and the Ministry of Finance have reached an agreement and accepted cross-border payments with cryptocurrencies.

In the past, Russia had completely banned the use of cryptocurrencies, but recently the mindset has changed a lot. Due to sanctions, Russia is largely blocked from traditional money transfers, so naturally, cryptocurrencies come into the picture.

Russia’s attack on Ukraine has resulted in the EU and NATO limiting the state’s economic activities. The SWIFT system maintains international payment traffic. With the sanctions, Russia has no longer had the opportunity to send money through the SWIFT system.

SWIFT is used by thousands of financial institutions in more than 200 different countries and it provides a secure communication network for transferring money across national borders.

Some analysts have compared leaving the SWIFT service to having to physically send letters instead of emails. This has led to the fact that economic activities in Russia have been made much more difficult.

Collecting stamps has not been fashionable among young people for a long time. Much of the time is spent in the digital world, where physical stamps have no business.

A few European postal operators have come up with the idea to monetize the popularity of NFT technology and shift interest from regular stamps to NFT tokens on blockchains.

Digital stamps have received really significant attention on the internet, and they have therefore started to be worked on more widely.

Although a similar activity has already been done for a few years, now the Austrian and Dutch posts have joined forces and are developing stamp collections that work with NFT tokens. The companies believe that they will revive the dying collecting genre in the form of new technologies.

Austria Post has already tried working with NFT stamps since 2019, and the operation has only expanded more this year in a more advanced direction.

Create your account with Coinmotion today to start investing in cryptocurrency