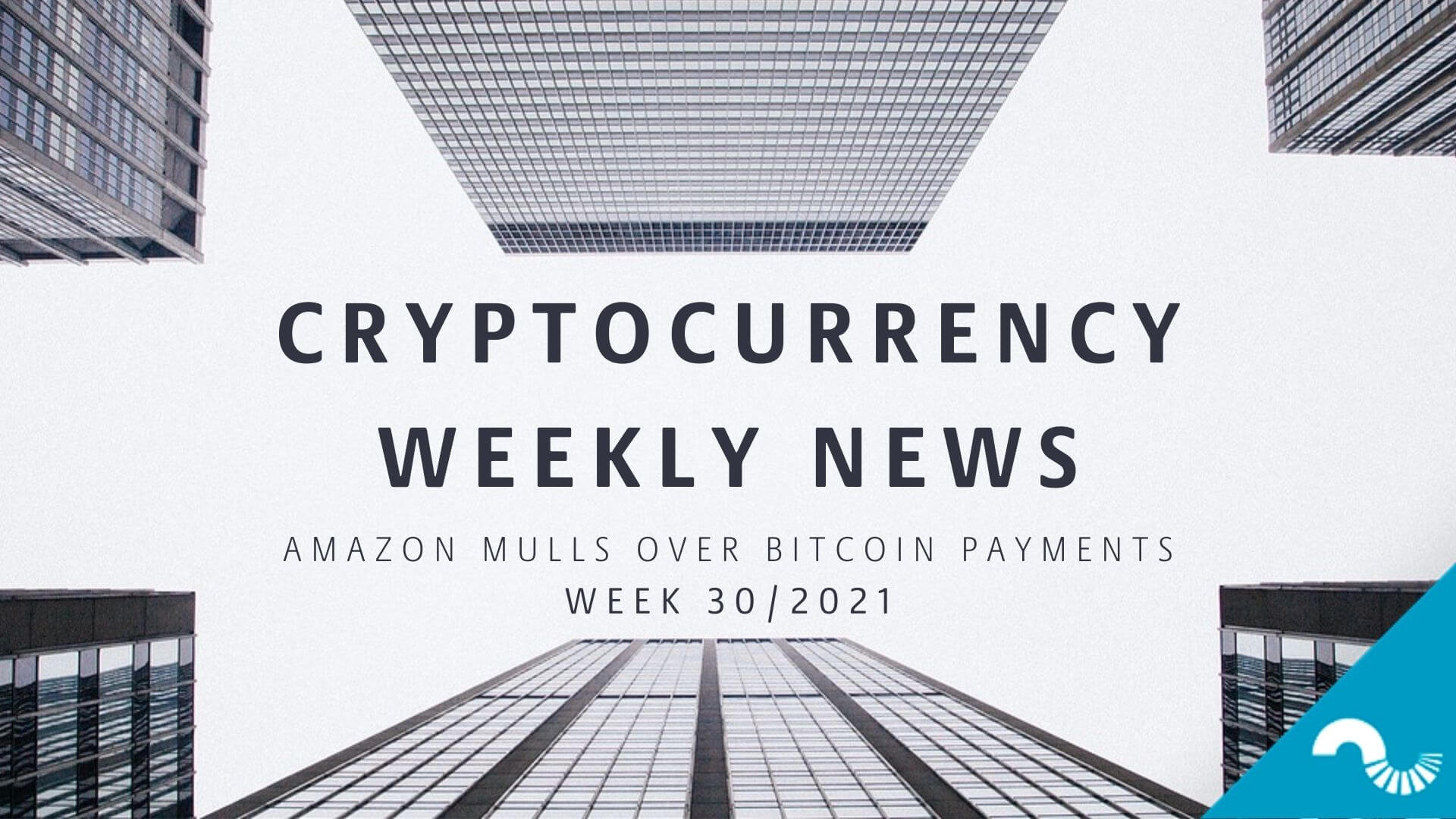 Bitcoin’s price has again begun rising and risen toward and above $40 000 dollars. One reason for the subsiding fear among investors seems to be rumors from Amazon, indicating the e-commerce giant may be integrating Bitcoin payments into its services by the end of the year. Amazon has so far denied these rumors, but this has been a common practice among companies before the actual launch and rollout of payments.

The recent price rise may also have been affected by the usual summer silence on the markets. Corrective movements tend to occur both up and down. When the price goes down, it often drops out weak hands and gives stronger hands the chance to accumulate more cheap crypto. As a result, the pressure for rising prices grows, which may be the case now as well.

This week we will take a closer look at Amazon’s possible plans. Additionally, the popularity of Bitcoin among US investors has grown up to hundreds of percent, while other giant firms such as Tesla, Twitter, and SpaceX have varying interests. In other news, we have El Salvador and warnings by IMF about how adopting Bitcoin may lead to unstable prices, money laundering, and so forth.

E-commerce giant Amazon has for a while been rumored to be planning some sort of cryptocurrency integration. Now, these rumors appear to have been confirmed by several sources.

Firstly, Amazon has announced a job post for a digital currency and blockchain product leader. Secondly, news agency City A.M. has interviewed an alleged inside source from Amazon, according to whom the company will integrate bitcoin and crypto payments by the end of the year.

“This isn’t just going through the motions to set up cryptocurrency payment solutions at some point in the future – this is a full-on, well-discussed, integral part of the future mechanism of how Amazon will work,”  the source told City A.M.

Amazon has, however, at this point refuted all rumors. A representative for Amazon told news agency Reuters that while Amazon still has an interest in the crypto industry, the circulating rumors are not true.

Cryptocurrencies will play a big part in Twitter’s future

Twitter CEO Jack Dorsey has reported that Bitcoin will have a large role in the social media platform’s future plans. Dorsey spoke of the matter in a second-quarter reporting event for investors.

According to Dorsey, bitcoin is the best candidate for a native internet currency. He told investors that current and upcoming Twitter products, such as Super Follow and Tip Jar, will become easier to use and more accessible with Bitcoin.

“I think this is a big part of our future. I think there is a lot of innovation above just currency to be had, especially as we think about decentralizing social media more and providing more economic incentive,” Dorsey said.

So far details about when or how the integration will take place have not surfaced. However, Dorsey has already spoken in favor of crypto for a while, so it seems to only be a matter of time.

Jack Dorsey is a long-term crypto enthusiast and Twitter’s full-scale crypto integration seems to be only a matter of time.(PHOTO: cellanr – CC BY-SA 2.0)

BTC popularity has tripled among US investors

Bitcoin’s popularity particularly among young investors has grown significantly in the past years, reports a study by global analytics firm Gallup. The study reveals that interest, awareness, and ownership of crypto have all seen an increase.

According to the study, the number of investors owning bitcoins in the United States has tripled between 2018 and 2021. Earlier 2% of investors owned bitcoins, while the number has grown to 6% this year. Gallup’s study defines investors as adults with over $10 000 dollars or more invested in stocks, bonds, or funds.

Bitcoin’s popularity particularly among young investors has been astonishing, with ownership growing from 3% to over 13%. Investors aged 50 or more had lower interest, although their number has also tripled from one to three percent in the span of three years.

The number of Bitcoin and crypto investors has grown almost continuously since their dawn.

In June, the network’s mining power entered a steep decline after China decided to crack down on the mining industry in the country. The recovery indicates the country’s measures have been completed to some extent and different mining parties have taken over elsewhere in the world.

“As the most severe impact of the Chinese mining ban is done and dusted, the hash rate will likely trend upwards in the coming months as more miners are moved to other regions,” the analysis concluded.

Bitcoin’s mining power suffered a blow after China’s measures but still remains higher than any other decentralized computing project.

Elon Musk’s electric car company Tesla has started hodling bitcoins during the second quarter of the year, as reported by its Q2 earnings presentation. The company currently holds $1.3 billion dollars worth of BTC.

In February, Tesla purchased bitcoins for $1.5 billion but ended up selling a share of 10% to uplift their Q1 profits by $272 million. Meanwhile, Musk also revealed his other company SpaceX hodls bitcoins. Musk has asserted that he or his companies have no intention of selling more bitcoins at least in the near future.

Musk has also told that Tesla may back down on its decision not to accept bitcoin as payment for its products. In May, Tesla shut down bitcoin payments citing Bitcoin’s environmental concerns. After that Musk has stated that Bitcoin is going toward a better direction, so the company may reconsider its stance.

Elon Musk or his companies have no intention of selling bitcoins for now. In other words Musk hodls.

High-ranking officials at the International monetary fund IMF have issued warnings to El Salvador, who decided to make bitcoin a legal currency in the country. According to IMF marketing director Tobias Adrian and legal department director Rhoda Weeks-Brown, the results of accepting bitcoin as a national currency could be dire.

According to the representatives, accepting cryptocurrencies as legal tender could lead to domestic prices becoming unstable. Additionally, they warned that cryptocurrencies could be used against international laws against money laundering and terrorism.

“If goods and services were priced in both a real currency and a cryptoasset, households and businesses would spend significant time and resources choosing which money to hold as opposed to engaging in productive activities,” Adrian and Weeks-Brown said.

Adrian and Weeks-Brown also stated that cryptocurrencies in wider use could weaken the influence of countries over monetary policy. Ironically, this independence of governmental control is one of the very factors why consumers and companies see potential in bitcoin and cryptocurrencies.

IMF has once again warned about Bitcoin’s risk of transferring power away from states and central banks.