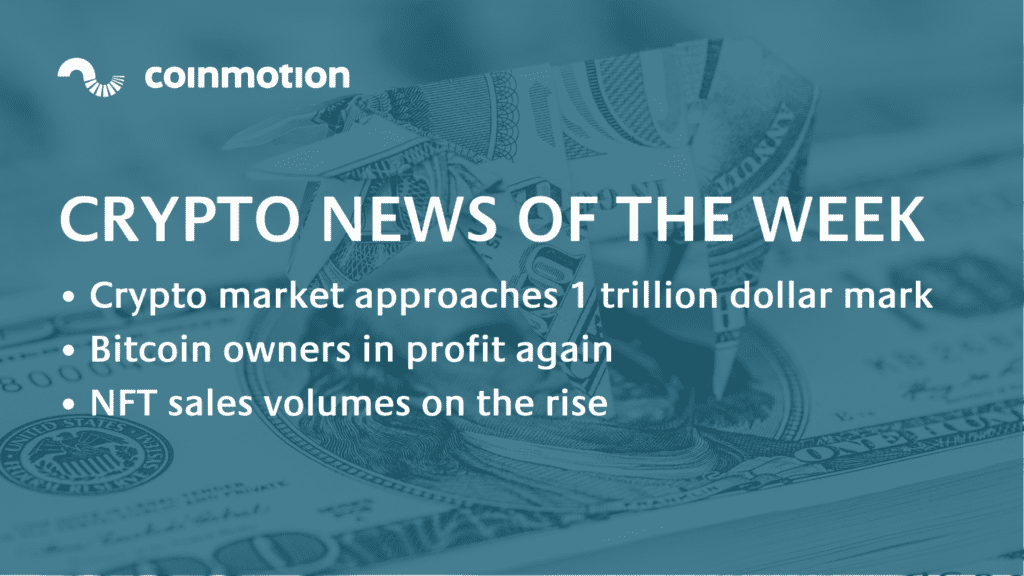 Crypto weekly / Inflation is slowing & the crypto market is rising

Inflation is slowing & the crypto market is rising

The crypto year 2023 has kicked off to a great start. Investors have enjoyed a pleasant price increase after a long time, Bitcoin holders’ investments have become profitable again, and companies are showing great interest in blockchain technology. Even the NFT market has taken a positive turn.

Read what the crypto community is talking about right now.

The crypto market is approaching a trillion dollars

The year 2023 in the crypto market has started with very positive signs. Bitcoin has risen rapidly to over $21,000. In January, there has been an increase of up to 30 percent.

Bitcoin also approached a 10-year record for consecutive green days. The price of Bitcoin rose for 12 days in a row. The record is from 2013 when the price increased 15 days in a row.

Bitcoin’s price development is known to control the entire crypto market, and with the recent rise, the market sentiment has even become slightly bullish. Many altcoins have risen by tens of percent during January.

At the same time, the value of the entire crypto market is approaching a trillion dollars. The market capitalization has never stayed below a trillion dollars for this long since the historical threshold was first reached in January 2021. The bottom was in November last year when the market briefly traded below a $780 billion valuation.

December was the sixth consecutive month of slowing inflation in the United States, but it’s still far from the US central bank’s goal of two percent. Inflation peaked at nine percent in June.

The mini bull market may also be influenced by speculation that the US central bank may end the restrictions on the economy made in the early stages of 2023. The actions of the United States significantly impact the global economy, which is also reflected in the cryptocurrency market.

The new data tells us that Bitcoin holders are returning profitable again. The value of Bitcoin has risen since the beginning of the year, and the market has experienced a surprising upwards trend despite the bear market.

Bitcoin is again in investors’ sights, as new inflation figures were published in the US. Slowing inflation has made Bitcoin once again an attractive investment. The growing interest was reflected in the rapid 5 % increase in price in one day.

Bitcoin seems to be in the so-called “accumulation” phase, which means that investors may buy more of it because the market appears more favorable than before. Of course, the situation is still unstable, and it is vital to assess it before investing.

Since the summer of 2022, NFT sales volume had decreased every month. The recent increase changed the situation, and the total sales volume rose to 549 million US dollars in December.

Although the market was not doing very well, NFTs saw some promising moments during 2022. Yuga Labs’ NFT sales hit record highs over the past year, and in February WikiLeaks founder Julian Assange’s NFT was sold for $52.7 million.

The most common forms of scams in 2022

SlowMist, a company focused on blockchain security, has noted five techniques that hackers used in 2022 to defraud investors of their funds. These included corrupt browser bookmarks, telemarketing scams, and malware spread on Discord.

The company reported up to 303 different attacks based on blockchains during the year, of which 31 % were phishing or “rug pulls.” The information comes from a report published this week by SlowMist.

One of the scamming techniques was related to a program focused on managing bookmarks. By exploiting them, the fraudsters gained access to the user’s Discord account information and thereby gained access to the project owner’s account. In Discord, scammers were able to pretend to be scammed and share more links to their future victims.

In another scam, users were tricked into selling their NFTs for virtually free. On the phone, users were directed to sell NFTs according to the instructions, and the fraudster was allowed to buy NFTs on the exchange at the price he determined himself.

On Discord, on the other hand, users were falsely asked to “test” some projects and were sent a zip file. After opening the file, the program went through information from the user’s computer with the keyword “wallet” and, based on that, sent the information to the attacker. The attackers could log into the victim’s account and transfer funds based on the wallet information.

One type of scam used Metamask. You may have received an approval request from your browser that the site can access your MetaMask account. When accepted, the fraudsters could practically determine which payments you approved. Fraudsters could completely drain the account after approval.

Survey: 90% of companies plan to use blockchains

Based on a survey conducted by CasperLabs, companies plan to adopt blockchain technology in the United States, Great Britain, and China this year.

The survey was answered by 603 decision-makers from different companies. According to the study, up to 90 percent of the responding companies have adopted blockchain technology at some level, and 87 percent plan to invest in cryptocurrencies this year.

Even though the cryptocurrency market has been in a downward spiral, companies have nevertheless sought help from the benefits brought by blockchains. CasperLabs representative Ralf Kubli says it is very encouraging to see companies understanding blockchains and the solutions they bring, not just thinking of them as a competitive element.

The biggest obstacles to utilizing blockchains were seen as insufficient training of software developers, lack of tools, compatibility with other programs, and cynicism towards the industry.

Lack of knowledge has long been an obstacle to the development of blockchains. Many companies have developed their own resources to support learning. At Coinmotion, we also offer versatile content for new crypto investors as well as more experienced connoisseurs. Read all our content on the blog!

What is Blockchain in plain English?