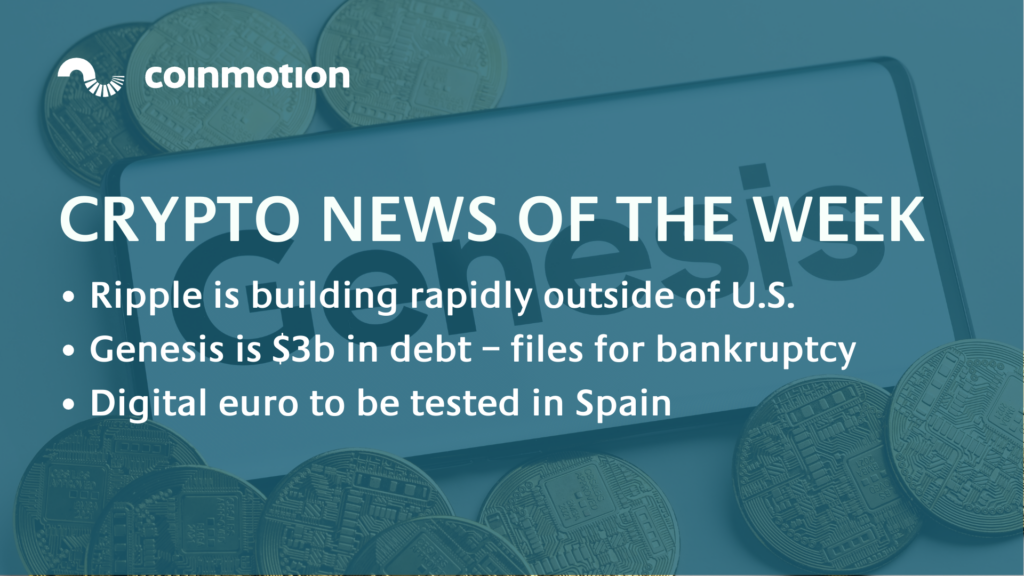 Another week has passed, and the crypto market is slightly bullish. In addition to crypto charts, investors’ confidence in crypto is also rising.

However, the week wasn’t just speculation about a possible trend reversal. During the week, the community has been discussing the bankruptcies caused by the bear market, the Ripple v. SEC trial, and the digital euro.

Crypto week in a nutshell:

Ripple is building fast despite the SEC confusion

Brooks Entwistle, Ripple’s head of global customer success, says that the company is rapidly expanding its core business outside the United States.

According to Entwistle, global opportunities are the driver for Ripple’s expansion. He says that the ongoing regulatory challenges in the United States do not yet affect the growth plans.

Ripple’s plans suggest that the company intends to reduce its dependence on the US market. Cryptocurrencies move in an uncharted area in the United States, and the direction of regulation is still uncertain. The lawsuit between Ripple and the SEC has also definitely played a role in the growth plans.

Entwistle notes that Ripple is focused on crypto-friendly markets and works with several regulators globally. Ripple also hopes that US regulators will cooperate.

The lengthy lawsuit between Ripple and the SEC is nearing its end. The legal dispute began when the SEC claimed that the issuance and sale of Ripple’s XRP tokens constituted an unregistered securities offering.

Ripple has denied the claim, saying that the XRP token should not be interpreted as an investment contract. It is used in Ripple’s business to facilitate cross-border payments between banks and other financial institutions.

Ripple’s CEO Brad Garlinghouse believes that the lawsuit will be resolved this year, possibly already during H1. The outcome of the legal battle – which will decide whether XRP is a security – will significantly impact Ripple and the entire crypto market.

Both parties presented their final positions in December and are awaiting the final verdict. The date of the ruling has yet to be discovered.

While Entwistle is confident in Ripple’s position and that the company has done everything it can, Ripple has been unhappy with the SEC’s actions, calling it an embarrassment.

The bear market has claimed yet another victim. After many months of persistence, Genesis, a company focused on crypto lending and investing, has filed for bankruptcy.

Genesis Global Holdco starts marketing and selling the company’s shares. The goal is to pay the receivables back to the creditors. If not enough funds can be collected, the creditors will receive company shares from the reorganized company.

Rumors about Genesis bankruptcy were circulating on the Internet for several days before the news. News revealed that Genesis owed more than 3 billion dollars, of which 900 million belonged to customers of Gemini and more than 300 million to the Dutch Bitvavo.

After the FTX collapse, Genesis announced that it would stop issuing new loans. Large withdrawals had exceeded the company’s current liquidity. After the announcement, Genesis applied for an emergency loan of one billion dollars.

Genesis owes 340,000 customers who participated in their investment program. The founders demanded the resignation of the CEO of Digital Currency Group, the owner of Genesis.

Digital Currency Group is a private equity firm focused on the digital currency market. It has more than 160 companies in its portfolio, of which it has bought 28 outright. The company’s most significant holdings are CoinDesk, Grayscale, and Genesis.

The Central Bank of Spain starts testing the digital euro

The Bank of Spain has approved testing the digital euro (EURM). The project is done together with the Spanish fintech company Monei.

The project will be in test use only for a small number of participants. The project lasts 12 months, after which the Bank of Spain can decide whether to adopt the digital euro.

Unlike other stablecoins, the digital euro is supposed to be able to be controlled as “programmed money.” The idea is that tokens could be coded for specific situations.

The bank would like to prevent overdraft fees for its users and manage where the funds can be used. In such a situation, the bank could determine that certain types of services or products cannot be purchased with the digital euro.

The features in question could be helpful for end users, but on the other hand, programmed money arouses criticism in terms of limiting the use of money.

CBDCs have been discussed for years, and the moment is approaching when development in this area begins taking place in Europe.

Although cryptocurrencies suffered several crises in 2022, their popularity increased in investors’ eyes. According to a survey by eToro, the share of investors owning cryptos rose from 36 % to 39 % globally last year.

The data tells about changes among investors of different ages. The number of crypto investors between the ages of 35 and 54 increased by 5 percent, which means that the interest of older investors is increasing.

There were many reasons for the increase in interest. 37% of the respondents said they want a higher interest rate on their investments, and 43% said they believe in the possibilities of blockchains in the future.

The number of NFT transactions increased during 2022

Although sales in dollars decreased, there was a vast amount of NFT purchases over the past year.

According to a report by DappRadar, there were 101 million transactions in 2022. The number increased by 67 % compared to the previous year.

Ethereum remains the most popular NFT platform. 21 % of the transactions were executed on Ethereum. The next ones were Wax (14.5 million), Polygon (13.3 million), and Solana (12.9 million).

Although there is no specific reason for the price increase, investors speculate that Trump is coming back on social media. Trump was banned from Facebook and Twitter earlier in 2022.

Trump released his collection in December, and 45,000 pieces of NFTs depicted Trump, e.g., as a cowboy, superhero, or astronaut. Some NFTs had a rare utility feature that entitled the investor to a private dinner or a meeting with a former president.

Despite their widespread criticism, NFTs sold out in less than 24 hours. 1,000 pieces were set aside for other purposes. A few days later, the set-aside collectibles were selling for $1,000 worth when Saturday Night Live covered the issue. The Trump Digital Trading Cards NFT collection is for sale on the Opensea platform.

0 Comments
Inline Feedbacks
View all comments
PrevPreviousInflation is slowing & the crypto market is rising
NextTechnical Analysis: Will The FOMO Rally Continue?Next
Sign up