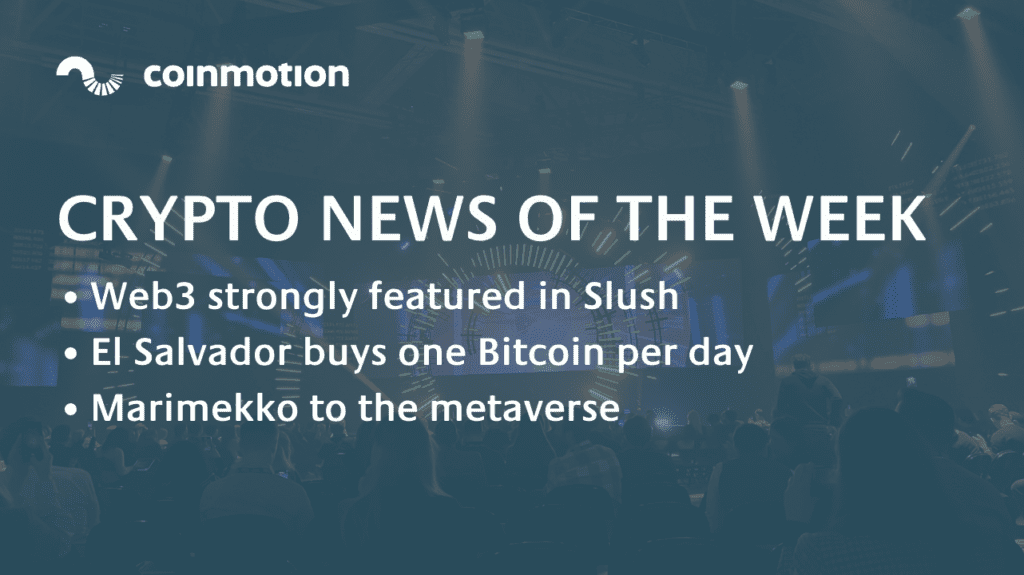 The past week was significant for the Finnish crypto community. Web3 was strongly represented at Slush, and we also received great news about Marimekko’s virtual ventures.

The international community continued to discuss the aftermath of the FTX crash, El Salvador’s new Bitcoin purchase tactic, and the freezing crypto winter.

Slush brought the Web3 world together

The world’s largest startup event, Slush, was organized last weekend at the Helsinki Messukeskus. Slush’s theme changes every year, and this year it was Web3’s turn. According to the theme, Slush’s tickets were in NFT format.

Before the main event that started on Thursday, several Web3 side events were organized in Helsinki throughout the week. In Epicenter, Web3 Builders discussed regulation, Equilibrium’s OGs & Frens event gathered both the Finnish and international community to network, and Aave’s Stani Kulechov took over Pörssitalo in front of 100 people from the industry.

The side events covered topics such as blockchain technology, DeFi, and NFT technology, as well as other Web3-related issues. They also attracted the attention of the Finnish media.

Web3 was also prominently displayed at the main event itself. During the two-day show, several startups and key figures in the industry took the stage to talk about technology, regulation, community, and, of course, the future of the industry.

Even though the event took place in the middle of a bear market, the impact of which could be heard in the speakers’ voices, their faith in the industry remained unshaken.

On Thursday, Timmu Tõke, CEO of Estonian Ready Player Me, and Sebastien Borget, founder of The Sandbox, stepped onto the biggest stage of the event, the Founders Stage.

The panel was one of the most popular at the event, and there weren’t enough seats for everyone who wanted to.

The duo talked about the history of their companies and how they originally got their business ideas. They were aware that raising funding is currently a bit more difficult than before, but they unanimously stated at the end of the speech that the building will continue.

In 2019, CoinShares Strategy Director Meltem Deminors appeared at Slush. He said in his speech already back then that cryptocurrencies are the future, but not until they gain people’s trust.

Making it to the main theme of Slush is one more step towards trust and ever-growing mass adoption. We will get over the bear market sooner or later.

The President of El Salvador has announced that the country will resume buying Bitcoin again. In his latest tweet, President Nayib Bukele said that El Salvador will buy one Bitcoin every day. The duration of Bitcoin purchases has not been made public.

President Nayib Bukele has been a really big proponent of Bitcoin. Bukele believes that Bitcoin is good for the state economy. The state has continued its Bitcoin purchases even though the World Bank and the International Monetary Fund have warned about it many times.

The ambitious plans have caused El Salvador’s credit rating to be downgraded by major risk analysis firms. The credit risk company Fitch estimates that El Salvador will no longer be able to pay back the interest on its loans in January 2023. Also, growing inflation and the economic situation weaken the possibility of repayment of loans even more.

Marimekko to the metaverse

The Finnish, world-renowned clothing brand Marimekko has jumped into the metaverse, like many other fashion houses. Marimekko has published about joining metaverse on its website and LinkedIn.

The company has partnered with Decentraland. Decentraland is a virtual world running on top of Ethereum, where users and organizations can buy their own plots of land and create digital content in a completely new way.

Marimekko says on its account that customers can walk in a virtual world through a field of flowers filled with Marimekko patterns. Marimekko presented its virtual world decorated in Decentraland at the Slush event in Helsinki.

Marimekko’s Decentraland world can be explored through the company’s website.

The aftermath of the FTX crash

We have reported on the stages of the collapse of the crypto exchange FTX in the previous weeks. The dust has slowly settled, but the episode is far from over.

FTX has been closely investigated by lawyers, researchers, and supervisors. Different parties are investigating the collapse of the crypto market and trying to find the reasons why such a disaster happened. It is speculated that serious consequences await the individuals who were involved in the operation of FTX. The magnitude of the consequences depends on the results of the investigation.

FTX filed for bankruptcy last Friday. The bankruptcy petition was filed a few days after the company stopped withdrawing funds from its stock exchange. A little less than a week before, Coindesk released a report stating that another SBF-owned company, Alameda Research, has a very large holding of FTT tokens.

When Bankman-Fried was asked about the subject, he said that everything was “just fine.” Bankman-Fried also tweeted that FTX has enough reserves for all customers’ funds and that the speculations were just rumors from a competitor. The truth came through the market reaction.

Various officials in America have said that FTX is an example of digital currencies’ weaknesses, as well as how big the risks have grown around them.

Apple is moving towards augmented reality

Apple seems to be moving rapidly towards AR if you look at the company’s recent job announcements. The technology giant is looking for several engineers with requirements in augmented reality and virtual reality know-how.

Since the first day of November, more than 30 related jobs have been listed on Apple’s jobs page. The company is looking for engineers for both application development and device development.

Even though the company has more than 150 different jobs open, one of the job advertisements from last August attracts attention. The job description says that the selected person will build tools and environments that can be used to create experiences in the world of augmented reality.

There have been some rumors circulating on the Internet that Apple’s virtual glasses will be assembled by a Taiwanese company at the beginning of next year. Currently, Apple uses the company to manufacture the iPhone 14.

There have also been various investigations into the fact that within a few years, Apple would have filed various trademark applications related to the subject. For example, a haptic glove with which you can experience the physical side of virtual worlds.

Apple’s CEO Tim Cook has been asked if Apple will move to the metaverse, and the answer has been that the company sees a lot of potential in the metaverse and is investing in it accordingly.

Crypto winter can continue until the end of 2023

Recent news about the situation of FTX may extend the crypto bear market even further. Many exchanges were involved with the exchange, either in the form of loans or other activities.

Due to the FTX crash, the crypto market has been on the verge of a liquidity crisis, and many investors have lost faith in cryptocurrencies. Many experts believe that the market decline can easily continue until the end of next year.

Coinbase’s new analysis says that the FTX crash could have had a really negative impact on the entire crypto market. Many large investors had their funds stuck in the exchange after it filed for bankruptcy, which weakened investors’ faith in cryptos.

Stablecoin dominance is at an all-time high. Source: Coinbase.

Although the extent of the damage has probably been limited within FTX after it filed for bankruptcy, there is still a possibility of a so-called snowball effect in the crypto market. Many exchanges or companies have cooperated with FTX and do not get their funds back.

Many exchanges have already announced that due to the uncertainty of the market, they are limiting the ability of users to withdraw their funds from the accounts of the exchanges. Only time will tell what will happen.