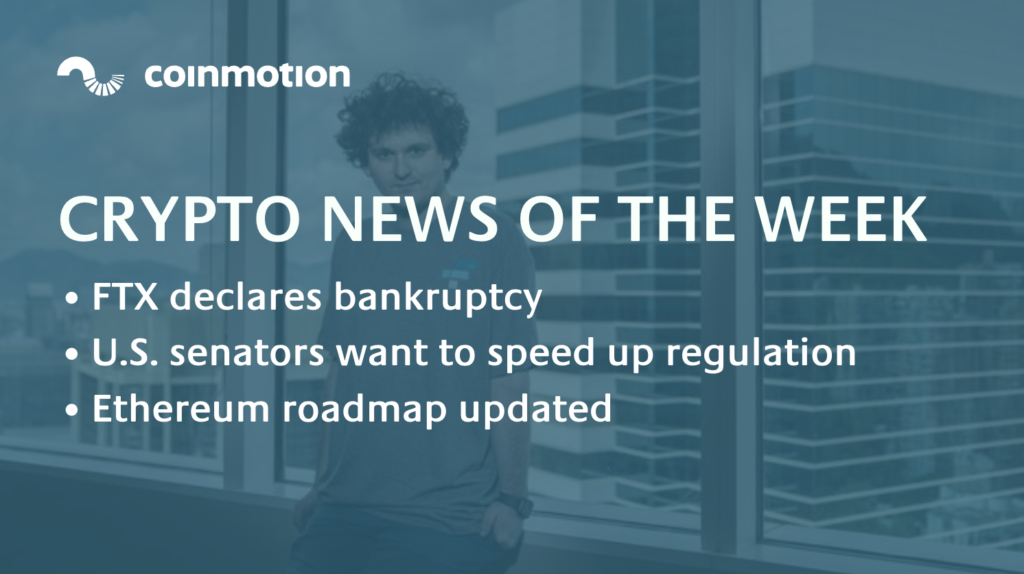 The crypto market is going through a difficult phase, but there is also a positive side to it. The events of last week were so extraordinary that many believe that a Netflix documentary or movie about it is already in the works.

The collapse of Sam Bankman-Fried’s empire was by far the most talked about topic of the week. The news rocked the crypto world, and the market turned down because of it.

What exactly happened to FTX? What does the crash mean for the future of the crypto market? Here are the most talked-about news of the week.

FTX, one of the world’s largest crypto exchanges, collapsed and filed for bankruptcy last week after an incredible series of events. Another company owned by Sam Bankman-Fried, Alameda Research, collapsed in the same crash.

This is perhaps the biggest crash in crypto history. The event has been called the Lehman Brothers of the crypto world. Lehman was one of the biggest banks to fail during the 2008 financial crisis. But like the global economy back then, the crypto market will survive.

The destruction of FTX is only rivaled by the hacking of Mt Gox in 2014 and the collapse of Terra Luna earlier this year.

But what happened to FTX? In October, its valuation was over 30 billion dollars, and it served hundreds of thousands of customers.

The fast-paced series of events started on November 2, when Alameda Research’s balance sheet for the year was made public. According to a CoinDesk article, most of Alameda’s funds were tied up in the FTT token, which is FTX’s own cryptocurrency. We reported on the topic last week.

Speculation began to spread on Twitter about the relationship between Alameda and FTX. It seemed that behind the scenes, the funds of FTX users had ended up in Alameda’s possession. In other words, it looked threateningly like FTX was insolvent.

Crypto exchange Binance previously owned a portion of FTX, and in light of the revelation, its CEO CZ announced on November 6 that the company plans to sell all of its remaining FTT tokens that it had received from the sale. Binance had an estimated $580 million worth of FTT.

After the announcement, FTX’s customers quickly started selling FTT, fearing selling pressure and a falling price. At the same time, investors pulled $6 billion from the service after hearing rumors that customers’ investments were not 100 percent guaranteed.

Because of the bank run, FTX was almost in a liquidity crisis – it couldn’t pay all the customers withdrawing their funds, so it stopped the withdrawals. Then the news bomb dropped: FTX was in such a bad crisis that it had asked Binance for help. Both CZ and SBF announced that Binance planned to acquire FTX.

After the chaos of the FTX exchange, the value of the exchange’s own cryptocurrency FTT fell by almost 80% in a day. More than 8 billion dollars disappeared from the market value during the day. This led to chaos throughout the crypto market. The value of the biggest of them all, Bitcoin, fell by as much as 14 %.

But that’s not all. Less than a day later, Binance announced it was pulling out of the deal after massive holes in FTX’s accounting were revealed.

On Friday 11.11. Sam Bankman-Fried announced that FTX and Alameda have filed for bankruptcy. To top off the fiasco, just hours after filing for bankruptcy, FTX was reportedly hacked for nearly $600 million.

What is the FTX exchange?

FTX was a Bahamas-based cryptocurrency exchange that was founded in 2019. In February 2022, the exchange already had more than a million users. The founders of the company were the well-known billionaire Sam Bankman-Fried and his partner Gary Wang.

FTX quickly grew in a few years to become a crypto exchange worth more than 30 billion dollars. Billions of dollars were traded daily on FTX. FTX’s customers included small and large trading companies and individual investors.

Binance CEO CZ bought a 20 percent stake in the FTX company half a year after it was founded. FTX’s journey was wild, and a lot happened in a few years.

FTX raised funding from different VCs, and, among other things, during this year, the crypto exchange saved another company from the brink of bankruptcy by buying it for itself at a cheap price. In the end, FTX found itself in a similar situation; the company’s value had dropped significantly, and it filed for bankruptcy.

Who is Sam Bankman-Fried?

Sam Bankman-Fried, aka SBF, was one of the richest people in the crypto world thanks to the FTX exchange and the trading company Alameda Research he founded. He is a 30-year-old American entrepreneur.

At his peak, Bankman-Fried’s fortune was reported to be over $15 billion, and he was on Forbes’ list of the world’s 100 richest people. According to the data, almost 95% of Bankman-Fried’s assets had melted in a day with the FTX collapse.

Sam Bankman-Fried was still considered the golden boy of the crypto world in the fall of 2022. He was a popular and admired figure in the community. He first started getting negative publicity when he talked about how cryptocurrencies need strict regulation.

Bankman-Fried’s reputation was completely destroyed when questionable information about the misuse of customer funds was found between FTX and Alameda. Hundreds of thousands of FTX users are still waiting to withdraw their funds from the service. Many believe that SBF is to blame for the whole collapse.

The collapse of FTX accelerates the development of regulation

The USA is one of the most central countries in terms of cryptocurrency legislation. After the collapse of the FTX exchange, US senators have wanted to speed up the development of regulation related to cryptocurrencies.

“It is time for Congress to act. The Committee remains committed to advancing the Digital Commodities Consumer Protection Act to bring necessary safeguards to the digital commodities market,” said Senator Debbie Steabenow.

Many other senators have also expressed concerns about the development of cryptocurrencies in light of recent events. Senators fear that the collapse of the crypto market will make everyday life difficult for every American, even if they are not investors.

Legislation preparations will probably be accelerated, which in the long run is only a good thing for the market. When the legislation is clear, unclear legal battles will decrease, and the market situation will level out.

The past few days have been really wild for the crypto market. The collapse of FTX also caused the price of Bitcoin to fall, and its price was at its lowest level in the last two years.

Bitcoin wasn’t the only cryptocurrency to drop in value. In practice, the entire market and various altcoins experienced a drop of tens of percent. A big reason for the decline in the value of cryptocurrencies was the previously mentioned FTX crypto exchange and the panic it caused.

Before the collapse, the market situation seemed neutral, and there was a lot of positive news, but the volatile crypto market showed again that anything can happen. For example, Ethereum fell from 1600 dollars to about 1100 dollars, and many other cryptocurrencies lost a lot of their value.

In a few days, hundreds of billions of dollars disappeared from the value of the crypto market. The FTX drama has swept the crypto market like a tsunami, and only time will tell how far the consequences will go.

How long will the bear market last?

Bitcoin’s halving is seen as one of the most important price drivers in the market, as other cryptocurrencies are strongly correlated to Bitcoin’s rate. The previous Bitcoin mining fee halving took place in 2020. From then on, the cryptocurrency market continued to skyrocket until the end of 2021.

The crypto market has been in decline since the end of 2021, except for a few positive weeks. During 2022, the market has been affected by numerous issues, such as the war in Ukraine, the global energy crisis, and record-high inflation.

The past autumn was already showing positive signs until the collapse of FTX. The crypto market is likely to have more new losers in the coming months, as the collapse of major exchanges always affects many other companies as well.

In September, the long-awaited Merge update was made to the Ethereum blockchain and it was successfully completed. Now the list of new updates to the network, i.e. the roadmap, has been continued.

The already-made Ethereum network updates The Merge, The Surge, The Verge, The Purge, and The Splurge got a new sequel, The Scourge.

The new update, “The Scourge,” was announced in a Twitter post by Vitalik Buterin on November 5th. Its idea is to improve the resistance to censorship and the decentralization of the Ethereum network.

In some situations, certain miners may have had time to make blocks faster than other entities maintaining the network. Then they have been able to decide in which order the transactions will be added to the blockchain.

The new functionality has not been specified in detail, but in one example, it could be limited to what information miners can add to the blockchain independently. In this way, the Ethereum network could not be exploited.