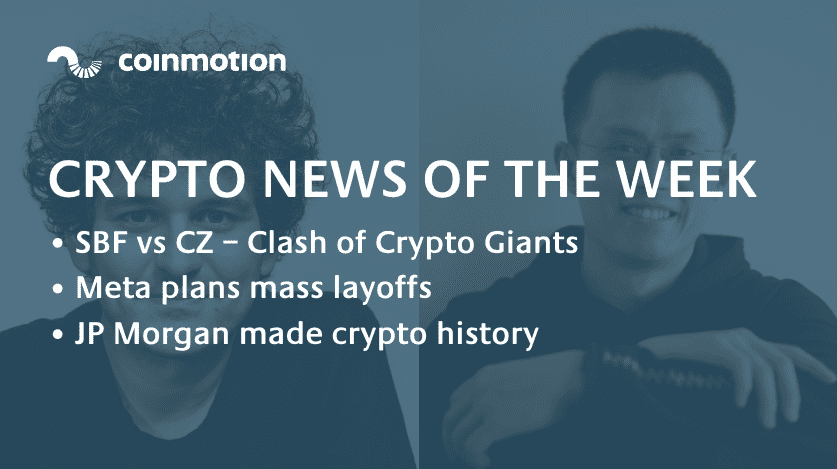 The crypto world is in the grip of a bear market, and naturally, there’s a lot of drama. Investors are now focused on the clash of two crypto giants: Binance and FTX.

Meta announced they are planning mass layoffs, but will it affect the metaverse ventures?

On top of internal challenges, there are some complications coming from outside the market, as the FED is raising the interest rates once again to fight inflation.

SBF vs CZ – The Clash of Crypto Giants

There’s a storm brewing between two major crypto exchanges: FTX and Binance. More specifically, the fuss is about the CEOs.

Binance CEO Changpeng “CZ” Zhao announced that the company plans to liquidate all of its assets held in FTT, the native token of the FTX exchange.

Zhao did not say exactly how much Binance is selling FTT tokens but said it will sell all the remaining tokens on the company’s balance sheet. Binance received $2.1 billion in stablecoins and FTT last year when it sold its stake in the FTX exchange.

CZ says in his tweet that the decision is due to “recent revelations,” by which he probably refers to the recently leaked balance sheet of Alameda Research, according to which Alameda’s assets are tied to the token of the FTX exchange for billions of dollars. Both Alameda and FTX are companies founded by crypto billionaire Sam Bankman-Fried, who has recently received negative publicity.

Since Binance is holding a significant amount of FTT tokens, Binance could cause panic and a price crash by selling them all at once. Zhao added that Binance will try to minimize market impact and sell tokens slowly over months.

A popular Twitter account tracking the transactions of major crypto holders announced that $584 million worth of FTT tokens were transferred to Binance. Zhao confirmed it was part of the liquidation process.

Meta made billions of dollars in losses – plans mass layoffs

The metaverse-developing social media and technology giant Meta is preparing for major layoffs. This would be the first large-scale staff reduction in the company’s 18-year history.

The plans are due to rising costs, a drastically loss-making Reality Labs division, and a collapse of more than 70 percent in the share price.

Meta currently has 87,000 employees, most of whom are in the Reality Labs division. Reality Labs is responsible for the development of the metaverse and is by far Meta’s largest single expenditure. The division posted losses of $3.7 billion in the third quarter, pushing the metaverse project’s losses to nearly $10 billion in 2022.

According to Meta CEO Mark Zuckerberg, the company plans to focus its attention on the most important growth areas, such as the Discovery Engine AI and the metaverse.

It is not yet known if Reality Labs employees will be laid off. According to the list of open jobs, Meta is currently recruiting 38 new employees for VR and AR projects, so one could assume that the company is not slowing down the development of the metaverse.

The transaction was part of a pilot program exploring the possibilities of DeFi in financial markets. In other words, the pilot was a step towards tokenized financial instruments. In the future, traditional financial institutions will be able to use tokenized instruments in trading and other services.

The payment transaction was made using the Aave protocol smart contract. Aave is one of the largest DeFi lending services in the world, founded by Finnish Stani Kulechov.

They used tokenized Singapore dollar and Japanese yen deposits and tested the buying and selling of tokenized government bonds.

The project was officially launched in May 2022, a month after JP Morgan and Singapore’s largest bank DBS announced the collaboration. The idea of ​​the collaboration was to build a blockchain-based platform that could facilitate and help the use of central banks’ digital currencies.

The project is a major milestone for large institutions operating in the financial sector. The financial industry is expected to grow, and the real world’s wealth is expected to be tokenized into blockchains in large quantities. According to one estimate, the value of tokenized instruments will reach $16.1 trillion by 2030.

In addition to the FTX episode, Changpeng “CZ” Zhao was also in other news this week. He says that there is room in the world for both cryptocurrencies and central bank digital currencies, or CBDCs, and they are not mutually exclusive.

Digital currencies from central banks would bring reliability to blockchain technology and improve the image of crypto-skeptics regarding cryptocurrencies and new developments. CZ believes the more cryptocurrency technology there is, the better it is for everyone.

Last year, CZ said otherwise. He said that the digital currencies of central banks would never bring the same freedom as the traditional cryptocurrencies we know, such as Ethereum or Bitcoin.

Many different central banks have developed their own digital currency projects in recent years. The currency put into circulation by the central bank is completely under the control of the central bank. This has scared many crypto influencers and caused a reflection: is the direction wrong when the idea of ​​cryptocurrencies is to eliminate unnecessary middlemen?

At least 15 different countries are currently planning their own digital currencies. These include China, Kazakhstan, Thailand, Saudi Arabia, Sweden, South Africa, and Russia. Some are already further along, and, for example, Nigeria and Jamaica have taken projects to the implementation stage.

The FED raises interest rates again. The United States is one of the world’s economic powers, so its monetary policy also strongly guides the actions of the ECB and other central banks. The decisions made by the FED are quickly reflected in Finland as well.

The increase in interest rates also affects the cryptocurrency market. When interest rates on loans rise, people have less money to spend. Investing, especially in cryptos, will decrease in quantity as the use of money is prioritized above all for expenses that are important for living.

Interest rates were raised by 0.75 percentage points, with the key rate now being 3.75 to 4 percent. This is the fourth consecutive increase in interest rates, the aim of which is to contain record-high inflation. Consumer product prices have risen 4 times faster than the central bank had predicted.

Crypto investors tend to follow the interest rate policy of the US Federal Reserve as it has a strong impact on global markets such as stocks and cryptos.

According to some comments, this should be the last rate hike. An excessive increase in interest rates can put the economy in a very bad situation.

Arweave has announced a collaboration with Meta. Instagram users can make NFT tokens from their posts, which can be deposited on Arweave’s blockchain. After publishing the collaboration, the price of Arweave’s AR cryptocurrency increased by up to 60% within a day.

There are a few different tools being released to Instagram that allow creators to make and sell different NFT collectibles directly within Instagram. Meta’s idea is also to give users the opportunity to present their own NFT tokens, for example, in the form of videos.

The tools work on Polygon’s blockchain, and the idea is to expand the functionality to Solana’s and Fantom’s blockchains as well.

Development steps outside of blockchains are also implemented. In the future, you can make donations to reels videos on Instagram. The feature allows users to reward creators for valuable content. The idea is to give content producers ways to monetize their content.

The volume of NFT sales is down and shows no signs of recovery. As a whole, the NFT volume has collapsed by up to 25 percent between October and November. Although new NFT projects are constantly being announced, the sales volume of tokens is in a drastic decline.

DappRadar’s data ignores a type of fraudulent transactions. Some people sell NFT tokens at a high price between their own wallets, making the price and volume appear higher than they actually are. This phenomenon is called ‘wash trading’.