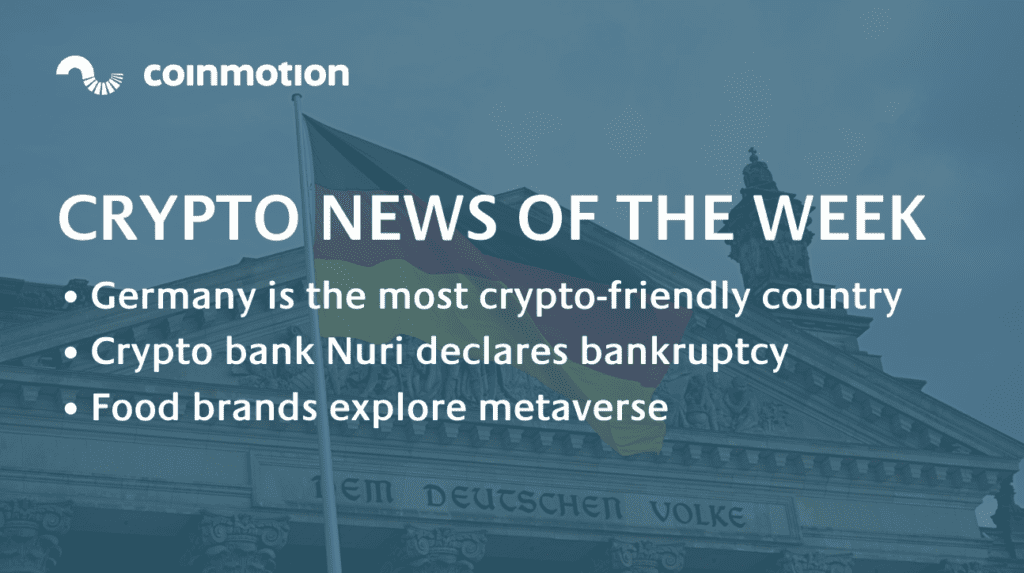 Cryptocurrency prices are going sideways, but there is a lot going on behind the scenes. The most discussed crypto topics of the week dealt with the world’s largest crypto economies, food brand metaverse experiments, and the difficulties of the German crypto bank Nuri.

Inflation and the global economic situation were also some of the hot topics once again.

Germany has become the world’s most crypto-friendly economy in the third quarter of 2022. The United States, which previously held joint first place with Germany, has fallen to seventh place on the list

Coincub lists the most crypto-positive economies based on various data. This is affected by taxation and official communication.

Germany is not a tax-free crypto-economy, but compared to more traditional taxation countries, it is a really strong and versatile competitor in the eyes of investors.

For example, an entity that holds cryptocurrency for a longer period receives tax benefits. In Germany, you do not pay tax if you have held the crypto for more than a year before the sale.

Switzerland came in second on the list, and its crypto favorability is also strongly reflected in innovations. For example, McDonald’s in Lugano recently introduced Bitcoin payments in its restaurant. Many cryptocurrency companies are also headquartered in Switzerland. Australia, the United Arab Emirates, and Singapore came next on the list.

German crypto bank Nuri has informed its 500,000 users that they should withdraw their funds from the bank. The company’s operations are planned to be closed at the end of this year.

Nuri’s crypto services will still be in operation until the end of November, but after that, the company will aim to liquidate its business, which will again bring a new victim to the current bear market.

Nuri announced its liquidity problems for the first time in August. The company tried to plan a reorganization of its business without success. However, users have been informed well in advance that they have the opportunity to withdraw their reserves by December.

Nuri’s CEO said in a customer letter that the problems were caused by the bad economic situation and the political environment. The situation was worsened by one of Nuri’s main partners. The partner was not named, but it is reasonable to assume that it was the infamous crypto-lending service Celsius.

Celsius had partnered with Nuri in the past to offer a Bitcoin interest-bearing account, and at the time of Celsius’ bankruptcy, those accounts were frozen.

Nuri users can withdraw their funds to Coinmotion

Nuri encourages its 500 000 customers to withdraw funds as soon as possible. If you have funds at Nuri’s platform and want to transfer them into a secure crypto service, you can easily withdraw them to Coinmotion.

Read how to withdraw funds to Coinmotion:

Large food brands have started acquiring trademarks for their products, which heralds the expansion of companies into the metaverse in the form of virtual drinks, food, and restaurant services.

We reported earlier that the number of trademark applications has been on the rise during the past year. More and more companies are developing their operations in the digital market, and no one wants to miss out.

Why do food brands want to go to the metaverse?

Interest in virtual worlds has been growing recently. Developing technology gives companies opportunities to develop and expand their business.

New activities and ways of spending time are constantly being developed in virtual worlds. However, it’s not just about spending time – metaverses enable new ways of learning, organizing social events, and shopping.

In the future, food brands can participate in the metaverse to promote their own business. If the requirement of the virtual world is to “feed” the avatar at certain intervals, it creates a demand for digital food and, thus, for the brands’ products.

It might sound a bit absurd, but you can look for an example in video games. In Grand Theft Auto games, the character needs to eat and drink to get energy. Food can be bought from in-game restaurants or shops. Metaverse takes this idea to the next level.

A delay of almost 90 minutes on the Bitcoin blockchain

The Bitcoin blockchain experienced a rare delay, with investors having to wait over an hour for a new block to be successfully added to the blockchain. Normally, new blocks are created every 10 minutes on average.

According to Mempool, there was an 85-minute break between blocks, during which up to 13,000 transactions piled up on the chain waiting for confirmation. Meaning: not a single transaction went through for almost 1.5 hours.

The event was the result of a change in Bitcoin mining difficulty. Last week we reported that the Bitcoin network has historically high levels of mining power, which means the network is more secure than ever before.

A feature programmed into Bitcoin’s code automatically changes the mining difficulty every two weeks according to the mining power. Its purpose is to keep the block creation rate constant at around 10 minutes so that new Bitcoins are generated at a predictable rate. The more miners there are online, the more difficult mining becomes, and vice versa.

As the mining power rose to a new record, the difficulty also rose to peak numbers the other week. So mining Bitcoin is now record expensive. The constantly rising price of electricity and the downturn in the crypto market have been a pain for the miners. Their businesses are taking losses at the moment, so many have had to sell their old Bitcoins to finance their operations.

If the price of energy continues to rise and the price of Bitcoin does not rise, the mining difficulty is expected to level off in the near future.

Inflation in England is already over 10 percent

The prices of products in England continue to rise. As a result, England’s inflation has set a new inflation record in a period of 40 years, when the reading already rose to 10.1 percent.

During the last months, the trading volume of the British pound has increased on various exchanges, and the value of the pound was close to the value of the American dollar just before the Bank of England decided to issue more money.

Many crypto players in England have been talking about how inflation is only going to get worse, and Bitcoin is the solution to slow it down. In return, several politicians say that things are not under their control.

Capital Economics’ chief economist Paul Dales has commented that England should get used to rising prices. He believes that the inflation level will remain in double digits well into the new year.

South Korea plans to introduce a digital identity card by 2024. The identity card is protected in the blockchain, and it is possible to use it with a smartphone.

Identity recognition based on blockchains is a new technology in a constantly digitizing world. South Korea has been a pioneer of new innovations for a long time.

The idea of a digital identity card is to facilitate identification. For example, Internet activities such as applying for government benefits, transferring money, or voting could be just a click away.

“The digital identity card enables great benefits in finance, health care, taxation, movement, and many other things. It can be quickly adopted among Koreans,” says Korean economist Hwang Seogwon.

Crypto lending company Celsius has declared bankruptcy and is now under investigation in the United States in up to 40 different states. The investigation may even lead to the arrest of the previous CEO, Alex Mashinsky.

The company declared bankruptcy earlier this year, which was partly due to Terra’s collapse in the spring. Many companies were not prepared for such a sharp change in prices.

The company has been the subject of many different accusations during the year, and there are many ambiguities in the financial figures it reports. For example, a billion-dollar deficit in accounting raises a lot of questions. User accounts were frozen in June to prevent panic selling, and many investors lost their wealth. 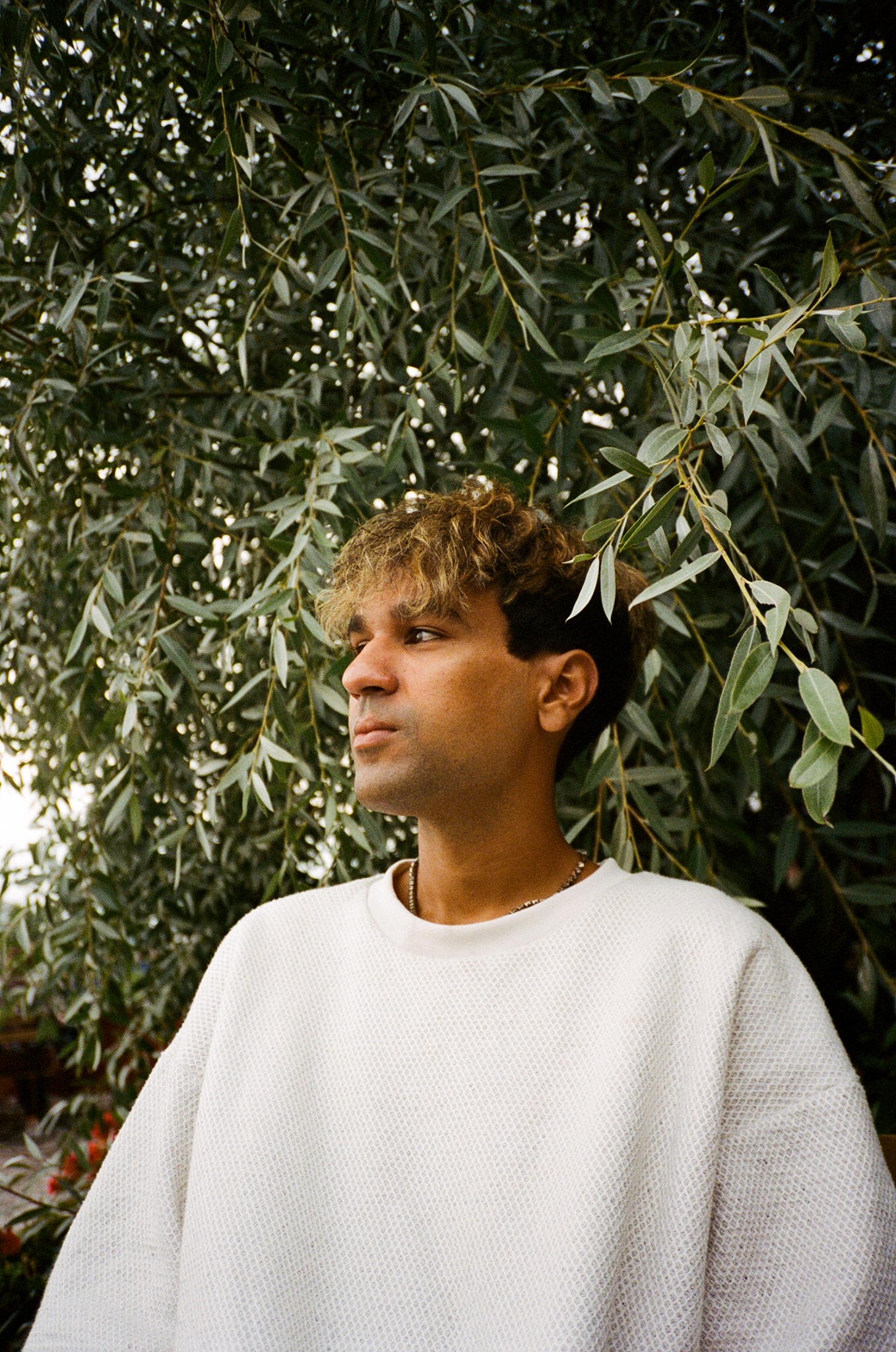 Content & SEO Specialist at Coinmotion
0 Comments
Inline Feedbacks
View all comments
PrevPreviousTechnical Analysis: Bitcoin Approaches a New Pool of Liquidity at $20K
NextUniswap is preparing for the NFT and Web3 marketsNext
Sign up