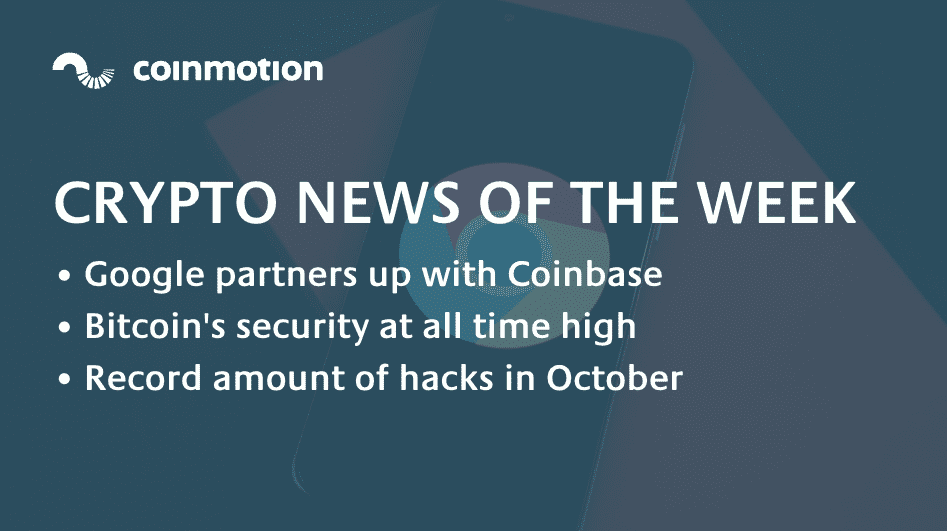 The Crypto world is buzzing about the new partnership between Google and Coinbase. In addition to the technology sector, crypto deals have also been made in the financial sector. The hot topics also include the security of Bitcoin, crypto taxation in Portugal, and the growing popularity of Web3 programming despite the bear market.

Google announced last week that it will partner with centralized crypto exchange Coinbase. The idea is to allow Google’s customers to pay for cloud services with cryptocurrencies starting in 2023. Coinbase, respectively, will begin using Google’s cloud infrastructure.

These kinds of partnerships are exactly what the crypto industry needs in order to build trust globally and accelerate mass adoption. Even though the news about the collaboration has provoked all sorts of opinions in the crypto community, the majority of feedback has been positive.

What’s interesting is how Google has changed its mind about cryptocurrencies. For almost 3 years (2018-2021), Google banned all crypto-related advertising on its platform. The latest news shows it is now, however, embracing Web3 technology.

The deal might turn out really profitable for Google. It might lure some rapidly growing businesses into Google’s ecosystem since its major competitors do not allow customers to pay in digital currencies.

Coinbase’s shares saw a minor increase in price after the announcement.

Bitcoin’s security is at an all-time high

The price of Bitcoin has fallen, but the difficulty of mining is heading in the opposite direction. The Bitcoin network now has more mining power than ever before. The mining power determines the security of the network, in other words, the network is more secure than ever.

Although the price of Bitcoin has been falling for almost the entire year 2022, the difficulty of mining is steadily increasing. It means that there are new miners coming, and interest in Bitcoin is growing.

As the mining power increases, the security of the Bitcoin network improves all the time, and the risk of the blockchain being hacked is constantly decreasing.

The increasing difficulty of mining means that miners can still earn money from mining. Equipment prices have dropped so much that it has become more affordable to start mining.

The profitability of mining is mainly determined by three factors: competition, the price of energy, and Bitcoin’s price. The price of electricity has been rising, so it affects the running costs of the mining business. At the same time, the value of Bitcoin has dropped, so the rewards received by miners in terms of euros or dollars have shrunk.

Last week Decrypt reported that Bitcoin miners’ reserves are at their lowest level in 12 years. It means that miners are forced to sell their old Bitcoins to finance the business.

Financial service giant J.P. Morgan has joined forces with VISA. Both companies have their own private blockchains. J.P. Morgan’s blockchain is called Liink, and VISA has B2B Connect.

The aim of the cooperation is to streamline cross-border payment transactions using blockchain technology. According to J.P. Morgan, the global economy suffers from failed payments of up to 118 billion dollars annually. Two-thirds of them are due to incorrect account information.

The idea behind Liink’s Confirm service is to process data and account information from 3,500 banks covering more than 2 billion accounts. In addition to correcting failed payments, payments can be monitored more closely, which enhances security.

Confirm acts as a checker of bank account information. Deutsche Bank has already announced that it will join as a founding member to guide Confirm’s strategic expansion.

It has been reported by Confirm’s management that the extent of the network affects how good results are achieved. The merger with VISA and the cooperation of Deutsche Bank will result in a wide acceleration in adoption. According to Confirm, the wider the network, the better the results.

October was a record month in terms of hacks

During October. 718 million dollars worth of cryptocurrency has already been stolen in connection with 11 different hacks. Hacks have occurred in various DeFi protocols. The number is the highest ever, even though there are still a couple of weeks left in the month.

Chainalysis has estimated that 2022 will surpass last year’s hacks in terms of money. 2021 saw a record number of hacks.

Even though the crypto market is in a downturn and less active than a year ago, hackers have still managed to hit victims’ wallets. Attacks range from various cryptocurrency transfer parties to market manipulation and outright stealing.

Up to hundreds of millions of dollars have been stolen in individual attacks focused on blockchain bridges.

On Tuesday, we saw another 100 million dollar attack on the popular Mango Markets on the Solana blockchain, where a single user was able to manipulate the prices of currencies and make a profit for himself with falsehood.

Meta’s new virtual reality glasses bring some of the Office 365 services into the virtual world. Meta CEO Mark Zuckerberg calls this “the virtual office of the future.”

Known Microsoft applications such as Word, Excel, PowerPoint, Outlook, and Sharepoint can be used with Meta’s VR glasses in the future.

With virtual reality, Microsoft Teams becomes a better service and gives people the opportunity to experience new ways to connect with each other. Meta says that they want everyone to feel that they are present, even if remote working continues.

As a result of Facebook’s name change, the company’s focus shifted to the metaverse. Meta strives to build a virtual world that is open and compatible with all systems.

The company’s metaverse projects have experienced large losses recently. That’s why building a metaverse on the scale Meta wants is not easy, and only time will tell if they succeed.

According to Mark Zuckerberg, Meta believes that its metaverse will have a billion users by 2030.

Metaverse refers to an online, 24/7, and three-dimensional virtual world that connects several different virtual spaces. Metaverse can be thought of as the next step in the development of the Internet. Metaverse allows users to work, meet each other, play, and socialize together in these three-dimensional spaces.

You can play games in the metaverse and transfer your characters and items from the game to another virtual world. You can own a virtual apartment and decorate it with digital objects like NFT art.

You can buy, for example, office space in the virtual world, where your visitors can come for a meeting. Everything happens remotely but feels real. There are many uses, but the main purpose is to bring people closer to each other without physical contact.

Currently, the closest metaverse experience is offered by video games. Video games may include elements such as in-game events, an economic system, and community activities.

Tax haven no more? – Portugal is changing the rules

Portugal has long been a dream for cryptocurrency enthusiasts due to their low tax rate. Now, however, the Portuguese government has proposed a 28 % tax on crypto sales profits. The tax would concern entities that have held cryptos in their wallets or exchanges for less than a year.

In Portugal, cryptocurrencies have not been given much weight so far. That is why Portugal has been a popular country among crypto investors. However, a proposal has now been made for next year regarding the taxation of cryptocurrencies.

However, Portugal has thought things through very well from the point of view of long-term investors. The 28 % tax would concern only cryptocurrencies that have been held for less than a year. After that, no taxes would be payable on the sale at all. The proposal also included a 4 % tax, for example, in inheritance cases.

As it is only a proposal, the law hasn’t been put into motion yet. After the vote, we will see if the law passes as it is and what will happen.

Web3 developers are active despite the bear market

The increase in the number of smart contracts and Web3 script libraries tells about the development of Web3 technology. The crypto market has been quiet for a long time, but still, the development is growing at a record speed in the background.

Web3 developers are more active than ever, especially on the Ethereum blockchain, says Alchemy, a company that specializes in Web3 analytics.

Although in 2022, the value of Ethereum has decreased by 60%, the amount of money maintained by DeFi services by 70%, and the volume of NFT trading by almost 98%, more than a third of all smart contract code has been created during 2022.

Two weeks before the Ethereum Merge, smart contract development started growing at a rate of over 10 percent, suggesting that many developers had been waiting for this moment for a long time.

The Japanese gaming giant Konami has announced numerous different jobs for the development of NFT, Web3, and Metaverse technologies. The company has started to advance its own Web3 development and is now acquiring experts for it.

Konami has said that they have done research on how they could bring the latest technology into their games and content. The company also announced that it will launch a marketplace for NFT tokens, where players can exchange digital goods from games.

Konami is famous for its game releases, which include Metal Gear Solid, Castlevania, Frogger, and Dance Dance Revolution. At the beginning of the year, the company released an NFT collection to celebrate the anniversary of the Castlevania game.

Konami is clearly investing in Web3 technology, and it’s not the only company trying to capture market share through innovation. However, many companies have backed out of their plans due to, for example, environmental problems. However, with Ethereum’s update, this may take a positive turn, as many Web3 developers use Ethereum in their work.