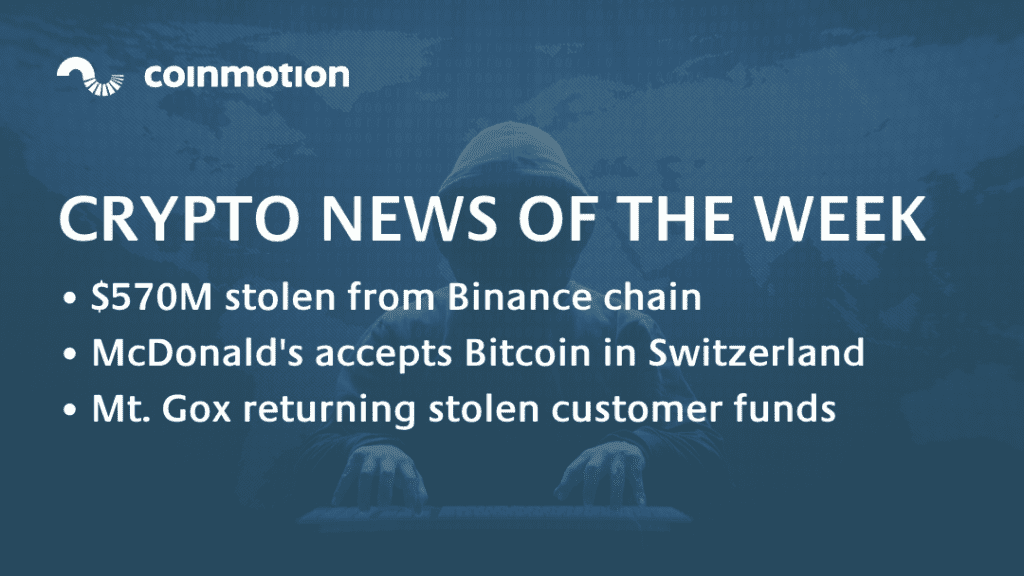 The most important topics during the week were the hacking of Binance Smart Chain, the progress of mass adoption in Switzerland, and possible refunds of the infamous crypto exchange Mt. Gox.

Binance, the world’s largest cryptocurrency exchange, confirmed that the Binance Smart Chain network was hacked as the latest in a series of attacks on several blockchain bridges.

Binance confirmed on Friday that $570 million had been stolen from its blockchain. The attack targeted Binance’s Smart Chain network, which acts as a bridge for cross-chain fund transfers. The attack exposed the weaknesses of DeFi, whose services are powered by smart contracts and code.

Binance CEO Chanpeng Zhao told CNBC in an interview that “software code is never bug-free.” He emphasized that users did not lose money in the hack, but it concerned so-called blockchain bridges, whose services are particularly vulnerable to attacks.

Blockchain research company Chainalysis estimated in August that 13 blockchain bridges have been hacked in crypto history. Estimated losses are $2 billion dollars. Most of the hacks occurred in 2022.

Recent attacks show that the operation of DeFi platforms based on smart contracts and code leaves gaps for attackers, and in the event of an emergency, the decentralized nature of services can be an obstacle to quickly solving problems.

What is Binance Chain?

Binance is a crypto exchange that was founded in 2017. It owns its own cryptocurrency, the BNB token. A couple of years after the launch of the exchange, Binance announced its own blockchain, Binance Smart Chain (BSC), which is run using BNB tokens.

The idea of ​​Binance Chain is to make BNB available to every person in the world and to build a crypto infrastructure that utilizes the entire global economy. Binance Chain provides an open and decentralized environment for developers and inventors.

By owning a Binance token, you can also vote on changes to the blockchain. The more tokens you own, the greater your voting power when new updates are proposed for release.

According to a recent study conducted in Canada, more than 30 % of Canadians plan to buy cryptocurrencies for themselves by 2024.

The Canadian Securities Commission has published information in which they declare their own neutral attitude towards cryptocurrencies and, at the same time, said that many Canadians think they will own cryptos in the future.

The Commission says that cryptos are like any other new investment instrument related to securities, and they are handled in exactly the same way. They are studied and analyzed as new technology and not dismissed outright, as some other parties have done.

The Securities and Exchange Commission has previously restricted Bybit and KuCoin’s operations in Canada, citing securities laws and other regulations.

McDonald’s, based in the Italian-speaking city of Lugano in Switzerland, has started accepting Bitcoin as a means of payment in its restaurant. Switzerland is slowly becoming one of the central European countries in the adoption of cryptocurrencies.

A minute-long video was published on Twitter showing how to pay for an order with Bitcoin at a McDonald’s digital kiosk. The device also had the Tether logo, which was not surprising, as Lugano already started accepting Bitcoin, Tether, and LVGA tokens as means of payment in March.

Lugano allows citizens to even pay their taxes with cryptocurrency. The project also extends to parking fees, public services, and school fees. Already more than 200 local companies are estimated to start accepting payments in the form of cryptocurrency in the near future.

Information about the village of Lugano

Lugano is a small village in southern Switzerland. Lugano has slowly become the cryptocurrency center of Central Europe, where new innovations can flourish.

The goal of the project is to improve the everyday life of the residents and to facilitate daily aspects of business, such as processing payments and accounting.

The city already has a cryptocurrency that is focused on collecting loyalty points. If you spend funds on local businesses, you will accumulate points for yourself in the app, which allows you to spend points on local goods as well.

With Ethereum’s The Merge, some clear reforms can already be seen in, for example, the number of new blocks per day and the average block creation time.

The Merge – changed Ethereum’s operating model from the old Proof of Work mechanism to the Proof of Stake mechanism. Many were skeptical of the change and expected that the effects of the update on operations would be marginal. However, now, after less than a month, there are indications of the positive effect of the update.

A side effect of The Merge: the price of graphics cards started to fall

Computer merchants in China are suffering from The Merge. The price of graphics cards sold in China immediately started to fall after The Merge. Before the update, Ethereum was mined in the same way as Bitcoin, with physical mining equipment. The mining of new blocks depended on graphics cards and the calculations they made. Today, all you need to maintain a blockchain and create new blocks is an internet connection.

Before The Merge, the devices performed demanding calculations, and the successful problem solver was rewarded with Ethereum. Today, you can get a reward by staking your own Ethereum, and equipment is no longer needed to maintain the network. Ethereum’s operation is so extensive that with its updating, the demand for graphics cards has also dropped significantly.

A Chinese merchant has said that during the crypto bull market, there was a huge demand for graphic cards. Now the sales are declining fast.

The worldwide shortage of computer chips and the explosive popularity of cryptocurrencies drove up the prices of graphics cards. Now, with the decline of the crypto market and the upgrading of Ethereum, mining is no longer so interesting. In addition, the price of energy is so high that miners are running a loss-making business. The Chinese market can also be affected by the fact that the state has very clearly banned Bitcoin mining.

The dollar strengthens against Bitcoin

Bitcoin and gold have recently been safe havens for investors in ever-changing market conditions. It is, however, changing as the value of the US dollar appears to be improving, while the price of Bitcoin has leveled off in the $20,000 mark.

The value of Bitcoin is down almost 70 percent from its all-time high, and the value of gold is down 10 percent compared to a year ago. A lot is happening in the world, and investors are trying to keep their portfolios dollar-weighted.

The value of Bitcoin compared to gold has remained at the same readings for a year, but now in the near future, the value of gold has risen significantly higher.

Even though the difference is not very big, it still means that the trend is changing and probably getting stronger with time. According to analysts, the market is so confused at the moment that investors have to think about alternative solutions for gold or Bitcoin.

Even though the value of Bitcoin has dropped significantly, it is still one of the best-performing investments in the last five years. The cryptocurrency market is still relatively small, and according to experts, its value will rise significantly when investors return to the market.

Mt. Gox may be giving Bitcoin back to investors

Throughout history, the stock exchange has promised its customers refunds on several occasions. They have mostly been empty promises. Now, however, the situation is changing, and it is starting to become relevant that investors could get their assets back after all.

Mt. Gox has said that investors have until January 2023 to indicate how they want to get back the invested funds. It would seem that the refund saga is starting to come to an end. The process started already in 2018.

According to an estimate, 99 percent of investors lost their assets in the Mt. Gox collapse in 2014. The lost Bitcoins were then worth hundreds of millions of dollars, and in today’s value, it is billions of dollars.

What happened to Mt. Gox?

Mt. Gox was a Tokyo-based cryptocurrency exchange that operated from 2010-2014. At that time, about 70 percent of the amount of Bitcoins traded in the world went through Mt. Gox. In 2014, the company filed for bankruptcy but has continuously been the subject of legal charges over the years.

Before the stock market crash, customers raised their frustrations with issues related to investment withdrawals. Errors in the system led to the fact that the company did not have certain information about whether payments had been transferred to customers in the correct way.

In February 2014, the company released a statement in which it said it had lost hundreds of thousands of Bitcoins. According to reports, the amount ranges between 650,000 and 850,000 Bitcoins.

The company later found 200,000 Bitcoins, but the missing cryptocurrencies rocked the market so much that the company was forced to file for bankruptcy.

The rest were never found. They may be owned by thieves or permanently lost from the blockchain.

Weekly news
Market insights
Crypto services anyone can use