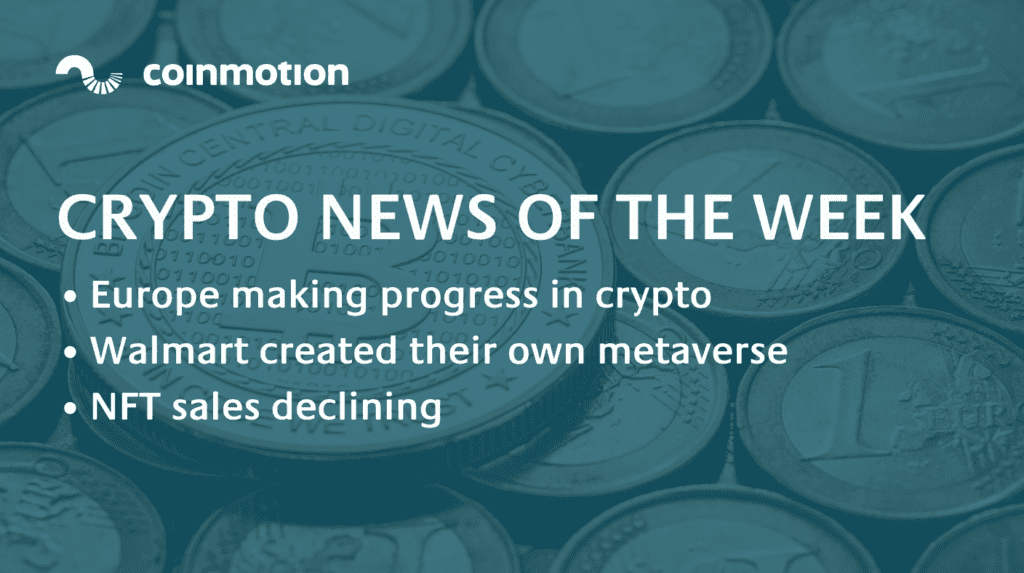 It’s been a great week in terms of crypto adoption: Crypto adoption moving forward in Europe, and one of the world’s largest retail companies is jumping into the metaverse. NFT sales are on the decline, but despite that, Opensea agrees on a significant collaboration.

Crypto investing isn’t always a bed of roses: we also have some bad news. Continue reading to find out more about them.

Countries are investigating CBDCs with BIS

The Bank for International Settlements, or BIS, has decided to cooperate with the central banks of Israel, Norway, and Sweden. The idea of ​​the project is to test making international payments with digital currencies and to explore their possibilities for central banks.

The project is called “icebreaker,” and it aims to manage cross-border payments – reducing costs and increasing speed and transparency. The project is estimated to end in the first quarter of 2023.

BIS manages part of the international currency reserves. It can be considered as the central bank of central banks, so to speak.

The project and its purpose were explained in a press release published on September 28. Central banks want to investigate what kind of uses digital currency can enable for payments that cross national borders.

“Efficient and accessible cross-border payments are of extreme importance for a small and open economy like Israel, and this was identified as one of the main motivations for a potential issuance of a digital shekel,” said Bank of Israel representative Andrew Abir.

According to BIS, the previous pilot testing was a success. Hong Kong, Thailand, China, and the United Arab Emirates participated in the pilot. In the month-long test, 22 million dollars in payments moved over the border.

BIS acts as the holder of foreign exchange reserves for central banks around the world. It is located in Switzerland, and its sphere of influence includes 60 different central banks.

At the end of 2000, the number of reserves deposited in BIS was about 7 % of all the world’s foreign exchange reserves. BIS also offers itself to central banks as an investment bank in order to get a higher return on their reserves.

Walmart dives into the metaverse

Walmart – an American retail chain and one of the world’s largest companies – has now taken its first steps into the crypto world by publishing Walmart Land metaverse and creating Walmart’s own game universe in Roblox.

The users get to experience Walmart in a completely new way in the digital world. The virtual reality Walmart has everything from movies to fashion. According to Walmart, there’s something fun for everyone to do in the metaverse.

Later in the fall, various concerts will be coming to Walmart Land, where users will be able to see musical performances by artists.

There have been rumors and speculation around Walmart’s metaverse venture for a long time, as the company registered a patent for its own digital currency and token already in December 2021. Now the rumors have been confirmed.

NFT sales are down 98 percent from January

Compared to January, the volume of NFT trading has decreased by 98 % in terms of monetary value. The assessment was compiled by Dune Analytics, and the assessment takes into account NFTs in different blockchain ecosystems.

Even though the trading volume is in a really wild decline, the number of wallets owning at least one NFT has almost doubled compared to the beginning of the year. The NFT market has changed enormously in less than a year, and today OpenSea is again at the top in terms of the monetary value of trading.

Ethereum has been the most common currency for NFT trading. Its recent decline has also affected the prices of NFTs. Currently, one NFT costs an average of $285, while back in January, the average price was around $2,000.

The continuous development of the NFT market has not changed the situation very much. Although the number of wallets owning NFTs is increasing, the weekly trading volume is constantly decreasing.

SWIFT and Chainlink to cooperate

The cooperation between SWIFT and Chainlink enables the SWIFT network to access almost every blockchain. This enables traditional banking and digital financial operations through one service.

Chainlink is a so-called oracle that brings information to the blockchain from the outside world in real-time. SWIFT carries out communication between banks, so with the help of said cooperation, Chainlink gets a huge amount of new data for the blockchain.

Various institutions have a growing interest in digital financial products. At the moment, only a few operators offer a good channel for investing, and therefore more such joint works are needed.

With the help of the services offered by Chainlink, SWIFT can send messages to almost all blockchains and thereby enables trading even more efficiently. One of the founders of Chainlink believes that SWIFT cooperation will increase the use of blockchain technology in the capital market and in traditional finance.

The recent trend has been to make it easier for institutions to access the crypto market. We reported last week that the stock exchange NASDAQ is also planning to offer crypto services.

What is an oracle?

Oracles like Chainlink provide a way to connect existing data sources and blockchains together. With the help of smart contracts, it is possible to bring data from traditional sources, such as the stock market, into the blockchain.

Blockchains cannot reach all the information in the world by themselves, and therefore oracles are used in various activities. Blockchains are able to operate safely and quickly in their own network and information is retrieved elsewhere.

Warner Music and OpenSea to cooperate

On September 29, Warner Music Group announced its cooperation with the NFT marketplace OpenSea. The purpose of the cooperation is to offer artists the opportunity to build their fan community in the Web3 world.

According to the publication, the selected artists have the opportunity to test new features in advance, which enables e.g., publication of NFT collectibles and other projects.

OpenSean’s Shiva Rajaraman says NFTs bring new opportunities for artists and musicians to build communities, connect directly with fans and express themselves across borders in all different languages.

The first NFT compilation is currently in the works between Warner Records UK and Probably Nothing. According to Warner Music, this collaboration shows that the company is putting effort into the development of Web3 technology to support musicians.

For the first time in two months, Bitcoin mining difficulty is decreasing. Miners have been selling large amounts of Bitcoin recently, up to 8,500 per month.

The more miners there are on the blockchain, the more difficult mining is. The recent rise in the electricity price has put miners in a difficult situation and many have had to give up mining.

During the summer, when the price of Bitcoin was low, the miners had taken more Bitcoin for themselves, but since the beginning of autumn, it has been the opposite. Many miners sell more Bitcoin than they receive in reward. That means they are selling previously mined Bitcoins to cover the expenses.

Their actions have even received media attention, as they have been reported on and their activities have been analyzed as a result of the fall in the price of Bitcoin, the rise in the price of energy and the increase in the difficulty of mining.

According to analysts, the situation will get even worse for miners. Bitcoin is falling against the US dollar and the changes in the price of electricity do not particularly help. The more electricity costs, the bigger the miners’ costs. If at the same time the price of Bitcoin falls, the miners will find themselves in an increasingly worse situation.

However, this is not the first time that Bitcoin miners make a momentary loss. Historically, patient miners have always been rewarded even after a long period of losses.

Bitcoin’s network changes the difficulty of mining based on how much computing power the network has. The more miners there are, the harder it is to get a reward and the blockchain is also more secure.

Ford joins the metaverse & Terra Classic on the rise