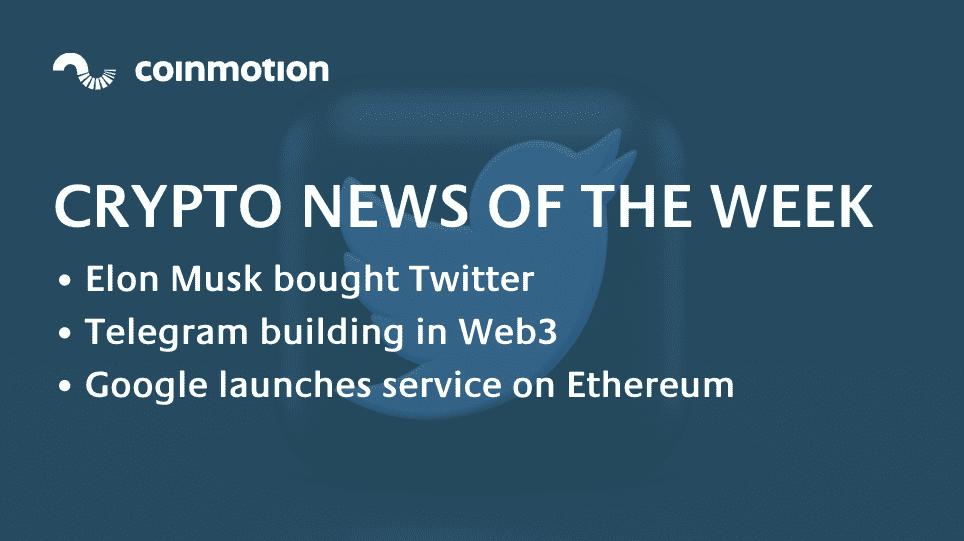 What does Elon Musk buying Twitter mean for cryptocurrencies?

The crypto world is buzzing, not least because of Elon Musk’s Twitter deal. In addition to “Chief Twit,” the week’s most discussed topics were Google’s Ethereum-based node service, Bitcoin’s correlation with traditional assets, and smart contract hacks.

After months of drama, legal battles, and social media speculation, billionaire Elon Musk has finally bought Twitter. The price for the acquisition is estimated to be 44 billion US dollars.

Musk announced the acquisition in his familiar, unique style by tweeting, “Entering Twitter HQ – let that sink in!” The tweet is accompanied by a video of Musk carrying a sink to Twitter’s headquarters.

Musk, who is known for his quick actions, did not delay after the purchase: he fired almost the entire board, including CEO Parag Agrawal and CFO Ned Segal.

Musk hinted about his idea to buy Twitter back in April. In April, Musk bought just under 10 percent of the company’s shares for over $3 billion. Less than two weeks later, the declaration became true, and it started a months-long legal battle between Twitter and Musk.

Twitter accepted the deal, but Musk backed out, citing the platform’s bot problem. The deal already seemed to go south completely, but things turned out favorably for Musk, and he can now call himself the owner of Twitter as he does.

There is a lot of speculation about Musk’s agenda, but he has said that freedom of speech is his biggest reason for buying Twitter. In his opinion, people should have an unbiased discussion forum where anyone can share their own opinions without fear of being silenced.

There have also been rumors that cryptocurrencies are somehow involved in the development of Twitter. One popular topic of speculation is that users could identify themselves with crypto wallets in the near future. If this is true, Twitter could become a Web3 platform.

What does Musk’s Twitter purchase mean for the crypto world?

Twitter has long been the center of all cryptocurrency-related conversations. In the crypto world, things happen at a furious pace, so in order to stay up-to-date, an investor needs to get the latest information in his feed immediately. That’s why Twitter, which is based on the rapid distribution of information, has become the most popular platform for cryptocurrencies.

Musk is known as an advocate of cryptocurrencies and especially Dogecoin. Musk aims to bring “new features” to Twitter, “increase trust” by making “algorithms open source,” “defeat bot accounts,” and “authenticate all users.”

The purchase divides opinions, but the general assumption seems to be that Elon Musk should be good for Twitter and the entire cryptocurrency ecosystem. A hot topic for the crypto community has naturally been what the change in ownership means for crypto Twitter.

One of the most obvious changes is censorship. The Tesla billionaire has repeatedly stated that his primary motivation for acquiring Twitter was to promote free speech and dialogue worldwide. This is good news for the crypto ecosystem, as Twitter has become a hub for crypto cultural activity. The industry can use Twitter as a tool for growth in the future as well.

Musk has also talked about the introduction of crypto payments on Twitter. In Musk’s opinion, the platform could be turned into an “everything app.” Twitter seems to be currently working on integrating crypto wallets, meaning Musk’s vision is becoming a reality. It wouldn’t be surprising if Twitter enabled payments in Dogecoin, as Musk has teased several times.

The third change brought by Musk is (hopefully) the removal of bots. Twitter is infamous for having millions of bot users, and they cause a real nuisance, especially on crypto Twitter. They trick people into clicking on malicious links, and they completely take over the comment sections of popular tweets.

Bitcoin is considered a safe investment

Although the crypto market has not looked very glamorous compared to last year, investors still consider Bitcoin a safe investment. This year, Bitcoin has been strongly correlated with both gold and the S&P 500 and Nasdaq 100 indexes, which is why it is seen as a “safe haven” for investors.

Historically, investors have always bought gold as security for their investments during recessions. The correlation between Bitcoin and gold is constantly increasing, which indicates the changing behavior of investors toward Bitcoin.

According to some reports, a global economic recession might be on the way. This increases the demand for investment instruments that fight inflation, such as gold or Bitcoin. Although Bitcoin has lost 70 percent of its market value during the bear market, investor confidence seems to have been restored recently, and the flow of capital may be reversing.

Inflation means a weakening of purchasing power. For example, the current energy crisis raises all consumer costs when the price of production rises. Ultimately, the increase in costs is reflected in the consumer’s wallet, who can buy fewer goods with the same amount of money as last year.

Inflation is a very comprehensive thing, and it is most affected by the amount of money in circulation. Over the past few years, central banks have been creating money out of thin air, constantly introducing more money into the market to keep it from collapsing. As a result, the value of money decreases, and it can be seen as increasing inflation.

So what is the role of Bitcoin in this equation? The answer is easy: you cannot create more Bitcoins. It represents digital scarcity. Only 21 million Bitcoins can ever be created.

Bitcoin’s value is based on supply and demand. As the demand for Bitcoin increases, its value increases. When investors no longer want to sell their holdings at the old price, their value increases even more. In the end, there are so few Bitcoins that not even all the millionaires in the world could own one whole Bitcoin.

Because Bitcoin is scarce, it helps investors fight inflation in the long run. Measured in euros, the price of commodities increases every year. Measured in Bitcoin, their price has decreased every year.

The well-known messaging application Telegram has announced that it will launch a Web3 marketplace on its platform. The marketplace auctions premium usernames that are authenticated on the blockchain.

However, Telegram says that usernames are in no way NFTs. According to the company, the code is somehow different, or at least an attempt has been made to make it different so that usernames cannot be equated with NFTs.

With the help of the marketplace, Telegram intends to monetize the exchange of premium usernames by publishing a wide variety of interesting usernames. If the project is successful, Telegram will increase its scope to emoticons, channels, and stickers.

Why would you pay for a username?

With simple names, it is possible to stand out from the crowd, especially if the names are acquired early enough, whether it’s a website name, an Instagram user, a license plate, or a Telegram username.

Telegram is a secure instant messaging system, and it is easy to change usernames, even at a fast pace. What if you could buy yourself a username with, for example, your company name or your own name?

On Thursday, Google announced its plans to release a node engine based on cloud services for projects running on Ethereum.

Nodes operating in Google’s cloud services are safer compared to your own computer or server.

A node is a computer that runs a blockchain program. The program’s job is to accept transactions and add information to the blockchain. At the time of publication, Google says it only works for projects running on the Ethereum blockchain.

The publication is another example of the tech giant’s growing interest in Web3. Many companies are switching to products built around blockchains. Google said at the time of its release that blockchain technology is a world-changing way to store and transfer information.

15 scams per hour in the Web3 ecosystem

Solidus Labs has studied twelve of the most popular blockchains and found that the majority of crypto scams are done on the BNB blockchain.

The Web3 environment and cryptocurrencies are constantly the target of scams. According to Solidus Labs, up to 15 new “scam projects” are released every hour.

Since October 10, the company has been monitoring the largest blockchains. The company has even noticed more than 188,000 smart contracts with the purpose of deceiving users.

One of Solidus’ executives said that big scams and “rug pulls” get news, but that’s only a small part of the whole picture. Most of the small scams never make it into the news, and there is constantly more dishonest activity.

According to the analysis, the idea behind fraudulent smart contracts is to steal investors’ funds and manipulate the market. A project can copy the name of a popular project, allowing an unknowing investor to unknowingly buy the wrong cryptocurrency, after which the scammer can take the investor’s money.

Cryptocurrencies related to scams are not only a source of fear for investors, as even reputable blockchains are constantly attacked. We reported two weeks ago that October had been a historical month in terms of blockchain hacks.

0 Comments
Inline Feedbacks
View all comments
PrevPreviousUniswap is preparing for the NFT and Web3 markets
NextTechnical Analysis: Is Altseason a Possibility?Next
Sign up