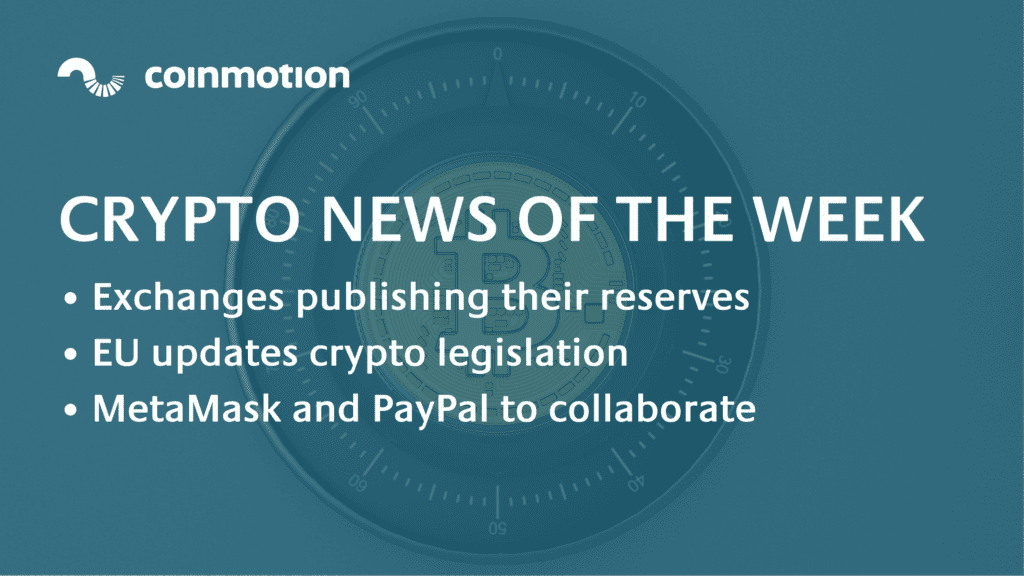 This week, the crypto world has discussed the reserves of crypto exchanges and especially Binance, the cooperation between PayPal and MetaMask, the reduction of emissions made possible by VeChain, the Bitcoin mining of electricity companies, and the EU’s anti-money laundering measures regarding cryptocurrencies.

Read the most interesting topics of the crypto week in this article.

Experts have criticized the report for its lack of depth. Shortly after the report was released, Reuters reported that US prosecutors were considering criminal charges against Binance and its individual executives, including founder and CEO Changpeng Zhao.

Many investors pulled their funds out of Binance after the news, fearing another FTX-like collapse. According to data from analytics company Glassnode, Binance’s reserves decreased by $3.5 billion within 24 hours. Customer funds were withdrawn for more than a billion dollars.

The news caused a similar bank run effect in other stock exchanges. Bitfinex had the second largest amount of customer funds withdrawn, although the amount was significantly smaller than Binance.

Binance’s assets are around $64 billion in total, so in the end, it’s not a worrying number, even if it is a significant change in confidence among investors.

Binance CEO Zhao tweeted that negative comments should be ignored. Despite this, the company has not officially commented on the accusations publicly. He also said it is “a good idea to stress test withdrawals on each CEX on a rotating basis.”

Why is the wealth of the crypto exchanges monitored?

A large part of the assets of FTX, founded by Sam Bankman-Fried, was tied to the exchange’s own FTT token. In addition, it had loaned its clients’ funds to another company owned by Bankman-Fried, Alameda Research.

FTX was insolvent in the event of a major bank run and therefore collapsed. When thousands of users wanted to withdraw their own investments from the service at the same time, the exchange was unable to pay and froze the withdrawals.

After the events of FTX, many crypto exchanges and services adopted policies on proof of reserves, which brings transparency to the market and security for investors.

Binance was one of the first players to make its wealth transparent, but that has put some analysts on their toes, and the exchange has faced accusations of money laundering.

The European Union has decided to limit the purchase of cryptocurrencies with cash to 10,000 euros. The EU will be more attentive to purchases of cryptocurrencies over EUR 1,000. The matter was announced for the first time on the seventh of December. The main theme of the decision is to prevent money laundering.

Czech Minister of Economy Zbyněk Stanjura said that loopholes in cryptocurrency legislation will be closed, and EU member states will set even more precise rules regarding cryptocurrencies.

It is not yet certain how the changes will affect DeFi services, for example, but some changes can certainly be expected. The processing of the matter is affected by the fact that the decentralized services are not necessarily in Europe, and the individuals behind the operation of the services are not known.

If decentralized services are to be restricted, it will slow down the development of decentralized financial services in Europe. Large and centralized exchanges can advance their own development as long as they operate in accordance with the regulations, which is considerably easier for local operators.

MetaMask and Paypal to cooperate

The functionality has been announced as the first Web3-focused measure that PayPal will use to enable more consumers to enter the Web3 ecosystem.

VeChain to reduce the carbon footprint of companies

The organization behind the VeChain cryptocurrency has launched the VeCarbon platform. VeCarbon is a blockchain-based accounting software that helps states achieve carbon neutrality, reach their consumption goals and achieve their sustainable development goals.

The more companies join VeCarbon; the more accurate and better carbon dioxide data can be collected. This also enables the development of VeCarbon. Data is obtained from, among other things, packaging, logistics, materials, and procurement.

VeChain makes it possible to track different product chains on the blockchain, which has been really complicated and difficult in the past.

With additional electricity production, the company can make more profit, and it has been innovatively decided to use it for Bitcoin mining. There is no similar news about electricity companies, although energy companies have sold their excess energy for Bitcoin mining to other companies at a lower price. When electrical energy is used for good in this way, environmental harm is reduced, and miners have access to cheaper energy.