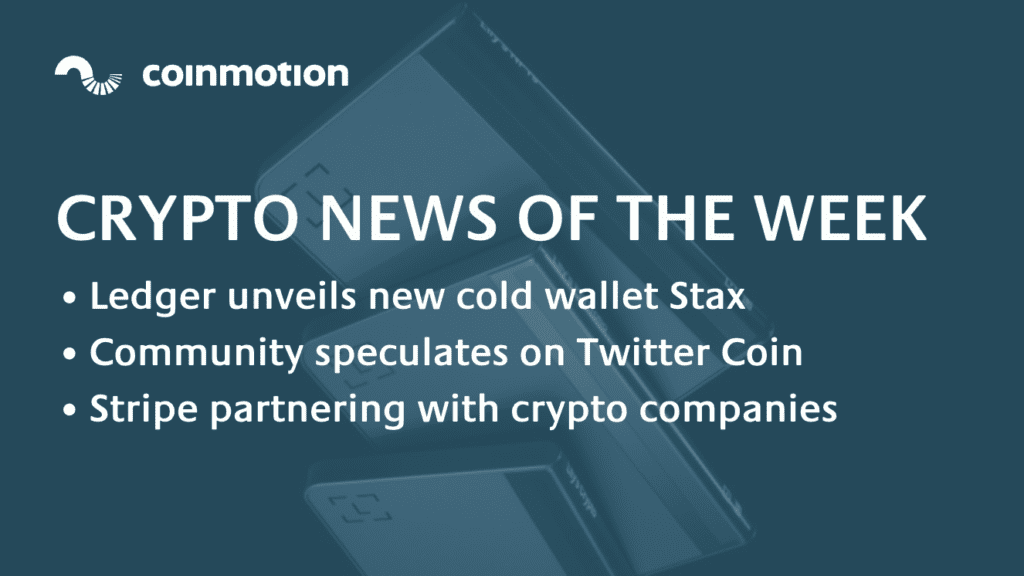 Ledger’s new cold wallet, Twitter Coin, and Stripe entering into collaborations were among the week’s main news in the crypto world.

Other topics related to cryptocurrencies include:

Ledger unveiled a new wallet — designed by an Apple legend

Ledger has revealed that it is making a new cryptocurrency wallet with Tony Fadell. Tony Fadell is, among other things, behind the design of the Apple iPod and iPhone.

The new device is called Ledger Stax. It is designed with Ledger’s secure architecture, and its idea is to guarantee unprecedented accessibility to the world of cryptocurrencies and NFTs.

Ledger Stax will be the size of a credit card and will allow users to store and manage up to 500 different cryptocurrencies and their NFT collections. The release of the device is planned for the first quarter of 2023.

The new wallet arouses interest due to its appearance alone. Previous Ledger models resembled a USB stick with a small digital display and two buttons. On the other hand, Stax is more like a tiny smartphone in design, and a large digital touch screen completely covers one side.

It is possible to connect Ledger Stax to computers with a USB-C connection and to the Ledger Live mobile application on different smartphones using Bluetooth. Ledger’s application under development, Ledger Connect, will enable connecting the wallet directly to Web3 applications.

The price of Ledger Stax is 279 euros. It is the company’s most expensive product to date.

The new wallet responds to growing consumer demand. Ledger saw the highest demand for its products in the days after the FTX crash, and November was the company’s most successful sales month. Ledger’s growth looks good and has been so in the past. Since 2014, the company has sold more than 5 million products to more than 200 different countries.

According to speculations on various Internet discussion forums, Twitter is planning a new cryptocurrency called Twitter Coin. The assumption is reasonable, as there have been rumors about Twitter introducing other cryptocurrencies on the platform. For example, Dogecoin, favored by Twitter owner Elon Musk, is expected as a payment method for the social platform.

Researcher and blogger Jane Wong previously tweeted a logo that many believe to be Twitter Coin’s logo. Wong later tweeted about paying and tipping on Twitter as well. However, Wong’s account was deleted after the tweets. Researcher Nima Owji also tweeted about Twitter’s new hidden features related to cryptocurrencies.

A few Twitter users have speculated that Twitter Coin would be related to Dogecoin and its greater acceptance. However, neither Elon Musk nor Twitter has given official comments on the matter.

Long before the acquisition of Twitter, Musk had been a big advocate of Dogecoin, and the dog-themed cryptocurrency got a big boost every time Musk tweeted about it. Dogecoin’s price rose by 6% after the rumors of Twitter Coin.

However, the changes taking place on Twitter are quite uncertain. For example, Google and Apple have stated that such significant application changes could be against the terms of use of their app stores.

Violating the terms of use of the app stores would result in Twitter possibly no longer being downloadable from them. However, Musk has given his answer that he will make his own phone and app store if Google and Apple remove Twitter.

Metaverse platform Decentraland has announced a new feature that allows users to rent virtual plots or properties they own to other users. Users can therefore earn passive income with their holdings in the metaverse.

Decentraland’s followers on Twitter have hinted at a similar rental possibility for the accessories worn by the characters as well.

Stripe to cooperate with cryptocurrency companies

Stripe released an add-on that allows businesses worldwide to provide users with an easier way to exchange regular currency for cryptocurrency. The add-on can be easily customized and connected to different applications, which enables extensive cooperation with different operators.

Stripe says that although there have been significant changes in the cryptocurrency market in a positive direction, it is challenging to get end users involved in daily operations and within the scope of Web3 services. In the end, the difficulty of reaching end users can be related to many things, and Stripe wants to be developing systems that are accessible to all people.

A ban is proposed for cryptocurrencies with a large carbon footprint

Fabio Panetta, an official on the board of the European Central Bank, has proposed a ban on cryptocurrencies, which have a notable environmental impact.

Panetta told London Business School’s Insight Summit that international legislation and unified taxation of cryptocurrencies could improve energy efficiency. He also added that cryptocurrencies, which have a significant environmental impact, should be outright banned. In this case, he refers to cryptocurrencies that work with mining.

Restrictions on mining cryptocurrencies and blockchains have generally been the most significant driver of legislative changes. A lot of electricity is used in mining, the environmental impact of which is to be limited.

The holdings of Bitcoin miners have generally been correlated to the price of Bitcoin. When miners have to sell their holdings, more currency comes into the market for supply, which causes selling pressure on the exchange rate.

Now, however, miners’ wealth is at a 14-month low. This information suggests that the value of Bitcoin will not be significantly affected in the near future, at least by the holdings sold by the miners.

Recent changes in the price of Bitcoin and other cryptocurrencies, as well as rising energy costs, have forced miners to sell some of their Bitcoins to cover the costs of their operations. 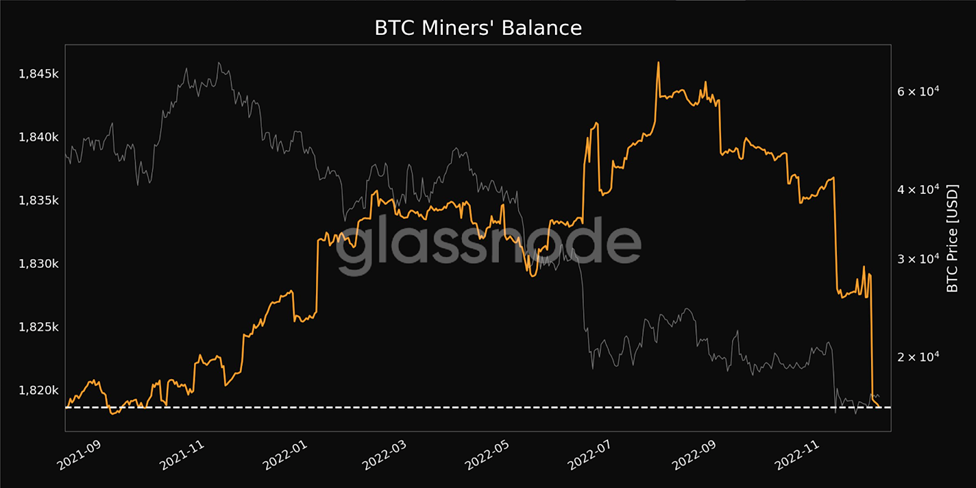