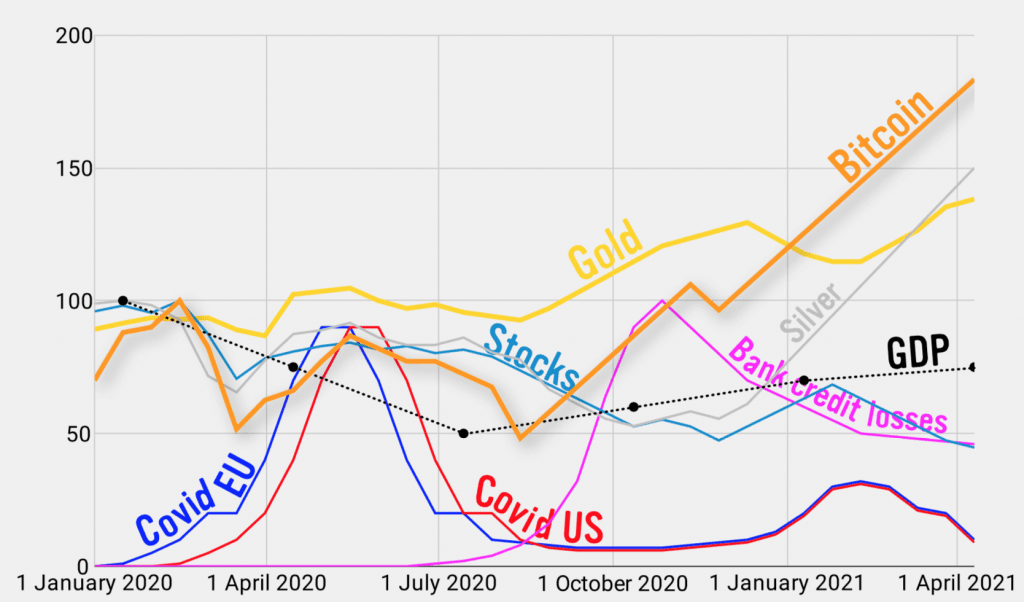 Bitcoin / How does Bitcoin behave in relation to the U.S. market?

How does Bitcoin behave in relation to the U.S. market?

Investment markets can be analyzed in many different ways, and understanding them is key to long-term investing in bitcoin. One method is to analyze the markets based on their historical price development. This article will present one example of such a study based on historical price data. Let’s make a light analysis about how BTC price behaves when the markets rumble — specifically, how bitcoin behaves in relation to the U.S. market.

Bitcoin in relation to the U.S. market: The premise of the study

This analysis will compare the United States S&P 500 futures as well as Bitcoin/USD (Bitfinex) price development. Let’s assume that investors have both stocks and bitcoin in their portfolios. Bitcoin is generally regarded as a riskier investment than stocks, so according to the premise, investors will sell their bitcoins earlier than stocks when a crisis situation emerges on the markets. The premise states that the crisis is first belittled by the media, while professionals sell a part of their stock portfolio to retail investors. After this, the S&P 500 futures reach their peak and the crisis phase begins, leading to a real downturn in the markets.

Based on the assumption, investors should then give up their bitcoins faster than stocks. In other words, bitcoin’s price should drop immediately as the crisis begins, which means bitcoins are sold either before the stock market peaks or simultaneously when the S&P 500 futures begin to decline.

But in turn, as the market begins to rise (assuming that bitcoin investors also take higher risks) it could be presumed that bitcoins are bought earlier than stocks. This is because the S&P 500 as a bigger index usually reacts slower to changes, meaning situations in which the crisis is regarded to be over. Therefore bitcoin’s price rise would be expected to begin a bit earlier than the price rise of S&P 500 futures.

The next year the S&P 500 futures reached new peaks on 19.5.2015. At the same time, bitcoin made a smaller peak on 9.5.2015. This peak was, however, not comparable in this study since bitcoin’s peak is rather hard to interpret. S&P started its own rise from the bottom on 24.8.2015, meaning roughly four months after the peaks. Bitcoin in turn started its rise already on 18.8.2015. In other words, this rise began 8 days before the S&P 500 futures began their own rise from the bottom values.

In 2019 the S&P 500 futures saw their peak on 1.5.2019. Bitcoin did not have a comparable peak value during this period, since bitcoin’s price was heavily rising at the time. The S&P 500 futures reached their bottoms on 3.6.2019, which was followed by a new rise. Bitcoin in turn reached its bottoms on 6.6.2019 three days after the S&P 500 bottoms. This was not in accordance with the premise.

This year in the midst of the worst COVID-19 pandemic the S&P 500 futures reached their peaks on 20.2.2020. Bitcoin’s dollar price in turn reached its peak already on 13.2.2020, meaning seven days earlier. Bitcoin’s price saw its bottoms on 13.3.2020, after which it entered a new rise. The S&P 500 futures in turn didn’t rise until 23.3.2020, marking ten days after bitcoin’s bottoms. Once again we found similarities with our earlier observations.

Bitcoin in relation to the U.S. market: Study results

The premise of the study was not fully met, but we still managed to gather good information about the markets. The study concludes that as the S&P 500 futures reached a bigger price peak, bitcoin did not in the following days see peaks or notable declines which would be directly comparable with the price development of S&P 500 futures. Thus bitcoin investors may not during crises get rid of their bitcoins when the S&P 500 futures begin declining. At least signs of this were not observable based on market price development during the years 2014-2020.

In turn, during rising markets, there were clear signs of bitcoin’s price starting its own rise in five cases out of seven roughly 7-10 days before the S&P 500 futures. This data in turn corresponded with the study’s premise. This may indicate that bitcoin’s rapid rise from its bottoms would usually start 7-10 days before the US stock markets begin rising. Therefore when the markets have met their bottoms during crisis phases, bitcoin investors begin their own buying. And around a week after this shift, the bigger markets such as S&P 500 begin their own shift phase.

So how does bitcoin behave in relation to the U.S. market?

So if we generalize a bit, bitcoin’s own price rise would predict the rise of the S&P 500 futures around 7-10 days before the real market shift in the United States. Perhaps this generalization goes too far, but this is the conclusion this study reached. We gained some insight into how the bitcoin price behaves in relation to the U.S. market.

It’s still good to remember that the sample of this study was very small, so the results can not directly be generalized with real market situations. In addition, the study includes many assumptions and generalizations, so they should not be interpreted as proper buying opportunities for any investment instrument.

Nonetheless, here is one example of how the markets can be analyzed rather easily based on historical price data.