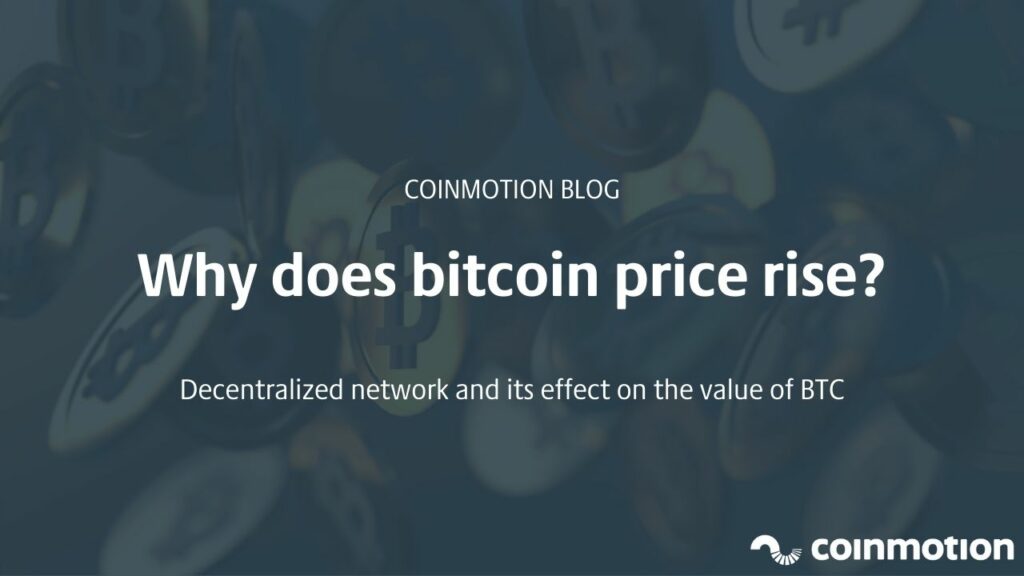 Bitcoin / How does Bitcoin price rise? Own world, own rules

How does Bitcoin price rise? Own world, own rules

Bitcoin price goes up and down according to general market laws. At the same time, bitcoin has unique features that other assets don’t. So how does the bitcoin price rise and what is it based on? We review the key factors that are the features of the BTC network.

Example from the music industry: Cheek

Let’s taken an exemplifying case from the Finnish music world. Cheek, who was perhaps one of the biggest entertainment stars of the 2000s, had a career inspiring both love and hate. Nonetheless, Cheek changed the entire industry in Finland. The artist tended to sing about his own world and own rules.

In contrast to mass culture, Cheek or Jare Henrik Tiihonen was regarded as overly arrogant and too capitalistic for Finland. That is because Cheek believed one could become wealthy and successful with one’s own work. While Cheek’s music irritated many, everything was still based on a solid basic structure.

Cheek always managed to fill Finland’s biggest arenas. His name was in all kinds of music industry publications, his own movie, books, and many sold records. He was also the most famous Finn internationally despite singing in the native tongue. Cheek even surpassed historical Finnish figures such as Mannerheim, Sibelius, and Kekkonen. In 2017, Cheek finished his musical career, and yet, it can be an interesting case to help us understand bitcoin price ups.

Why was Cheek so popular then?

1. The basic things were in order. Excellent mother tongue skills, exceptional sense of rhythm, as well as voice control and its use.

2. Cheek also excelled in more than one genre. He combined elements from the 90s, gangsta, comedy, bling, chopper, west and east coast. The screaming sounds are familiar from rock and heavy music.

3. In terms of production the quality was top-notch even on international standards.

4. Additionally, the lyrics were also approachable, timely, and often very personal. The listeners could easily relate to them and become affected.

5. Cheek also had very good skills in marketing and sales.

6. And the foremost: He wasn’t alone. Cheek had a very capable network in the background, which enabled the birth of a brand and successful business.

This nature of Cheek, which we could even characterize as megalomaniac, led to his own world. In that world, high criteria applied to the artist, entertainment, and music production. For the Finnish music business, this meant new rules just had to be accepted. The domestic music markets were never the same after the birth of this new world and its own rules.

How does Bitcoin price rise: its world, its rules

What about Bitcoin then, which in its own market has provided continuous entertainment? The central thing is not how much Bitcoin’s price has risen. The more important thing is Bitcoin’s basic structure, enabling growth and new procedures with higher criteria.

So does Bitcoin have a strong basic structure with its own world and rules?

Next, we will answer the question of what bitcoin price rise is based on by checking a few of Bitcoin’s own rules:

In contrast to many companies, the Bitcoin network does not have a board of directors or CEO. Therefore Bitcoin’s future development and its direction are not dependent on a small leadership group, since such centralized management does not exist.

Instead, Bitcoin’s decision-making is decentralized. This means Bitcoin’s peer-to-peer network does need a centralized authority to decide over the network’s future development goals. Instead, Bitcoin is developed in the best way possible simply by the network’s inbuilt features. In other words, Bitcoin does not need a centralized third party since the network works consistently without any need to trust third parties. The currency called bitcoin also has an essential role in settling Bitcoin’s consensus mechanism and blocks, which ultimately represents Bitcoin’s complete event history (or blockchain).

In relation to the Bitcoin network’s function, it is good to understand this decentralized decision-making process a little better. Anyone who partakes in the Bitcoin network by operating nodes independently checks every event and every block. In this way every node gathers its own independent version of the blockchain, resulting in what we can call decentralized decision-making. Unity in decisions is achieved when every node verifies every event based on the basic rules and the longest chain wins.

If, in turn, the node sends an event or block that does not abide by consensus rules, it will be rejected as invalid by other nodes. Therefore the best solution for the Bitcoin network always wins. This rule has worked exceptionally well so far in history.

One of Bitcoin’s most central own rules is block reward halving. Halving refers to a feature programmed in the Bitcoin protocol, which is to keep the bitcoin supply stable and also protect against inflation. In practice, this means that miners who maintain the Bitcoin network are awarded half the bitcoins compared to before. At the beginning of 2020, bitcoins were born in groups of 12.5 units, roughly between 10 minutes, but after halving in spring 2020, only 6,25 units were born at the same time.

Shielding oneself against inflation, meaning money losing value, has been a critical question for many investors especially in modern times with low interest rates. As a result, it has been hard to yield profits exceeding inflation for invested deposits. Bitcoin has at least so far been a very positive exception to this.

When Bitcoin’s supply has halved every four years it has also every time resulted in Bitcoin’s demand growing. Every time.

3. How does Bitcoin price rise? The network effect

You’ve probably heard of how a common goal where everybody wins creates good conditions for the success of almost any project. Therefore every part of the community benefits from the development of such a common project.

The Bitcoin community has common goals and achieving them benefits all parties of the community. Such goals are, for instance, the undisturbed operation of the Bitcoin network, developing a functioning payment system, protection from inflation, and expanding the community in numbers. Other goals, particularly for investors and traders, are bitcoin commerce and sufficient volatility, which both enable reaching better profits. Also, holders, or so-called hodlers, have an essential role since they stabilize the market. Hodlers regard Bitcoin as a store of value, which forms a kind of bottom level below which the price can not fall for extended periods. At least theoretically.

The increased use of the Bitcoin protocol also increases the workload of developers responsible for the Bitcoin network’s technical development. The opportunities for such challenging and rewarding projects attract even the most skilled developers to join Bitcoin. Therefore Bitcoin’s surprisingly durable basis for technological development has been enabled. Bitcoin’s price rise, in turn, has led to a lot of visibility, which in turn attracts further interest to join the industry.

It is still worth noting that Bitcoin’s price rise also attracts other kinds of actors on the markets. While these actors may not have the community’s best interest in mind, they are usually weeded out during bear markets. At least so far, this has been the case.

Conclusion: How does Bitcoin price rise

Bitcoin’s own rules have remained relatively unchanged already for over ten years, so they have had time to create their own world. Opinions may vary on the strength of its basic structure, but Bitcoin still undoubtedly has its own world and own rules on the market.

Besides that, bitcoin’s value, of course, also tends to act like many other asset types. E.g., BTC prices can react to US markets or to FED printing more dollars. When negative or positive news related to bitcoin comes out, they can cause the price to rise or drop as well. For example, news articles about bitcoin’s environmental impact tend to cause temporary dips every now and then.

It’s good to remember that people and businesses built by people have a story involving rising and falling. And sometimes it also ends. Cheek ended his music career relatively young, referencing back problems as one reason. Many also thought his standards were too high for one person to upkeep. And perhaps it was so. But Bitcoin is not a person, nor is it completely controlled by people. Instead, it is a combination of machine and human, a kind of hybrid. And that is something completely different which we have not yet seen.

Maybe Bitcoin will never fill arenas full of cheering people like entertainment stars, but it has definitely created its own world and its own rules within our world. The future will reveal how well this world and its rules will last — and what the bitcoin price rise is based on in the future. The past has certainly demonstrated that nothing is certain — and investing in bitcoin long-term is an exciting journey.